In the latest issue of the Chinese Media Watch we focus on how the Chinese media reported on the American military convoy in Eastern Europe, the position of the Baltic States in the stand-off between Russia and the West, the possibility of Greece shifting to Russia’s orbit and the current Sino-Russian relations.

Click here to read this issue of the Chinese Media Watch 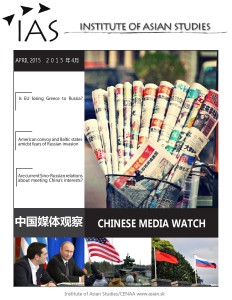