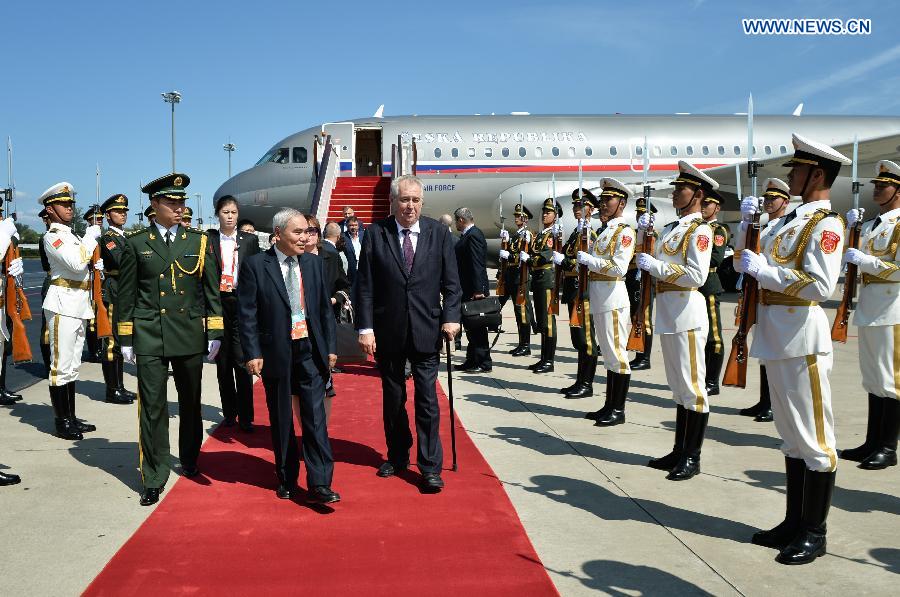 In a long analytical article from Guancha, an online news and comments aggregator in China, Zeman was described as a wise, rational and down to the earth politician. An abbreviated version of this analysis has been reposted by major Chinese media such as Sina. This article claimed Zeman to be a leader with independent thinking and conduct (特立独行) by listing the facts that Zeman openly criticised the US in issues like Iraq war and the EU in alienating Russia. Meanwhile, Zeman was described as neither radically anti-America nor blindly anti-Russia (过去几个月，我一直在和反俄的傻瓜们抗争，但最近还得跟反美的傻瓜们斗), which built the image of a rational and mature leader. Besides, what is even more important for Chinese readers, Zeman seems to be a rather pragmatic (务实) president who knows how to bring economic growth for his country. It is said that Zeman believes that a multi-lateral economic diplomacy leads to stability, thus he has been supporting the economic cooperation between China and the Czech Republic since he took the office. None of these reports mentioned Zeman’s personal habits of smoking or drinking, which are often discussed in Czech media reports.

Czech Republic, at the same time, was described as a country which has a similar traumatic history as China and now attempts to draw a line between itself and the West. “One hundred years of humiliation” (百年历史屈辱 ), which is a term often used to summarise the contemporary history of China, was borrowed to sum up the turbulent Czech 20th century destiny between Germany and Russia. This rhetoric would easily arise sympathy and an “us” feeling among Chinese. Besides, when it comes to the divergent routes of the Czech Republic and China after 1989, the Czech Republic was presented as a victim of the western neo-liberal pitfall (“捷克奇迹”很快沦为“捷克陷阱”，经济学甚至添加了“捷克病”的词条; 捷克又成为西方经济体系中的受害者之一), in the sense that the Czech economy has suffered in the 2008 financial crisis before it even ever took off. Regarding the current situation, Chinese media quoted Hajek, consultant of former president Klaus that Zeman’s decision shows that the Czech Republic is still a sovereign state (表明捷克共和国依然是一个主权国家) and the Czech Republic does not have to satisfy all the requirements of the EU and the US (捷克不应满足欧盟和美国的所有需求). This quote delivered a message that the Czech Republic, the heart of Europe (欧洲之心) that used to enjoy a strong industry (工业强国), is going to take charge of its fate in its own hand.

Another message the Chinese media seems to deliver is that Zeman’s presence at the parade shows an even brighter future of the multi-level cooperation between China and the Czech Republic compared to last years. Last October, Zeman has taken a business group to China and made cooperation agreements on finance, medical treatment, aviation, mining and other fields. After the parade, there are reports saying that Czech football star Nedvěd is serious about starting a football school in Shanghai. Other Czech related business is also receiving serious attention thanks to Zeman’s show up at the parade. For example, a post combining Zeman’s visit and an advertisement on Skoda received more than 100,000 click on Wechat, the most popular social network in China at this moment.

Apparently, the absence of other western leaders gave Zeman a golden opportunity to position himself under the spot light. Although Chinese media did not raise a fuss about the snubbing of the parade by Western leader, this big applause to Zeman and the Czech Republic can be regarded as a more sophisticated reaction to show what the absentees have missed. It might seem for example reasonable to expect more Czech beer to be found in Chinese department stores in the next few years thanks to the momentous hand-shake between Zeman and Xi.