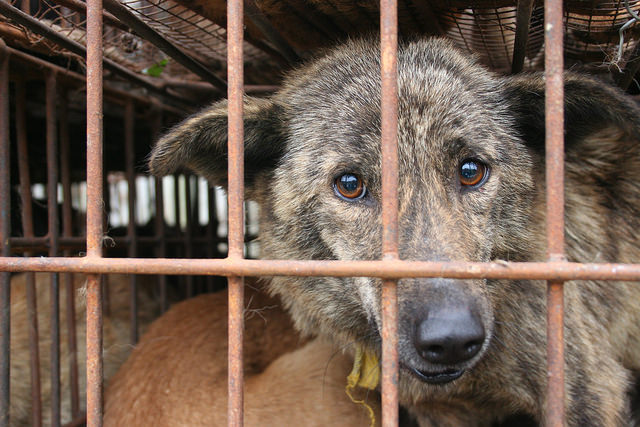 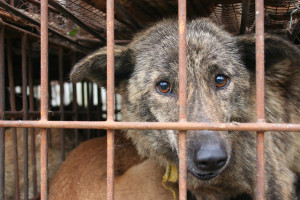 Chinese habits are different in many ways from those European. One of them is the still present and popular habit of eating dog meat. Dog meat festivals have been organized annually in China. Fortunately more and more people care about animal rights and campaigns against dog meat festivals are spread over the internet, contributing to the slow progress in the protection of animal rights in the country.

After a huge campaign in 2011, one of the biggest dog meat festivals, The Jinhua Hutou Dog Meat Festival, was cancelled. The local market was organized annually and the possibility of buying dog meat made it even more famous, eventually leading to the change of the name to “Dog Meat festival” to attract more visitors. A huge online campaign led by activists was supported by a lot of netizens. Eventually, the local officials decided to cancel the festival citing the obligation to respect the public opinion.

But there are still many people in favour of such festivals. They claim it is a part of the Chinese history and culture. According to the Jinhua Hutou Dog Meat festival tradition, dog meat was first eaten when Hu Dahai, rebel fighting against Yuan dynasty in 14th century, ordered to kill all dogs in the neighbourhood because their barking always announced the arrival of Hu´s army. Consequently, dog meat was eaten by his soldiers and it was the beginning of the tradition. Usually, the meat for festival was prepared at home by vendors and afterwards sold at the market. The rumour was spread about poisoning dogs and selling their meat, so vendors started killing, flaying and cooking dogs right at the market so the customers could see the meat was fresh.

Sadly, this is still reality for dogs who end up at the Yulin Dog Meat festival. According to the journalists this happens to more than 5000 dogs daily every year during festival.  As one blogger wrote „There are thousands of dog eaters gathering there. People slaughter dogs mercilessly, the blood of the dead dogs flows like a river, the horrible screams of dogs pierce the sky.” In the past years, there have been many activists protesting at the festival. But seems like nothing has changed. Last year, the organizers tried to prevent protesting so the festival was held week earlier, but protesters learnt about it and came anyway. Some of them even bought dogs in order to save them from their horrible destiny. It looks like this year the festival will be organized again. On the internet you can find various petitions and calls to tweet against it with #StopYuLin2015.

Dog meat is popular in China up to now also because of traditional Chinese medicine. It is believed that it has “heating” effect so it should be eaten in autumn and winter. In culinary terms, dog meat is usually blanched or soaked before cooking to dispel the earthier, heavier aspects of its flavour. It is then made into soups, roasted or served cold as an appetiser. The tender meat of puppies is more popular than that of older dogs.

Twenty years ago there were hardly any dogs in Beijing and if there were they probably ended up on a plate in a restaurant. Nowadays you can still find restaurants serving dog meat, but you are more likely to find dog-treat stores, dog web sites, dog social networks, a bring-your-dog bar, etc. In Beijing, there are more than one million registered dogs and large number of those unregistered.

In the past, during the imperial period dogs were popular pet among aristocracy such as Pekingese dog which was popular at the court. On the other hand, during Communist era dogs were more likely to be guards, herders or meals than companions. In general, pets in that time were considered bourgeois luxury.

Originally, people weren´t used to having dogs as pets. But slowly, thanks to the development of the economy and changes of life style, more and more people tend to have dogs as pets, especially in big cities. Some decide to get them as they help them release the stress, others compensate having only one child. The dog becomes a companion to their only child and when child grows up and moves away from home, parents still have someone to take care of. Dog is becoming a symbol of upwardly mobile Beijingers and people are willing to spend immense amounts of money for a preferred puppy. It is also a way how to meet people with the same interest. For dog lovers there has been a Pet Park opened not far from Beijing, a canine spa that includes a dog-and-owner restaurant, a dog agility course, a dog cemetery and chapel, a dog-owner motel or even bone-shaped swimming pools.

Yet, there are still lot of those who think that dogs are seriously disturbing the normal lives of other people and area nuisance. In order to protect citizens, the one dog policy has been introduced in 2006 in Beijing and in 2011 in Shanghai as there have been many attacks by unregistered dogs and rabies has been spread. If the family had more than one registered dog, they could keep them, but nowadays families can register only one dog. If there is an unregistered dog found, the destiny is obvious. In these cities, dogs above the height of 13,7 inches cannot be kept. Keeping of what they call „attack dogs“ has also been banned.

During recent years there have been some positive changes regarding animal rights in China. The knowledge about the importance of protecting animals has been spread mainly by voluntary groups. One of them is China Small Animal Protection Association. Thanks to this organization a lot of animals have been saved from being eaten. But up to now there still isn´t any law explicitly forbidding eating dog meat. Hopefully one day all citizens will understand the necessity to protect animals and eating dog meat will be prohibited.