Decoding Différance: Can Beijing push the Taliban towards a change?‎ 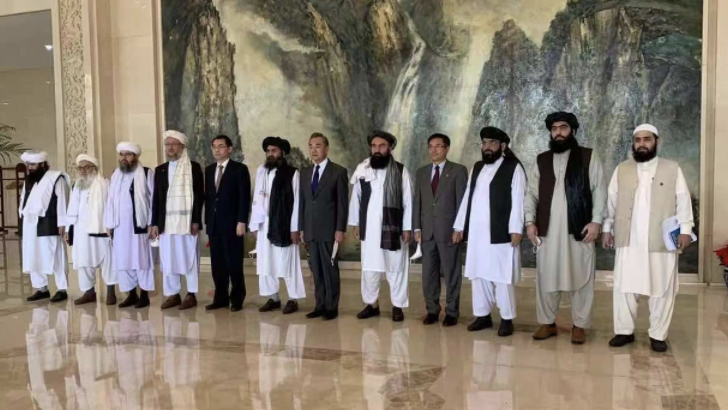 As the Taliban completes its takeover of Afghanistan, Beijing is likely to be one of the first players to recognize the impending Taliban government. But will the Chinese ticket to international recognition be enough to generate a real change within the Taliban? In fact, for China, the form often trumps the substance and as long as the Taliban can maintain plausible deniability via argument of internal factionalism and not being able to control every single of its members, the group can in theory get a pass.

One of the main pillars of Jacques Derrida’s philosophy is a concept of ‘différance’ that calls into question what really constitutes a change. He skillfully misspells the word to signalize the novelty while highlighting the difference between sensible and intelligible. With the Taliban, things are not much different. Over the past few days, it has become more than clear that the US commitment in Afghanistan has come to an end, and unless a major terrorist attack targeting the US interests emerges from inside Afghanistan, the Americans are not coming back. This suggests that the future of human rights and gender equality in Afghanistan but also wider international security now rest almost entirely with the Taliban and their ability to change and move away from the zealous fundamentalist organization that ruled the country back in the 1990s.

The question of whether the Taliban has been trying to establish itself as a more moderate organization is not new. Indeed various arguments have been put forward by analysts and academics in recent years often pointing towards the group’s changing rhetoric around women’s rights to education or, most recently, moderating influence of other regional players. In fact, these two are the two main points one should point to if they want to understand whether the Taliban is capable of moderation.

That the best predictor of future behavior is the past can be an overvalued argument, but not when the past is not that long ago. Despite the current media-savvy strategy of the Taliban which includes reassurances that women’s rights will be respected, the group actually has a little established pattern of doing so. One needs to look at the past two years (which include a period of peace negotiations) during which the Taliban not only targeted and murdered high-profile women such as journalists and potentially judges but during which the international press reports also documented how attacks on female education tend to increase in areas under the rising Taliban control. For instance, in 2019 two girls’ schools were set on fire by armed men on motorcycles with graffiti on a nearby wall saying ‘Long live Islamic Emirate’.

However, there is hope that the Taliban might slightly change its approach. And if it does, it is likely to do so in the name of power rather than moderating its ideology. The rapid military victory that the Taliban has achieved was undoubtedly a part of its strategic calculus. The group has had this in the making for years, strategically expanding its influence in rural areas so it is able to swiftly capture provincial capitals while at the same time attacking the North, an important power base for the government. This shows that the Taliban can think strategically – and most importantly – pragmatically. It has begun its offensive while still engaged in ‘peace talks’ with the US, showing the lengths the group can go to create tactical smokescreens to further its strategy.

What has been particularly pragmatic, however, is the group’s relationship with China. Time and time again since the 1990s, the group has suggested it will restrict foreign militants operating in its territory, most likely in exchange for economic support from Beijing. And, it is reasonable to say that China has often perceived economic investment as a way to stabilize troubled regions. Indeed, Beijing has managed to embed the Belt and Road Initiative (BRI) in the 2017 resolution by the UNSC calling for the strengthening of “the process of regional economic cooperation, including measures to facilitate regional connectivity, trade, and transit, including through regional development initiatives such as the Silk Road Economic Belt and the 21st-Century Maritime Silk Road (the Belt and Road) Initiative.”

However, what China is offering today is not only economic cooperation but international legitimacy and a ticket to a new geostrategic camp. It is not a coincidence that Beijing was among the first ones to suggest a friendly relationship with the Taliban. At the end of the day, China has for long carried out shuttle diplomacy as a part of the peace process. What is most important is that unlike back in the 1990s, China brings to the table a whole group of similarly-minded states that are likely to follow the suit and try to at least develop a friendly relationship with the Taliban if not outright recognize it.

While in recent weeks many enthusiast analysts suggested that Beijing will fill the vacuum left behind by the US, Chinese strategic culture suggests it is unlikely to do so. But what it will probably try to do is to push the Taliban to moderate its policy in theory while turning a blind eye to the real substance. As long as the words are pronounced, never mind what happens on the ground. This type of obsession with a ‘form’ rather than substance is seen across a plethora of controversies where China picks up a fight with foreign businesses and organizations for not using the correct language when it comes to issues around Taiwan, Xinjiang, or even COVID-19. This is because, for Beijing, form often trumps the substance and as long as the Taliban can maintain plausible deniability via argument of internal factionalism and not being able to control every single of its members, the group can in theory get a pass, This of course only as long as it controls Uyghur militancy within its borders.

One might argue that Beijing has been preparing for this long time; whether throughout the establishment of the Shanghai Cooperation Organisation, joint counter-terrorism training, or China-Afghanistan-Pakistan trilateral strategic dialogues. At the moment, Chinese strategic and PR push is becoming clear: over the past few days, the Chinese foreign ministry has not only called on the new regime in Afghanistan to crack down on terrorist groups including the East Turkestan Islamic Movement but also said it is willing to help strengthen the country’s counterterrorism capabilities. And even if Beijing does not recognize the Taliban as a legitimate government, its willingness to cooperate with the group would probably be a major obstacle in case of a wider international push to sanction the potential Taliban regime for human rights violations.

So what would constitute the real change? The ideology and its enforcement are tricky things to delineate and leaving the former behind is a difficult and complex process. The Taliban becoming a rational power-seeking actor is probably the closest to the real change one can get, particularly on such a short timeline and without any real moderating presence in the country. The latter becomes obvious when one thinks of Islamic State Khorasan which started to grow stronger in Afghanistan because many militants in the country found the Taliban too moderate. Inevitably, this type of influence within its borders begs the question of whether the real focus should be on whether the Taliban is able to change its surrounding environment rather than just changing itself.