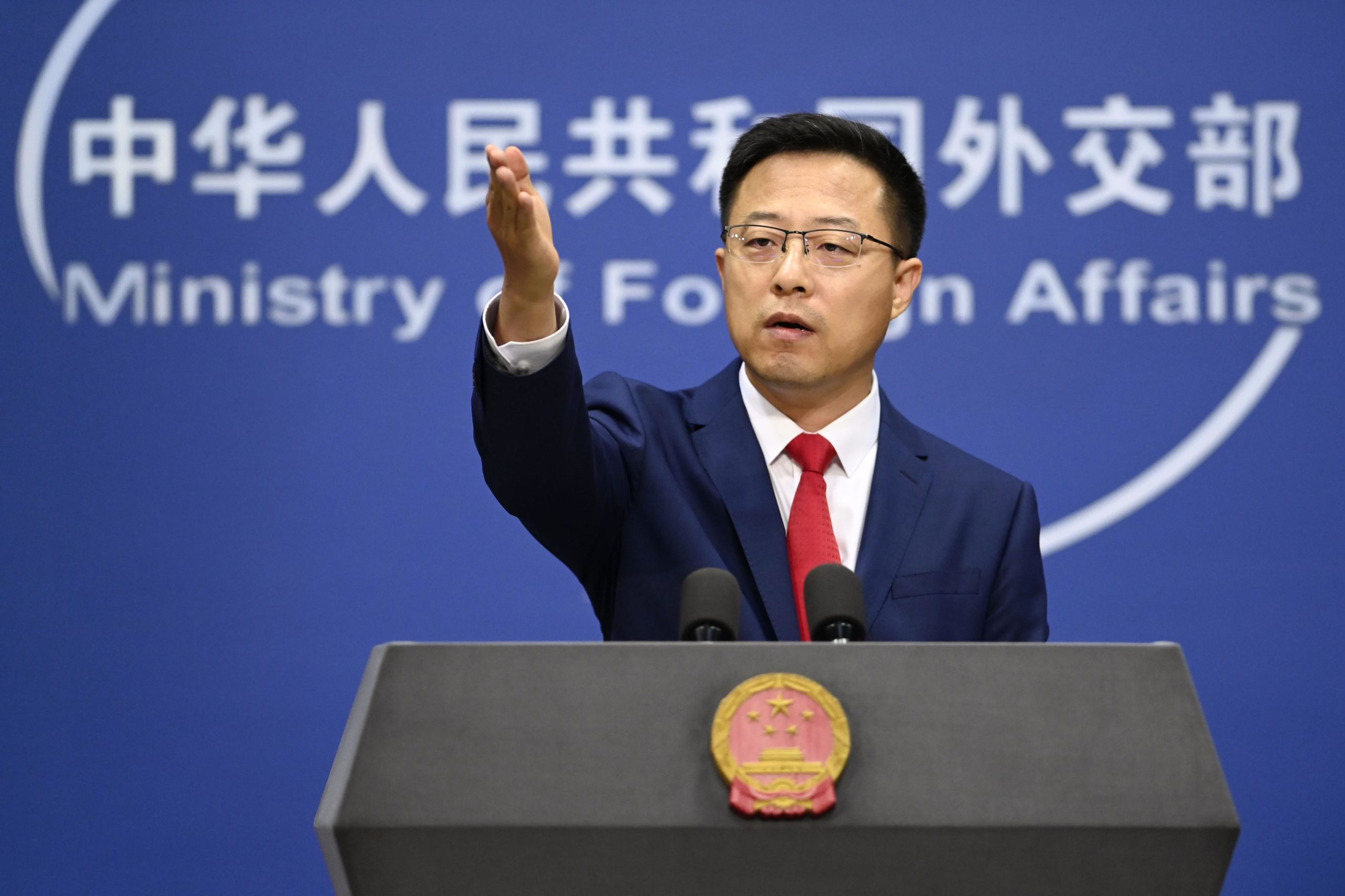 China’s foreign policy discourse towards the US became slightly more positive in 2021 – the first time in six years. This is one of the main findings of the update of our Chinese MFA press conferences dataset that covers now the 2002-2021 period.  The dataset is freely available via the Harvard Dataverse repository and was previously introduced in an article published by the Journal of Chinese Political Science.

Main findings from 2021: Signs of the stabilization in US-China relations?

The sentiment analysis of all references to the US in the Chinese MFA press conferences reveals a noticeable improvement in the overall Chinese sentiment concerning the US for the first time in six years in 2021 (Figure 1). Previously, since Xi Jinping took office in 2012, the sentiment of the Chinese MFA’s US discourse was getting more negative, and especially escalating and reaching historic lows during the Trump administration. The improvement in 2021 – while by no means dramatic – can be interpreted as a sign of limited stabilization during the Biden administration. Although President Biden has continued to treat China as the “most serious competitor” of the US, the relationship did seem somewhat more stabilized, perhaps thanks to the more ‘diplomatic’ language and approach used by the Biden administration compared to the Trump presidency. 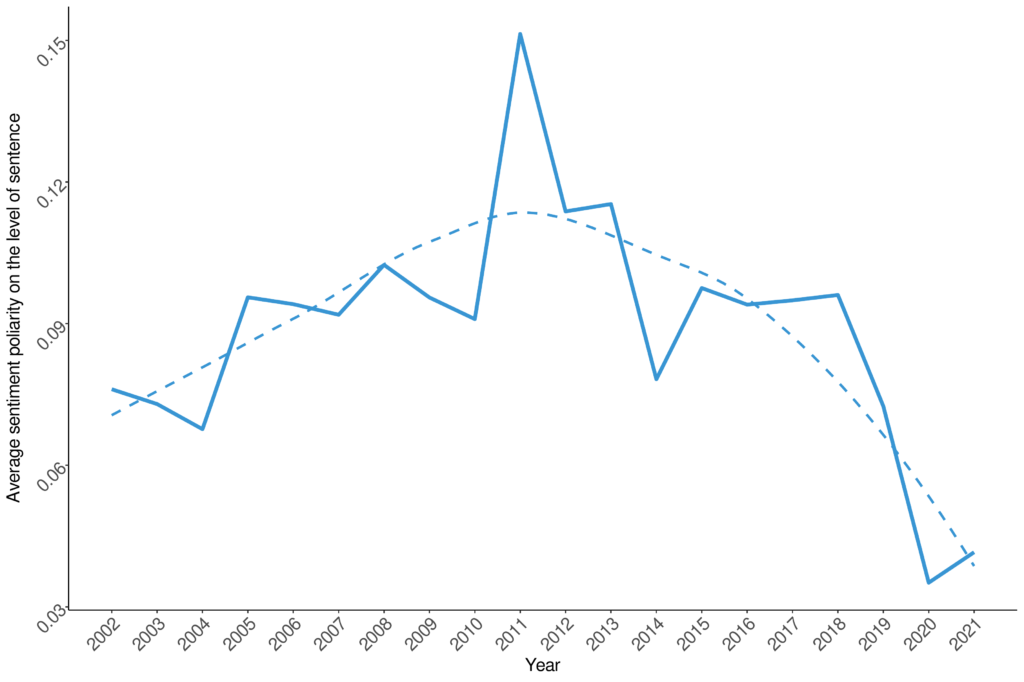 From the perspective of the topics being discussed in 2021, we can notice the still dominant role of the US within the semantic map of the Chinese diplomatic discourse, which appears to act as an anti-pole to Chinese interests (Figure 2). The position of the US close to the issues such as Xinjiang, Hong Kong, and Taiwan reflects upon the Chinese government’s view that the US government uses these issues to attack and undermine China. In comparison, from 2002 to 2012, Chinese overall diplomatic discourse was dominated by topics of cooperation and development, and the Six-Party Talks, with the former being very close in the semantic map to China and the latter much further (see online Figure A). Subsequently, from 2012 to 2020, the discourse became more comprehensive (see online Figure B). While the topics related to ‘cooperation’ remained on the top of the agenda and semantically close to China, a host of other issues became more visible, including Taiwan, Hong Kong, Xinjiang, and Covid. 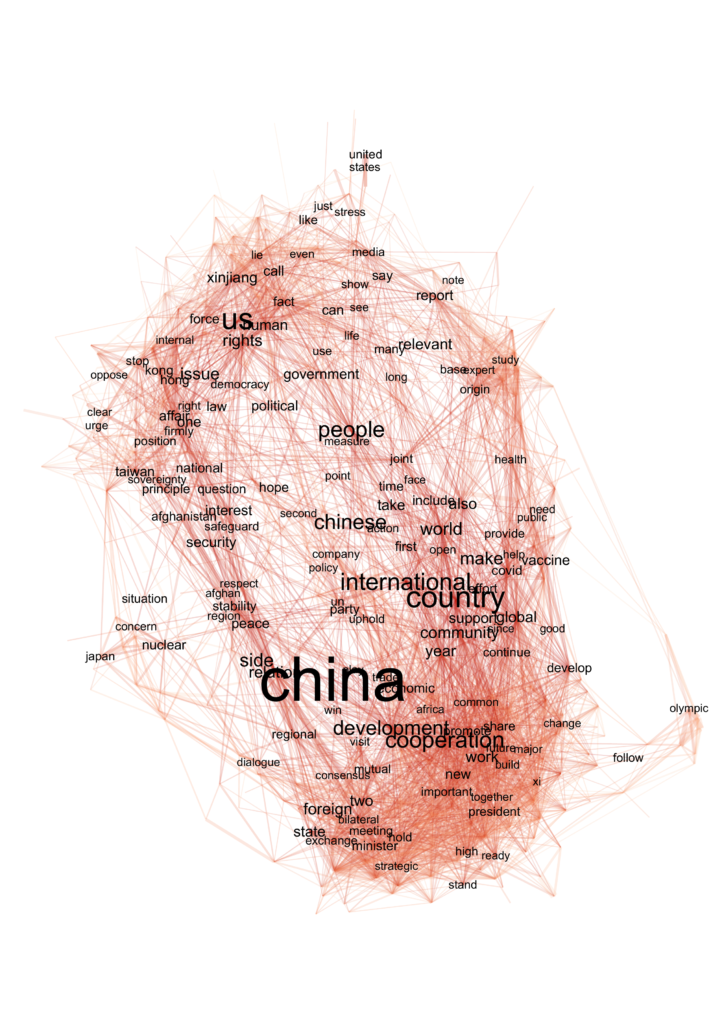 Note: The graph summarizes China’s overall foreign policy discourse in 2021. It is based on a statistical model that places frequently co-occurring words closer to each other in the network layout. It creates “clusters” of words visualizing prevailing topics and policy issues. The size of the words (i.e. nodes) depicts their overall prominence in the corpus. Only top words are visualized in the graph. For a more detailed description see the original paper introducing the dataset.

Overall, the Chinese Ministry of Foreign Affairs (MFA) remained very active in 2021 in terms of its regular press conferences (Figure 3; Figure 4). The number of their regular press conferences, and questions posed and answered, stay at a similar level as in previous years, reaching historical heights since 2002. This also confirms the trend since current leader Xi Jinping took office in 2012, which saw the growing activity of the Chinese MFA.

Figure 3.  The average number of press conferences per week 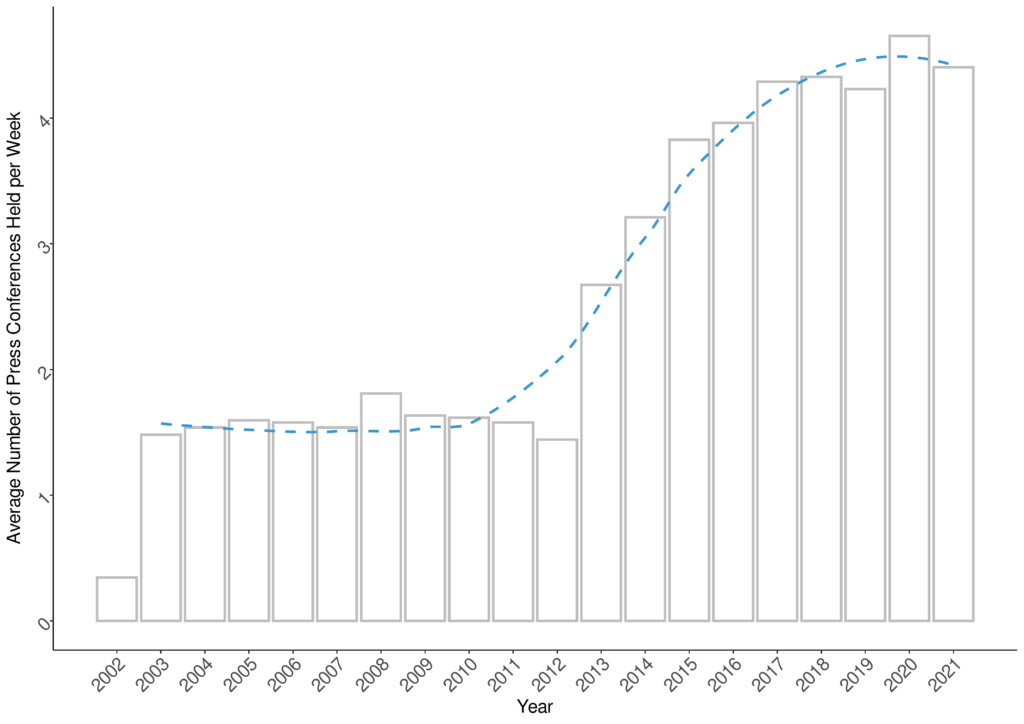 Figure 4. The average number of recorded question/answers per week 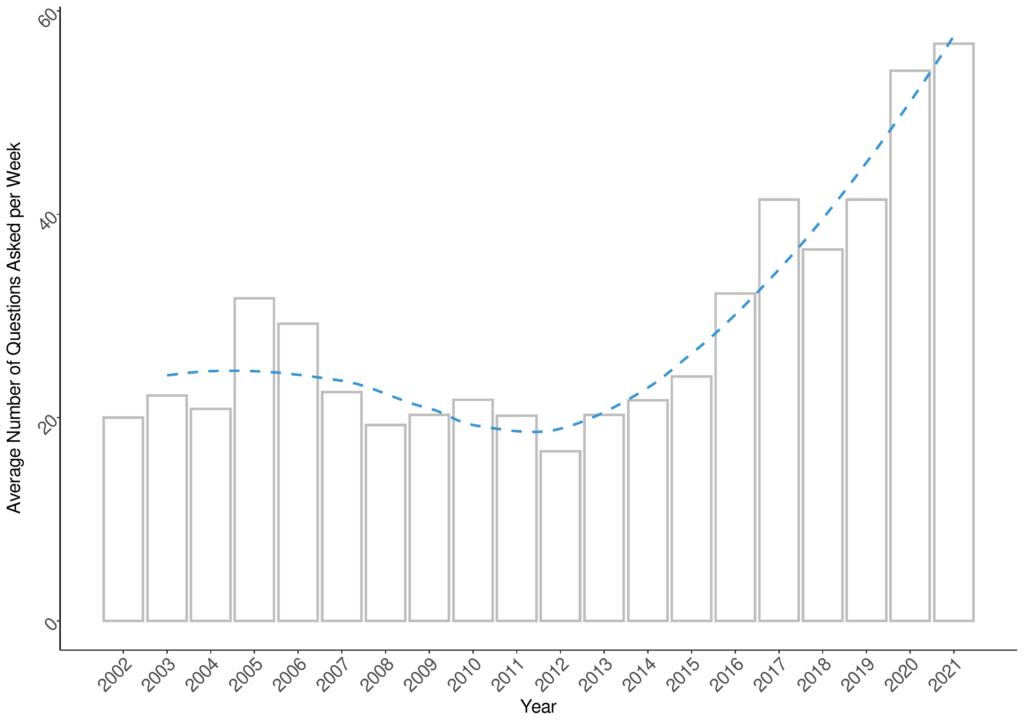 Apart from adding new data, we have implemented minor fixes considering splits of multitopical questions in the updated dataset by developing a better algorithm for identifying multitopical candidates. Seventy-four questions were re-checked manually from version 1, and 43 were split into multitopical questions. All question/answer dyads from 2021 were processed with the new algorithm. Moreover, all questions/answers dyads (raw text) were processed again using more advanced Natural Language Processing (NLP) models. For version 2, we used Trankit pipeline instead of UDPipe. Trankit has improved the precision of lemmatization as well as provided a more straightforward way of extracting named entities (NER).