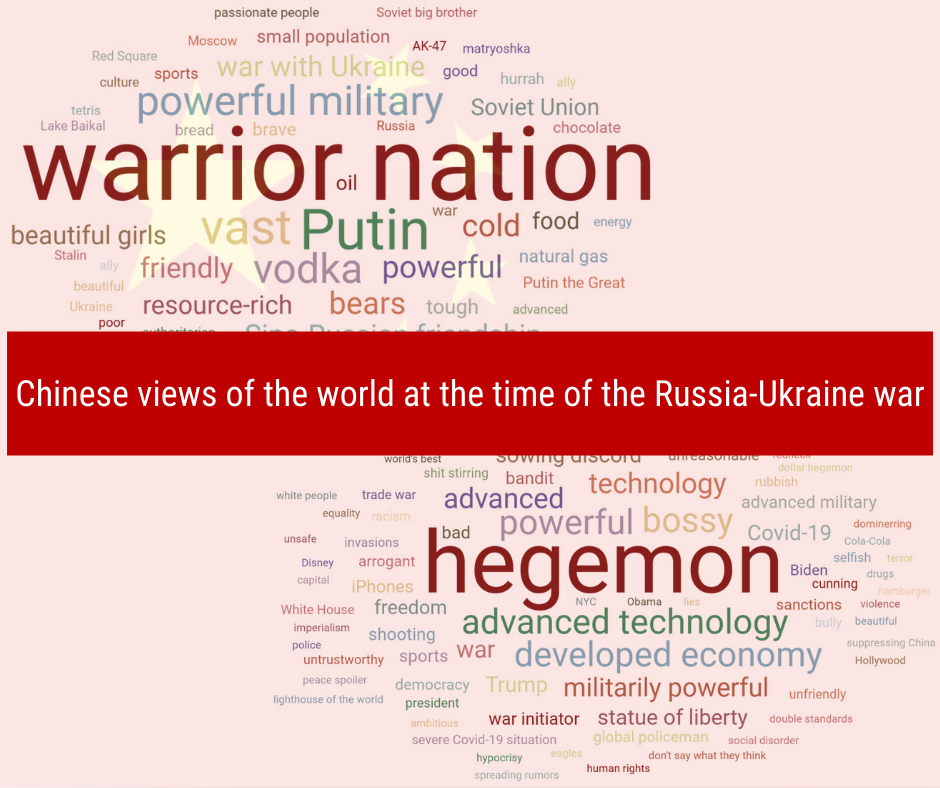 The perception of Russia among Chinese citizens has markedly improved over the past three years, despite Russia’s aggression against Ukraine. Russia is now the country Chinese feel most positively about, according to our “Chinese views of the world at the time of the Russia-Ukraine war” survey report.

“This is a unique survey which gives broad and detailed insights into Chinese people’s attitudes at a crucial time in international relations, just after the Russian invasion of Ukraine,” said Dr Richard Q. Turcsányi, Key Researcher at Palacky University Olomouc and Program Director at CEIAS, who has led the team. “Our findings show that the Chinese public was not disturbed by the Russian moves and actually seems to support Russia in the war,” Turcsányi added.

An international group of researchers led by Palacky University Olomouc, Czech Republic, conducted an online survey of more than 3 000 Chinese respondents in March 2022. Published in cooperation with the Central European Institute of Asian Studies (CEIAS), the report presents the results, especially in relation to Chinese attitudes towards Russia, the US, and international affairs. The findings show that the Chinese public largely supports Russia in its war in Ukraine, while views about the US have significantly worsened.

Of the 25 countries respondents were asked about, Russia was the most positively perceived country, while the US was the most negatively perceived. The United States was commonly thought of as an advanced and powerful state, yet hostile to China, untrustworthy, and having a tendency to interfere in other countries’ affairs. In contrast, Russia is clearly viewed as a friendly country, but without deep social roots and driven by a pragmatic recognition of the exigencies of state-to-state relations, along with the persona of the current Russian leader, who is regarded positively as a strong ruler.

“Bilateral relationships are an important factor driving the attitudes of the Chinese toward foreign countries. Chinese domestic propaganda seems to be working,” Turcsányi said.

In particular, Chinese people’s attitudes towards Russia and the US are spilling over from matters of government policy into broader societal issues and expectations. Chinese respondents consider Russia to be the sole great power standing with China, while the foreign policies of the US, European Union, Japan, and India are seen negatively.

At the same time, “the tense diplomatic relations have not significantly damaged the Chinese public’s admiration for American culture, and a majority of Chinese still considered the US culturally attractive. We are not in a full-fledged Cold War yet,” said Tao Wang, Research Associate at Manchester China Institute and co-author of the report.

The survey also asked about confidence in Covid-19 vaccines produced in various countries.

“While some scientists argue that deploying Western vaccines is the key to China’s exit from the pandemic, our findings forebode that Beijing may have a long way to go. A striking 55% of Chinese respondents would be unwilling to receive US-made Covid vaccines, and 49% would be reluctant to be immunized with European vaccines. The Chinese public’s skepticism about Western vaccines is incredibly widespread and can be a real challenge down the road,” Wang explains the main findings.

This survey is part of a broader research project ‘Sinophone Borderlands – Interaction at the Edges’, funded by the European Regional Development Fund (CZ.02.1.01/0.0/0.0/16_019/0000791) and hosted by Palacky University Olomouc. As part of this project, a series of public opinion surveys have been conducted in various parts of the world.