The clock is ticking for success at G20 Hangzhou summit 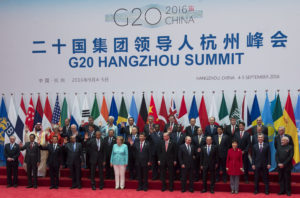 This article written by Richard Q. Turcsanyi was published at China.org.cn. See full text below.

In a few days, China will host one of its most important diplomatic events in recent years, the G20 leader’s summit, taking place on September 4-5 in the beautiful city of Hangzhou. It is no surprise that China was chosen to be this year’s G20 president country back in 2014. China has unquestionably become a major great power. It has contributed the largest share to the global growth in recent years and has become the second largest economy in the world (first when measured by purchasing power). The world wants China to be a prosperous country and to participate with the fair share in global governance and G20 is an important venue to work towards these goals.

China has always regarded G20 as the crucial global platform and the suitable place for providing for the world economic governance. In a way, G20 can be seen as the economic counterpart to the UN, which is taking care of the world’s security, but has proven lack of capacity for economic leadership. On the other hand, G20 is clearly a more appropriate body to deal with the world’s economic issues than the G7/G8 format, grouping only the developed countries. China appreciates the fact that within G20 it is put on equal footing as other great powers and developed countries.

University of Toronto professor and leading expert on G20 John Kirton recently published a book titled ‚China’s G20 Leadership‘ in which he claims that China has provided a necessary support within the G20 as one of the global leaders in tackling many of the world’s pressing issues. He was certainly not alone in having high expectations of China when it became the president of the group. Chinese leaders themselves elevated the prospects by announcing very ambitious goals for its presidency.

However, with the time going, the question marks about the success of China’s G20 year starts to pop up. The progress is well seen from the developing Kirton’s commentaries throughout the year. The initial event of China’s G20 year in Shanghai in February was labeled as a ‚slow start,‘ while the Financial Ministers meeting in Chengdu in July went down as a ‚disappointing response to global dangers.‘ Over at Lowy Institute’s G20 monitor, Yu Ye was somewhat more optimistic in her assessments, but she too found the Chinese experience to realize the ‚limitations of the leadership role.‘

As it seems, as of August 21, there is no abundant information pointing towards a major success being cooked for the Hangzhou summit. This obviously does not prevent an option that a breakthrough would occur – but it does suggest that it would require more performance than has been the case so far.

Sure enough, China is trying its best to prepare a truly wonderful event. The international audience must be astonished to hear that China put together a million volunteers helping to keep things in order during the summit. China is definitively interested to show itself in front of the world in the best light.

But there are pressing issues. The Chinese economy is slowing down and more and more expert voices can be heard asserting that worrying indicators are present, requiring deepening reforms and a restructuring of the economy. Still, no Chinese-initiated crisis has started during its presidency – clearly an assuring thing for both the Chinese and international observers. There are also various geopolitical and security issues which many G20 countries would be keen to discuss, but China is even more eager to prevent from being raised. An obvious number one among them is the South China Sea, especially after the recent ruling by the Permanent Arbitration Court in The Hague.

Therefore, in addition to keeping the summit secure and without any disturbance, China will definitely try to have its economy in the best shape and keep the agenda free of the sticky topics.

However, not to lose face must not be the main goal of the summit. In fact, some might worry that Chinese preoccupation with the face could prevent it from going boldly into some of the most important (and also difficult) issues.

It should be stressed and repeated, that there are indeed high expectations for the G20 to act and not only provide analyses. To name but a few, climate change is a major issue on which progress must be made sooner rather than later. The international financial system is also ready for a face-lift and the development goals are as pressing a question as ever before. And all this is happening in a very dynamic environment with major technological advancements, but also shocks such as the forthcoming Brexit.

In fact, many of these are issues which Chinese statesmen identified as Chinese priorities under the 4Is scheme – innovative, invigorated, interconnected and inclusive world economy – contributed by the fifth I – strong implementation of the commitments. It is therefore a positive sign that China has scored relatively well in this year’s compliance with the commitments taken in previous years – on average China complied with 75 percent of them, above the average from G20 members and also its own average from previous years.

The world will be watching Hangzhou in the beginning of September and it will not be enough if the summit will go down ‚just well,‘ without any embarrassment. The G20 must act. For that reason, it is hope of many that the world leaders, with China as this year’s president, will take the risk, be bold and make the step in the right direction – instead of being afraid of failure and prolonging the hard choices.

President Xi said at last year G20’s Antalya summit, that „instead of talking the talk, we must walk the walk.“ His message was clear – G20 is not only a body for discussion or study. This is the place where many of the world’s problems can and should be solved. The Hangzhou G20 summit is one of the best chances for China in a few years to provide the leadership in global governance and we all hope for best outcomes.