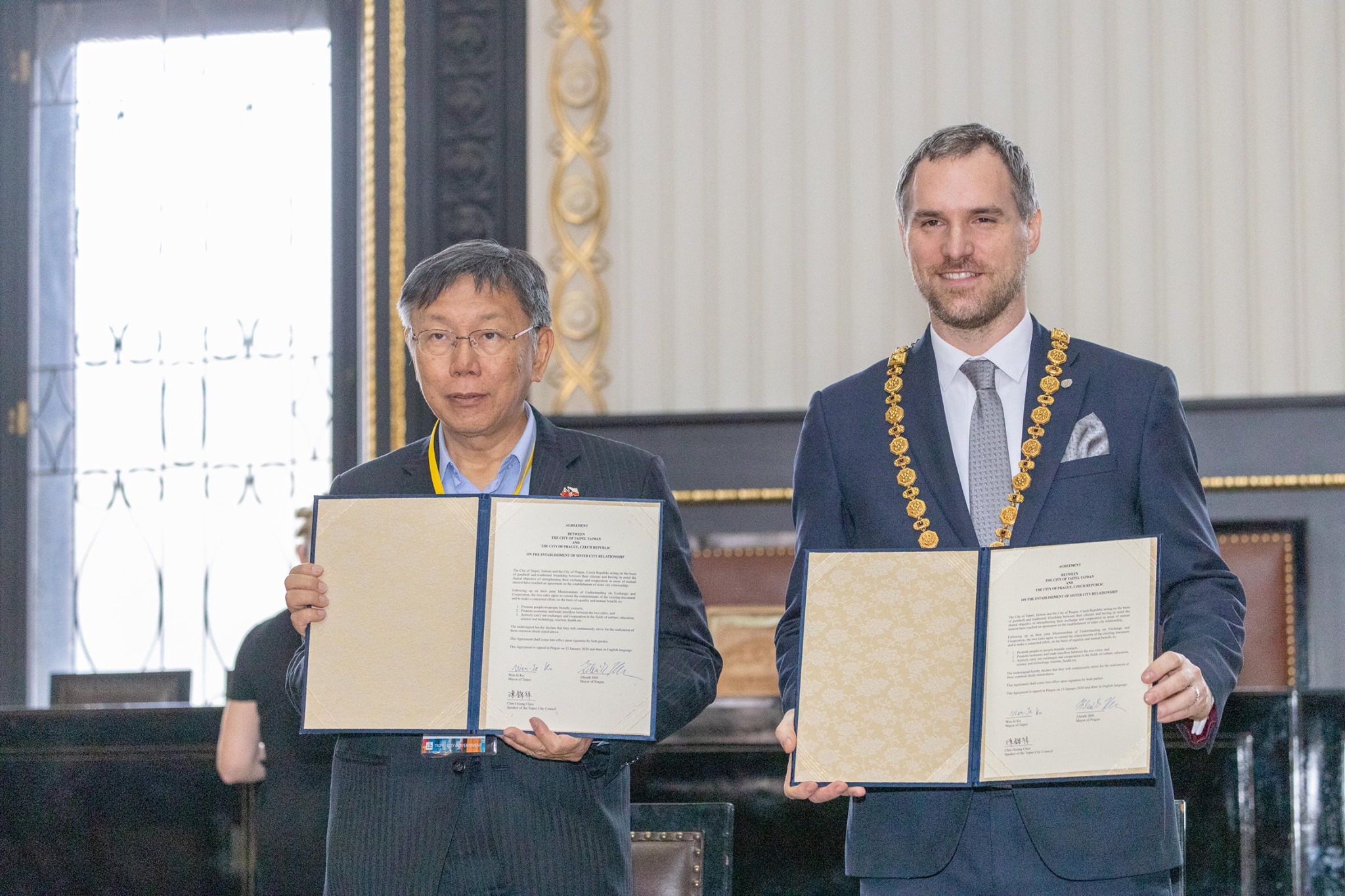 Shanghai’s cancellation of its partnership with Prague reveals how normally apolitical relations are increasingly tainted by identity politics.

When the Prague City Council approved a sister city agreement with Taiwan in January 2020, Shanghai responded by canceling its own partnership with Prague, which was established back in 2017. The cancellation came after a similar agreement with Beijing fell through a few months earlier over the “One China” issue.

In 2016, a month before a state visit to the Czech Republic by Chinese leader Xi Jinping, then-mayor of Prague Adriana Krnáčová approved a sister-city agreement with Beijing. This agreement in itself wouldn’t prove to be an issue until the city’s administration changed and a new mayor, Zdeněk Hřib, decided to review the agreement’s extensive “One China” policy clause. The clause holds that: “The City of Prague confirms its continuous commitment to the One China Policy of the Government of the Czech Republic, and acknowledges that Taiwan is an inalienable part of Chinese territory.”

After the new city council of Prague approached Beijing about removing this clause (supposedly multiple times, despite the fact that it was reportedly Krnáčová’s administration and not Beijing who proposed the clause in the first place) and received no satisfactory answers, it pushed for the whole relationship to be rejected. The city council’s reasoning was that by including the “One China” clause, the deal became political, which is not standard practice for sister-city agreements. Even though the decision to repeal the agreement passed the city council on October 7, 2019, Prague wasn’t able to implement it, as Beijing prematurely ended this agreement itself on October 9. As a result, Prague lost the last remaining hope of receiving a panda for the Prague Zoo — one of the more symbolic results of the two cities’ fallout.

However, Prague was quick to find a replacement for the panda promised by Beijing. In early December 2019, Prague formalized its long functioning relationship with Taipei into an official sister-city relationship. This was sealed on January 13, 2020, during a visit by Taipei mayor Ko Wen-je to Prague. As a symbol of the deal, Taiwan promised to gift several pangolins to the Prague Zoo.

Only a day later, Shanghai decided to sever its sister-city ties with Prague as a reaction. On this occasion, the Shanghai municipal government stated that “The administration of the city of Prague of the Czech Republic has repeatedly made wrongful moves on the Taiwan question… The Shanghai Municipal People’s Government and its people express our strong condemnation and solemn protest.”

The reasoning provided by Shanghai touches upon China’s “core interests,” which serve as primary motivators of China’s behavior as well as red lines, the crossing of which China tends not to tolerate. These “core interests” can be grouped into three main categories – the Chinese Communist Party (CCP) regime survival, sovereignty and territorial integrity (both physical and symbolic), and socioeconomic development. The “core interests” narrative is reinforced by creating and sustaining national myths, which serve to foster the domestic legitimacy of the CCP as a protector of Chinese peoples’ interests. Taiwan has been repeatedly marked a “core interest” of mainland China.

Thus, it would be a logical conclusion to presume that China would not tolerate the conclusion of any sister-city agreements with Taipei and other Taiwanese cities. However, further analysis of Shanghai’s response reveals its unconventionality. The incident speaks to the deeper nature of how sister-city ties can be used and abused in modern power and identity politics.

The Curious Case of Prague and Shanghai

Upon examining the list of partnership agreements concluded with the four largest Taiwanese cities (Taipei, Kaohsiung, Taichung, and Tainan), we found at least 71 pairs in which the non-Taiwanese city has sister-city relations with a mainland Chinese municipality as well. Of these, 12 cities established ties with a Taiwanese partner after having established a partnership with a mainland city, a structure similar to the Shanghai-Prague-Taipei love-hate triangle. The 12 cities include partnerships like Qingdao-Miami-Kaohsiung, Harbin-Warsaw-Taipei, Fuzhou-Tacoma-Taichung, or Shenzhen-Brisbane-Kaohsiung. In the reverse (i.e. cases in which the partnership with a Taiwanese city was concluded prior to the one with a Chinese city) we can find high-profile pairings like Taipei-San Francisco-Shanghai or Taipei-Riga-Beijing.

What differentiates the Shanghai-Prague-Taipei partnership from the rest is the fact that this is the first and so far only case since Xi Jinping’s accession to the CCP chairmanship when a city partnered with a mainland Chinese city has decided to conclude a partnership with a high-profile Taiwanese counterpart. Prior to Xi’s accession to power, the practice was not uncommon. While this may suggest a change in attitude on part of CCP, however, there have actually been at least 15 instances of mainland Chinese towns establishing partnerships with cities already in a relationship with one of the four Taiwanese cities.

This leads us to believe that the conclusion of a sister-city agreement with Taipei was not the make-or-break factor for Shanghai. Instead, other factors were more influential in the decision to cancel the agreement with Prague.

However, there are several examples of sister-city agreements being politicized, which later lead to their dissolution. The most well-known is probably the case of Osaka and San Francisco. After 60 years of sister-city relations, Osaka decided to cut off this relationship in October 2018, after a statue honoring the “comfort women” was built in San Francisco.  “Comfort women” is a euphemism for non-Japanese women who were forced into sexual slavery in Japanese military brothels during World War II. Raising this issue is often seen as a challenge to the post-war pacifist identity of the Japanese people, which explains the usually fierce response of Japanese officials to any criticism. After repeated attempts from the Japanese side to have this statue removed, Osaka’s mayor decided to terminate its sister city relationship with San Francisco.

Another example is the Istanbul-Rotterdam partnership. The two cities had a sister city relationship from 2005 until 2017, when it was terminated by the Turkish side. The termination followed the banning of Turkish ministers from holding rallies for diaspora communities in Rotterdam before a controversial Turkish referendum on constitutional amendments. Turkish President Erdogan was actively involved in the decision, as he reportedly asked his prime minister to tell the Istanbul mayor to end the relationship with Rotterdam.

Similarly and more recently, several Swedish municipalities and counties severed their ties with Chinese partners, including the partnership between Borlänge county and Wuhan city, over the Chinese embassy’s increasing pressure on Swedish journalists in the aftermath of Swedish PEN giving the Tucholsky award to Gui Minhai, a critic of the CCP regime, in the fall of 2019.

Comparing the Shanghai-Prague relationship with the Borlänge-Wuhan, San Francisco-Osaka, or Rotterdam-Istanbul cases, we can see that all have something in common: politicizing the supposedly apolitical sister-city relationships. Not only that, but the issues that resulted in terminating these sister-city agreements were deeply important to the nationalist myths promoted by the respective countries’ governments — be it the Japanese response to the “comfort women” issue, the way in which the Turkish government is attempting to tie the diaspora closer to its own goals, or China’s response to criticism of its track record on human rights.

The Prague-Shanghai agreement has been canceled in a similar atmosphere of politicization when nationalist sentiments were put at the forefront of the otherwise apolitical relationship. As the numbers clearly show, the very fact that Prague concluded an agreement with Taipei was not a hot enough issue to warrant cancellation of the sister-city agreement with Shanghai.

What was a much more influential factor in reaching this conclusion was probably the context in which the agreement with Taipei was concluded. The attempted renegotiation and subsequent cancellation of the Prague-Beijing agreement had already fostered a heavily politicized environment of mutual mistrust. This was further exacerbated by the fact that Prague representatives and the Czech society as such were using the termination of the agreement with Beijing to reinforce their own identity based on the legacy of Václav Havel, a rejection of communism, and respect for human rights. In such context, any action that might even slightly challenge China’s version of reality would be misconstrued in China as a threat to its core interests, thus challenging the nationalist myths on which the CCP’s domestic legitimacy is built.

Matej Šimalčík is the executive director of CEIAS.

Adam Kalivoda is a research assistant at CEIAS and a BA student of Philosophy, Politics, and Economics at the University of Warwick.

The article was originally published by The Diplomat.