South Koreans Have the World’s Most Negative Views of China. Why?

Home Publikácie CEIAS Insights SK South Koreans Have the World’s Most Negative Views of China. Why? 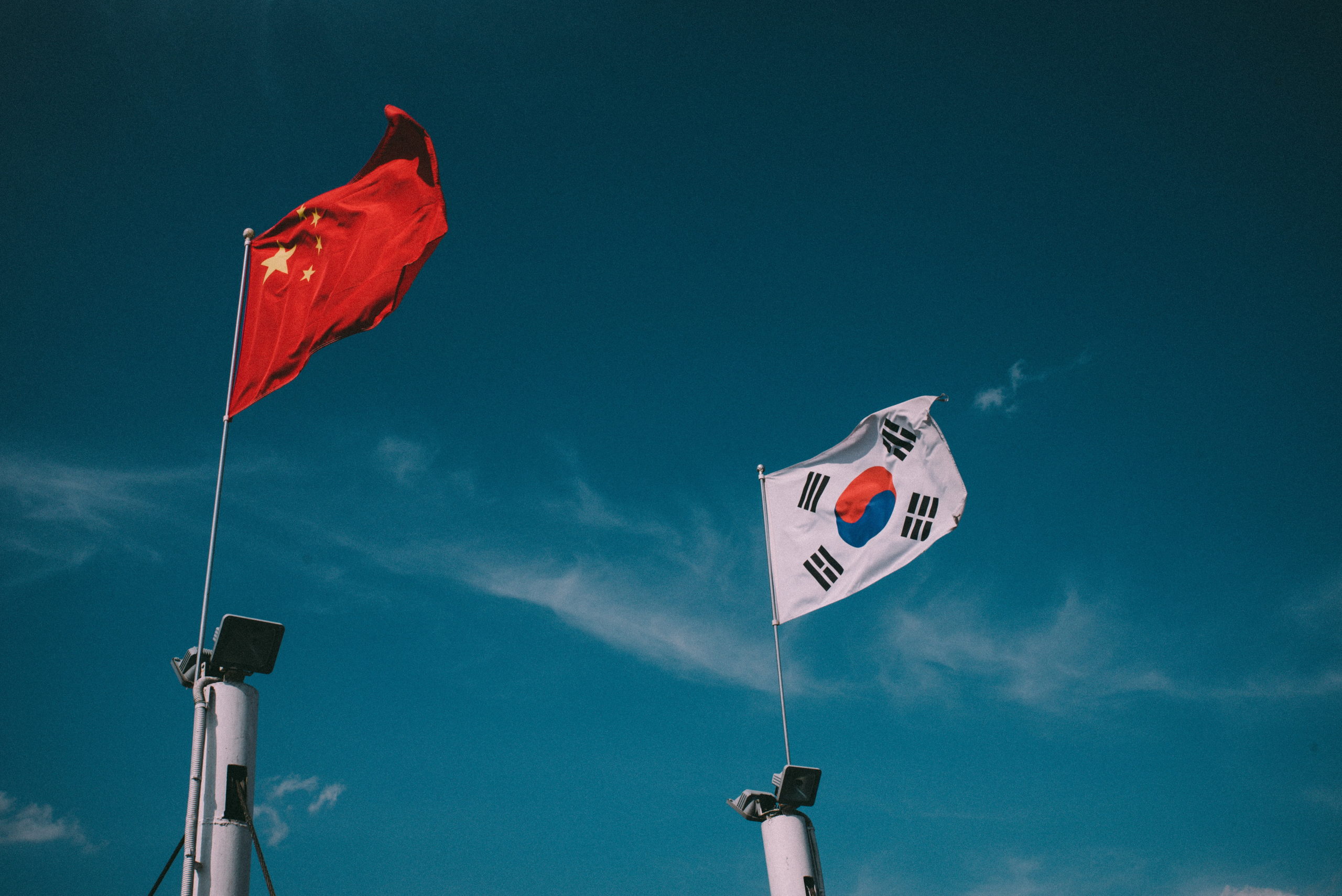 The explanation goes well beyond the oft-mentioned THAAD dispute.

When asked about general views of China, 81 percent of South Korean respondents expressed negative or very negative sentiments. That is (substantially) more than in any of the 56 countries surveyed worldwide as part of the Sinophone Borderlands project. What makes South Koreans so negative about China? And what are the foreign policy implications?

South Korea used to be known for its balancing act between its ally and security guarantor, the United States, and its leading economic partner and increasingly dominant neighbor, China. In the past, this was also visible at the public opinion level. According to Pew Research, in 2015, South Koreans were relatively positive about China, when only 37 percent of them held unfavorable views.

However, Korean attitudes toward China turned sharply negative over subsequent years. This is usually explained as a result of the tensions in bilateral relations surrounding the deployment of the U.S. anti-ballistic missile system THAAD, which was announced in 2016.

Our survey confirms the negative views of China among South Koreans, but also gives plenty of new empirical insights (both in South Korea and elsewhere), which help us explain what makes South Koreans so uniquely negative about China.

To appreciate just how negative South Koreans are toward China, there is a whopping 10-point gap in negative views between South Korean and the second-most-negative country, Switzerland, (with 72 percent of respondents holding negative perceptions), as well as third-place Japan (with 69 percent). South Koreans also have (by far) the lowest average sentiment toward China measured on a scale of 1 (most negative) and 100 (most positive). With a mean score of 25.5, Koreans are substantially more negative toward China than respondents in Switzerland, Sweden, Japan, Canada, France, and Germany, whose means are between 32-35 . 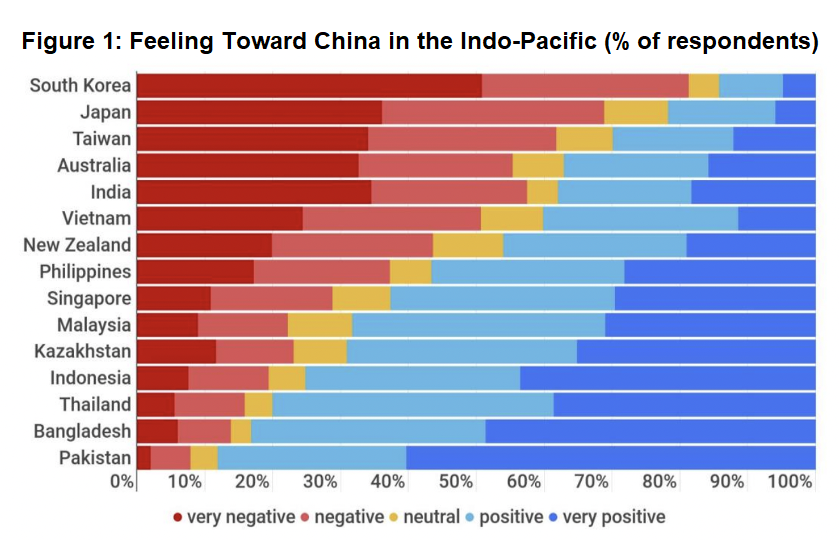 Structure of Korean Attitudes Toward China

What makes South Korean attitudes toward China different is not just overall negativity but also the structure of the views.

Interestingly, when asked about various aspects of China, the most negative one in South Korean public opinion is “China’s impact on the global natural environment” (the magazine SisaIn in 2021 arrived at a similar finding in their survey). In most other countries, the most negatively perceived aspect of China tends to be “China’s military power.” This goes against the assumption that as China’s immediate neighbor, South Korea would be more sensitive about China’s military as a potential threat to its national security. In reality, although Koreans are indeed very negative about China’s military, they are even more so about China’s impact on the global natural environment. 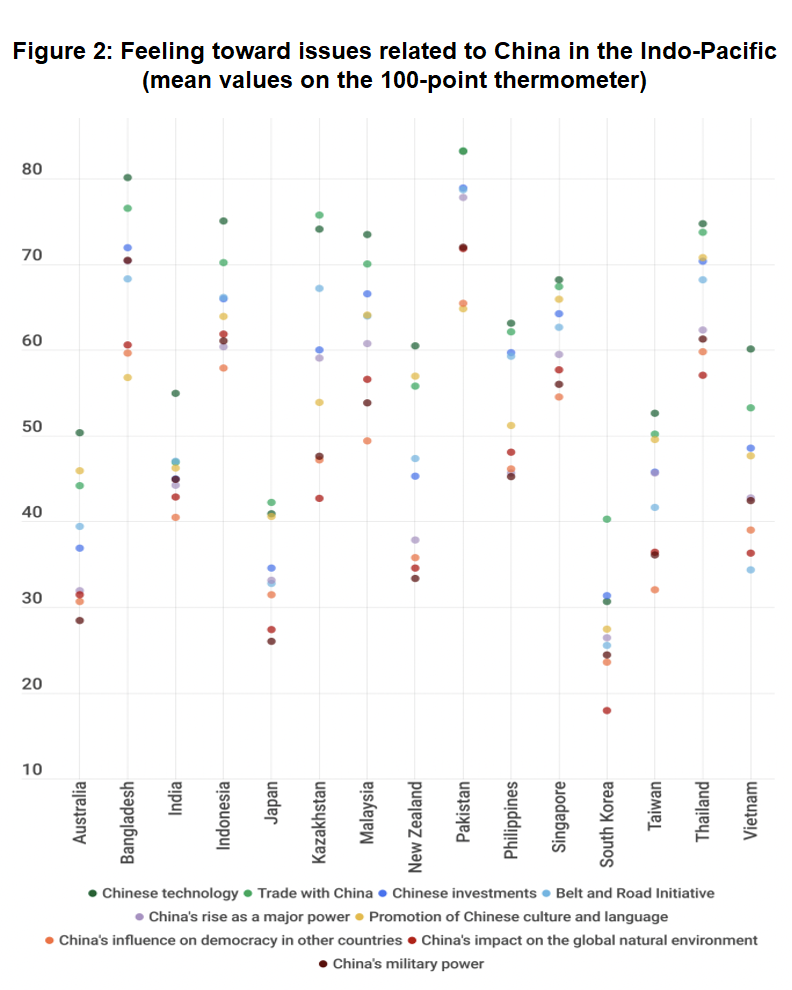 Finally, we also asked about how Chinese people (from the PRC) are viewed – and here, again, the South Koreans differ from respondents in other countries. In most countries, including in Europe and North America, Chinese people are seen predominantly in a positive light; respondents make a distinction between the country (China) and the people.

In South Korea, however, the Chinese are seen almost as negatively as China, with 77 percent of respondents having negative or very negative views. This may be regarded as pointing toward a deeply negative perception of anything related to China, with little to no differentiating between the people and the country.

The Role of COVID-19

Another issue that seems to drive South Korean views of China is COVID-19. In fact, COVID-19 is the most commonly held first association of China among our respondents, followed by communism. What is noteworthy is that among the commonly held associations, those with negative sentiments clearly dominate, and one is hard-pressed to identify any positive-sounding one.

The role of the coronavirus in driving Korean views of China is confirmed by regression analysis, which reveals that perception of how China has handled the coronavirus pandemic, and assessments of its vaccines (both seen very negatively in South Korea), are strong predictors of the general attitudes toward China.

Another interesting point that could be gleaned from the word cloud is that words directly related to the THAAD dispute were not mentioned. The THAAD dispute has often been cited as the cause of a turning point in public attitudes toward China in South Korea, leading to the sharp increase in negative sentiment after 2016. However – besides COVID-19 – general perceptions, such as communism and large populations, were common associations instead.

Also, references to “history distortion” show up, reflecting the lasting effects of public outcry over the hanbok issue evoked during the Beijing Olympics this year. Other common themes point to other negative features associated with China in South Korea: “dirty,” “counterfeits,” or “selfish.” 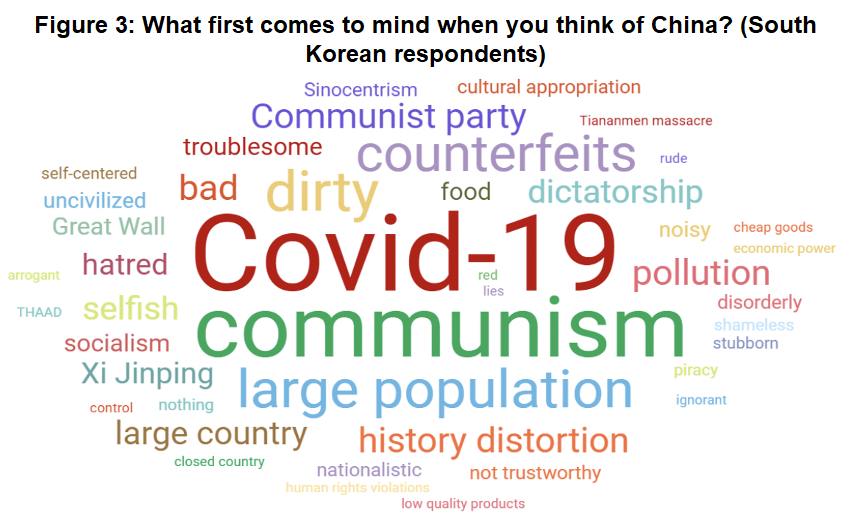 Looking at the socio-demographic and other divisions that could tell us more about the driving forces of Korean attitudes, it can be suggested that there is no big polarization – or even diversity – when it comes to perception of China in South Korea. There are only small differences between Koreans of different genders, ages, regions, or political preferences.

However, the general expectation that social contact improves views is confirmed. Those Korean respondents who have interacted more often with the Chinese people (those from the PRC) – and those who have visited China – tend to be more positive about China than those who interact less and haven’t been to China.

One interesting finding is that Koreans who are more satisfied with their economic well-being and the economic situation in the country tend to be more positive toward China. This can be interpreted to mean that those of lower socioeconomic standing feel more threatened by China (perhaps due to its competition), while those of higher standing may see China more as an opportunity (such as in economic terms). Findings from other countries in East Asia (such as Singapore) confirm a similar trend.

Overall, our findings suggest that the Korean public sentiments present a factor that consecutive Korean governments will have to consider when conducting foreign affairs in general, and specifically in relation to China. Although the unique negativity toward China is a relatively new phenomenon, it has already become deeply ingrained in South Korean society. Despite the polarized view toward China that dominated the foreign policy discourse between the liberals and the conservatives in South Korea in recent years, both sides will need to consider widespread public negativity towards China in the coming years. 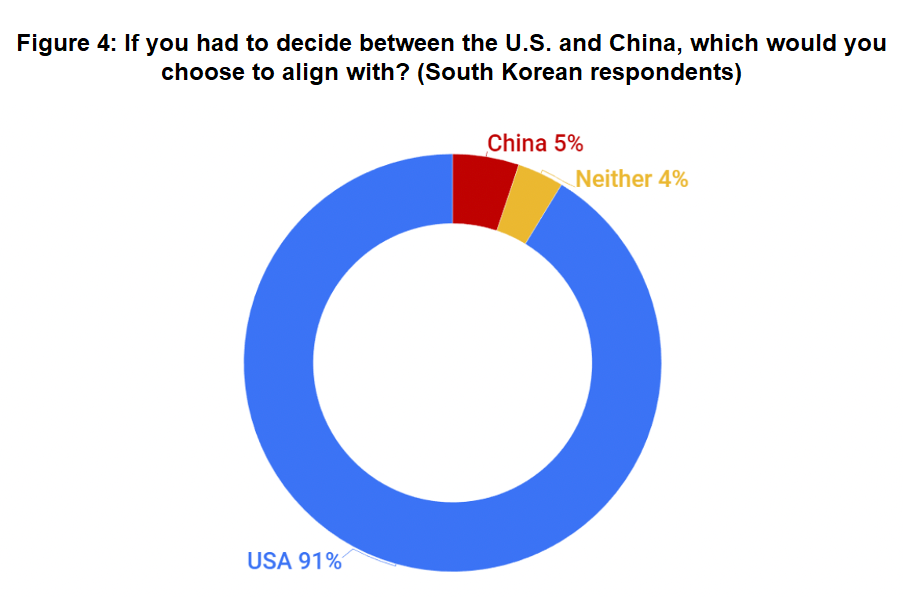 For one, this negativity is unlikely to go away with government changes, since it more or less transverses through the entire social and political spectrum. Second, the structure of Korean attitudes toward various aspects of China suggests that there is, by now, deep distrust towards almost anything China-related.

This article was produced as part of the project “Coping with China: Public attitudes in South Korea and Europe as the basis for effective policy collaboration,” funded by the Korea Foundation.

This article was originally published in The Diplomat, and was written by Richard Q. Turcsanyi and Esther E. Song.

Richard Q. Turcsanyi is a Program Director at the Central European Institute of Asian Studies (CEIAS) and a Principal Investigator at the Sinophone Borderlands project studying global attitudes toward China.