The curious case of the China-loving Slovak parliamentarian Ľuboš Blaha 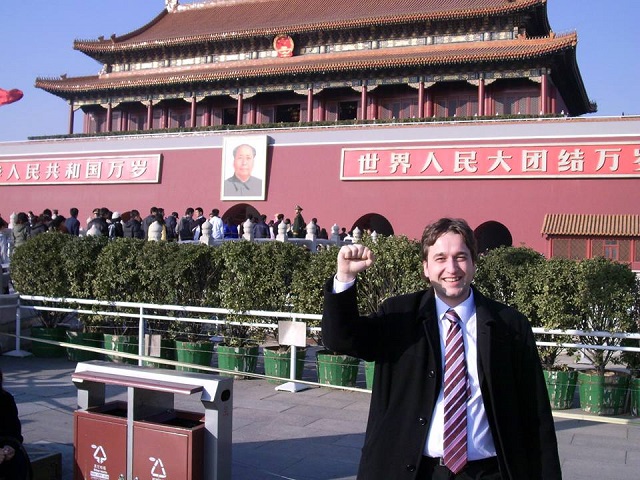 A Member of Parliament of the Slovak Republic Ľuboš Blaha led a parliamentary group on a visit to China in the second half of August, visiting Beijing and Tibet. Blaha’s real-time inflammatory ‘reports’ from the trip parroting Chinese propaganda and posted on Facebook have caused significant stir in Slovakia.

It would seem that Blaha exhibits sincere admiration for Beijing. While this may be true, his main motivation has little to do with China per se and is chiefly a function of domestic political goals. Yet, having people like Blaha their ‘spokesperson’ may prove to act against China’s interests in the long run.

Blaha visited China as one of 10 Slovak MPs in a delegation from the parliamentary group for friendship with China (only one delegation member was not a member of the group). The trip, officially dubbed a ‘study visit’, was fully paid by China. Even before the visit, Blaha started his (obviously pre-planned) series of Facebook posts on China on his public profile. Blaha extolled the virtues of Xi Jinping’s vision for the country, commending China for having lifted hundreds of millions of people from poverty and transforming itself from an impoverished country oppressed by foreign powers into a global superpower. Moreover, in terms of China’s global role, he called China a voice for peace and respect towards other civilisations.

In his other posts on Facebook, Blaha gave particular attention to the issues of Hong Kong and Tibet, which the delegation also visited during the tour. Blaha called the Hong Kong protests a US-sponsored colour revolution and criticised Slovak media for spreading American propaganda in reporting on the protests. Blaha’s post on Tibet was a showcase of all the official Chinese messages on the issue that have long been disproved. Blaha described the old Tibet as a feudalistic theocracy, comparing it to fascism. The Dalai Lama, according to Blaha, is an agent of Western powers tasked with provoking China. Blaha extolled Chinese communists for bringing social and economic development to Tibet and for their tolerance towards Tibetan traditions and religion. This was apparently proved by the fact that the monks Blaha saw in the temples were allowed to “hmmm freely”.

The fact that Blaha’s statements reflect official Chinese propaganda so perfectly is certainly worthy of attention. Blaha seems to be traversing among various topics, jumping from particular issues to general apologetics for Beijing. Not stopping with just positive representation of China, Blaha’s rhetoric is often framed negatively, putting China in opposition to the villainous liberal West and especially the US, and importantly, domestic opponents in Slovakia.

While Blaha has not initially stood out among MP’s for SMER, his profile has gradually risen. This has been fuelled by his ability to tap into a considerable sector of public opinion in Slovakia that favours pro-Russian and illiberal orientation of the country as opposed to the current Euro-Atlantic direction, and detests the political and social values of western liberal democracies. Moreover, Blaha has managed to build a very influential presence on social media. Blaha created a public Facebook page in May 2018 which has since attracted 40 thousand followers. He regularly publishes long posts with incendiary rhetoric on various topics, inciting thousands reactions from both his supporters and opponents. This makes Blaha’s page one of the most successful among Slovak politicians in terms of engagement.

Whereas Blaha’s statements have for a long time been in direct opposition with the pillars of Slovak government’s (and also SMER’s, for that matter) foreign policy, this contradiction has not been viewed as problematic by SMER’s leader, and the main power maker of Slovak politics Róbert Fico. On the contrary, it seems that Fico sees Blaha as a useful ‘attack dog’ against his opponents in the opposition and the media. Additionally, Blaha is a strong attraction for voters that might otherwise run off to the extremist anti-system parties . These have gained a stronger footing in the recent years while SMER’s support has been faltering. Blaha’s willingness to overstep the boundaries is very useful in this respect.

It is quite likely that Blaha genuinely believes his own rhetoric on China. Being a self-professed Marxist, there is a strong ideological affinity with the Chinese regime. However, keeping Blaha’s role in domestic politics in mind, his views on China can be seen under a different light. Indeed, they are almost always instrumentally linked to the domestic political struggle.

In general, China has not been a significant issue in Slovak public discourse, save for a few incidents such as when in 2016, the former president Andrej Kiska met with Dalai Lama, and in 2019, when Kiska’s successor Zuzana Čaputová brought up human rights issues with the Chinese Minister of Foreign Affairs Wang Yi. With both presidents coming from the anti-SMER opposition, they have become a target of Blaha’s virulent rhetoric. Blaha has criticised both Kiska and Čaputová for damaging Slovak relations with China. Blaha called them “American clowns”, and even reportedly denigrated them in front of Chinese partners.

Overall, when touching upon China, Blaha has been doing so in reference to his domestic opponents, if not mentioning individuals, then referring variously to liberals or the so-called “slniečkári” (‘do-gooders’). Apart from support for Putin’s Russia policies, anti-West, anti-LGBT, anti-immigration and other messages which regularly feature in Blaha’s rhetoric, China appears to have become another useful topic by which he can delineate his political opponents. Moreover, the controversial nature of his stances brings the desired attention, which is a significant goal in itself. Yet, despite pro-China statements, it does not appear that Blaha is actually interested in, or willing to promote Slovakia’s relationship with China. Rather, his use of China is ultimately self-serving, as a convenient domestic political tool to bash his opponents.

For example, Blaha has not made any comments on the decision of his own party leader and the then-Prime Minister Fico to accept former detainees of Uyghur ethnicity from Guantanamo back in 2014, despite China’s public opposition to the move and the damage caused to bilateral ties. While criticising his opponents for hurting ties with China, Blaha himself and the SMER-led governments have undertaken virtually no measures to empower Slovak China policy that has long been extremely passive. Indeed, constructive suggestions or actual political initiative on Slovak approach to China are absent on Blaha’s part, betraying his true motivation.

While assuming a link between Blaha and the Chinese embassy in Slovakia would be pure speculation, the fact remains that Blaha has in effect become the loudest voice supporting China and spreading pro-China narratives in Slovakia where China still remains on the margins of politicians’ and public interest. This brings to light interesting questions about the functioning and efficiency of the Chinese public diplomacy in the region.

Blaha’s support for China has gone hand in hand with his anti-Western and pro-Russian advocacy. While from China’s perspective it might be useful to have a reliable spokesman for China’s views, Blaha’s role may also be counterproductive. In Europe, China has been trying to present itself as a constructive global player that favours EU unity and is interested in mutually beneficial cooperation, something which should distinguish it from Putin’s Russia. Automatic association with pro-Russian and broad anti-Western currents in the public discourse in European countries may not be in China’s interest.

Furthermore, this can make any voices favouring relations with China automatically toxic and foster the growth of political antagonism on the topic. The issue of relations with China thus becomes integrated into domestic political divide, becoming more of a proxy in political struggle than an issue by itself. This is what has already happened in the neighbouring Czech Republic, as uncovered in a comparative study conducted by the ChinfluenCE project. However, it is questionable whether China is aware of this and if yes, if it is willing or even able to do something about it. With China’s objectives often running in direct contradiction to each other, it might be that it sees people like Blaha useful, even if they undermine China’s broader goals in the long run.

This article was originally published at CHOICE and is re-printed with permission.