Throwing a Party for the CCP: The Sixth Plenum and the Third ‎‎“Resolution on History”‎

Home Publikácie CEIAS Insights SK Throwing a Party for the CCP: The Sixth Plenum and the Third ‎‎“Resolution on History”‎ 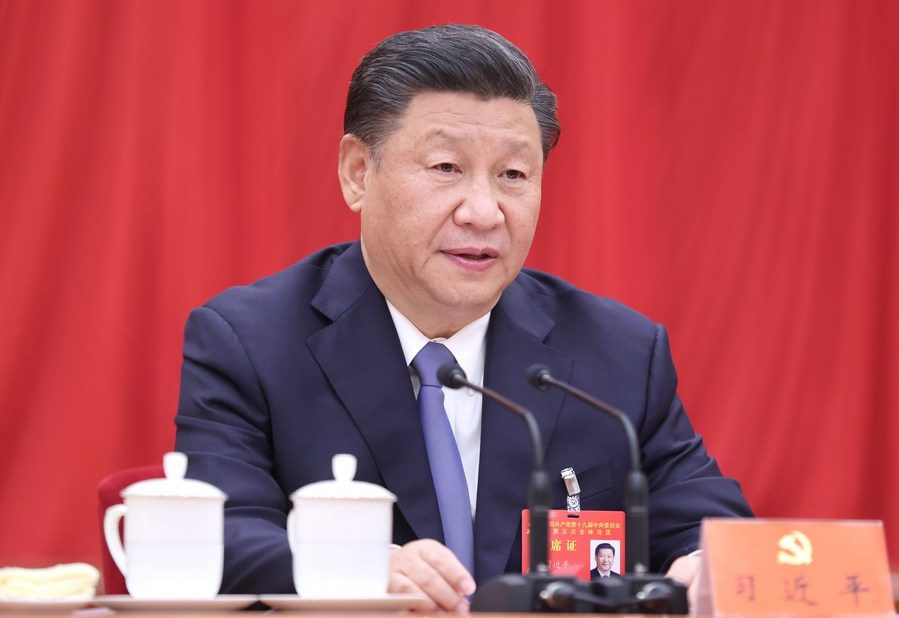 In July the CCP turned a hundred years old, and its leaders have just thrown a party to celebrate the occasion in the form of the plenary session of the Nineteenth Central Committee that took place in Beijing on 8-11 November 2021.

Although the Communiqué published on the final day of the plenum and its Resolution on “the major achievements and historical experience of the Party’s centennial history of struggle” published on 16 November both contain several references to previous leaders of the Party since Mao Zedong (party co-founder Chen Duxiu featuring only as a right-wing villain), this meeting and its pronouncements were hardly a genuine celebration of the vision and efforts of past CCP leaders. Instead, these documents—especially the Resolution on history, the third of such documents in CCP history—(re)write the history of the Party into a teleological continuity that serves to validate the agenda and slogans of the current leadership. The preamble of the Resolution makes this immediately clear: Never mind class struggle (mentioned only once in the entire Resolution, inside quotation marks) and the proletariat (zero mentions)—it is the “rejuvenation” of the Chinese nation (minzu: 93 mentions) that has represented the Party’s “original aspiration” (another key formulation of the Xi Jinping era) since its very foundation.

Ushering in the new era

The Resolution casts the current leadership, with Xi at the helm, as a sort of the third step in the dialectical trajectory delineated by the history of the Party—or better, of the People’s Republic. The first step comprises the pre-1949 revolutionary struggle and post-1949 socialist construction under Mao Zedong, both described as creating the conditions for the realization of “the great rejuvenation of the Chinese nation”. The narrative of these eras also emphasizes the Party’s dedication to fighting corruption and waste, thus prefiguring Xi Jinping’s signature campaign. It also condemns the Cultural Revolution (1966-1976) and by doing so it reaffirms the validity of the second Party resolution on history, adopted in 1981.

The second step—corresponding to the post-1978 reform and opening-up era and associated with the leadership of Deng Xiaoping, Jiang Zemin, and Hu Jintao—is credited with inventing “socialism with Chinese characteristics” and preparing in this way for the advent of “Xi Jinping’s thought on socialism with Chinese characteristics for a new era”, i.e. his contribution to Party ideology as enshrined in the 2017 CCP Constitution. The current leadership also credits itself with achieving the main development goal set in that phase, namely the building of a “moderately prosperous society” in China.

As noted by Joseph Torigian, the Resolution’s narrative of reform and opening up affirms its “pragmatic” interpretation of Marxism and the way it prioritized development and stability as correct, while rejecting leftist “dogmatism” and promising a “deepening” of economic reforms. This may have concrete implications for policymaking, as it signals that despite recent proclamations endorsing a moderately redistributive policy agenda aimed at bringing “common prosperity” to Chinese society, a U-turn towards (traditional) socialist economic policies is not on the horizon. At the same time, the Resolution implies that Xi Jinping’s rise to power marks the beginning of a new age in the history of the Party and the country. This assigns to Xi Jinping’s role the same historic importance as Mao’s revolutionary leadership and Deng’s reformist vision. In fact, as Ruihan Huang observes, “the mere act of delivering a historical resolution puts Xi into the same league as Mao and Deng”.

However, while the two previous resolutions served to settle ideological disputes within the Party, this is not a resolution that solves issues, as David Bandurski (University of Hong Kong) rightly foresaw. As official Party media and even Xi himself have insisted during and after the plenum, this Resolution signifies unity and consensus within the Party. It represents a proclamation of the Party’s cohesiveness around Xi’s leadership coming from its highest echelons, and an affirmation of its current and future supremacy on Chinese society—the key tenet of Xi Jinping’s Thought as expounded at the heart of the document. The choice of looking at Party history through a one-hundred-year frame, as Holly Snape (University of Glasgow) observes, is also meant to buttress confidence in the Party’s “scientific judgments” throughout history and in the superiority of China’s political system, a point that is also stressed in the official commentary on the Resolution.

With regard to China’s international relations, the Resolution credits Xi Jinping with forging a new “major-country diplomacy” with Chinese characteristics that prioritizes national interests while promoting the progress of humankind. The government’s assistance to other countries during the COVID-19 pandemic is described as the largest global humanitarian operation in PRC history and is said to have established China’s international image as a responsible major power. The Belt and Road Initiative is mentioned as a way for China to seize the initiative in the future of economic globalization and fuel economic development along its routes. Moreover, the Resolution adopts the all-important concept of national security that has emerged in recent years—“not just a way of conceptualizing risk to the nation-state, but rather a highly expansionist political-ideological construct that has come to subsume nearly all elements of policymaking and political considerations”—including ideological challenges to the regime and ethical values regarded as non-mainstream. The final sections of the Resolution also endorse the “all-under-Heaven” (tianxia) discourse, popularised since the mid-2000s by Zhao Tingyang (CASS), which implies that China occupies a central position in the world and emanates stability and civility.

To conclude, the Resolution mainly celebrates the accomplishments of the Party under Xi—starting with his strengthening of the Party’s grip on power and self-discipline, and continuing with the pursuit of economic development, “law-based governance”, forging the soul of the nation through socialist and traditional Chinese culture, boosting environmental protection, reforming the military to enhance its political loyalty, and so on. The focus on party building in Xi’s Resolution will not come as a surprise—after all, the other accomplishments claimed therein could be at least equally attributed to Deng, Jiang, and Hu. However, despite the centrality of Xi Jinping in the historical narrative weaved by this Resolution, the laudatio of Xi becomes the conduit for a glorification of the Party in 2021. If a “cult” of Xi Jinping is nurtured, it is a cult of today’s Party with Xi as its avatar.