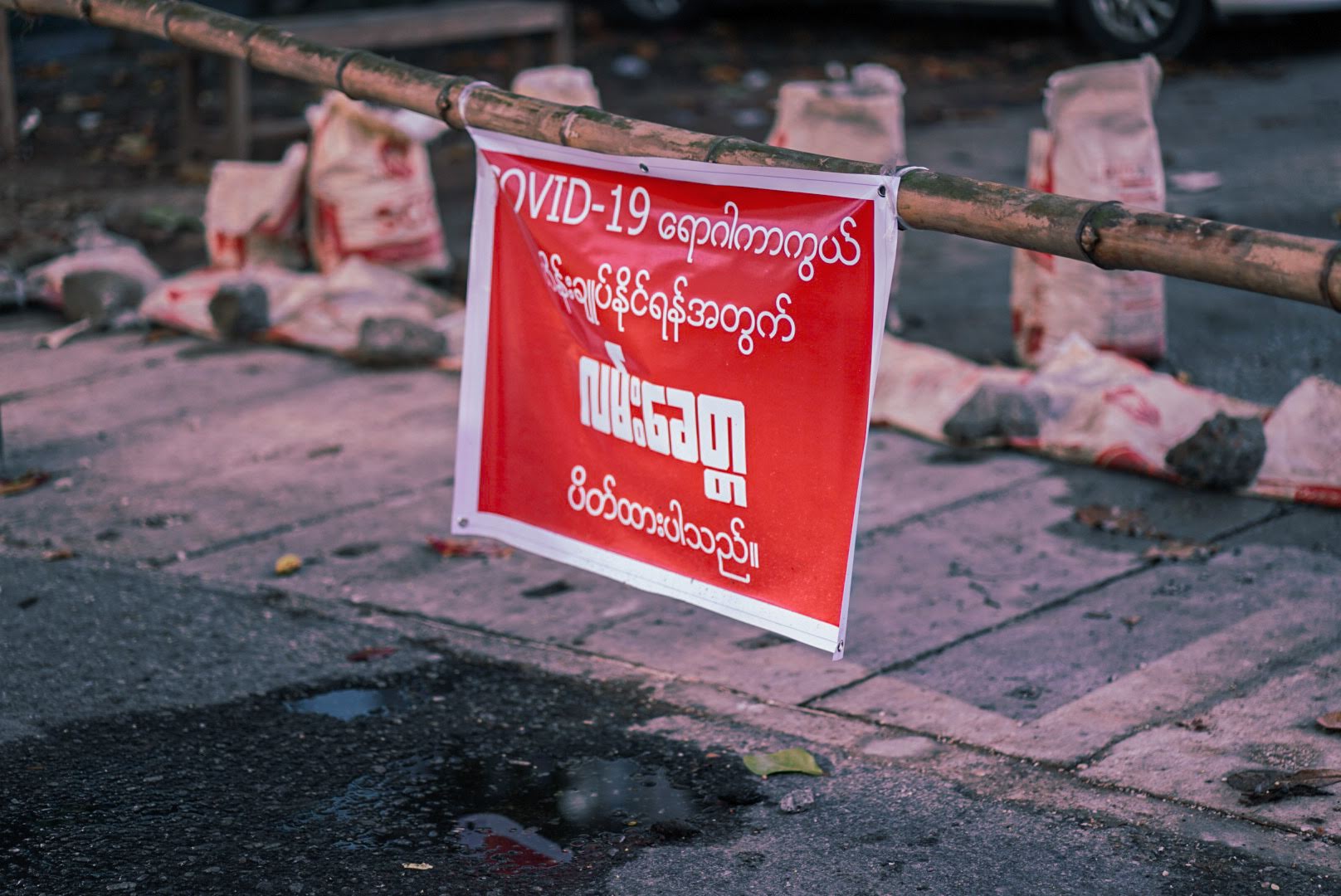 Doctors in Myanmar were the first to join the Civil Disobedience Movement (CDM) in protest of the Myanmar military’s power grab in February. The Tatmadaw responded by arresting and issuing warrants for health workers, forcing them to go into hiding. Now, with COVID-19 spiraling out of control, the junta requested the doctors to join the military-led pandemic response. But the doctors continue to defy the military orders and serve the people from private clinics and through charity organizations. By doing that, however, the medical personnel risk arrests and face shortages of critical medical equipment. Moreover, they are under psychological stress as they themselves become infected and feel the limits of their service to the people.

The second article from the series MYANMAR INSIDER UPDATES looks at the increasingly devastating health crisis caused by the third wave of the COVID-19 pandemic and the military attempts to manage it while continuing to fight the resistance of the people on many fronts.

Early signs of the third wave

The third wave crept up silently but hit suddenly in all corners of Myanmar at the beginning of July. Testing in the border towns – Kalay near the Indian Border, and Muse and Lashio in the northern part of Myanmar bordering China – showed that the more infectious variants already reached Myanmar. It was just a question of time when the pandemic spreads uncontrollably, given the complete lack of preparation and focus on the health sector by the military State Administrative Council (SAC), which had been discussing tourism development instead and continued arresting political activists.

During the two previous waves, the civilian-led Ministry of Health and Sports (MoHS) transparently shared the testing data and geographical locations of the pandemic. Since February, when the military took control of the MoHS, only about 5000 tests were conducted per day and cumulative daily data on positive cases and deaths were shared without the critical monitoring of where the cases were located. That finally changed in June, when the COVID-19 cases started to double every week, with the average positivity rate rapidly climbing from 15% to over 30% in the past week. In reality, the current infection rate is likely much higher as there are only 12000 to 15000 people tested in a day, and almost everyone I talk to now is sick or cares for a sick person in their family.

At the end of June, 11 townships in four out of 14 regions were put under the ‘Stay at Home’ order, in an attempt to control the spread. This, however, did not stop the people from going out and the soldiers continued their operations and arresting civilians. The SAC held a coordination meeting on the prevention, control, and treatment of COVID-19 on 9 July, discussing prevention and vaccine plans at the time when the pandemic has already rampaged throughout the country, hitting new highs every day. The generals have no plan for the response and treatment to control the outbreak. The lack of capacity among the military ranks to enforce lockdowns, the inability to conduct widespread testing, contact tracing, and screenings at the regional borders, combined with the utter disregard for military orders by the people and their will to resist, contributed to an unprecedented and unexpected pandemic situation. 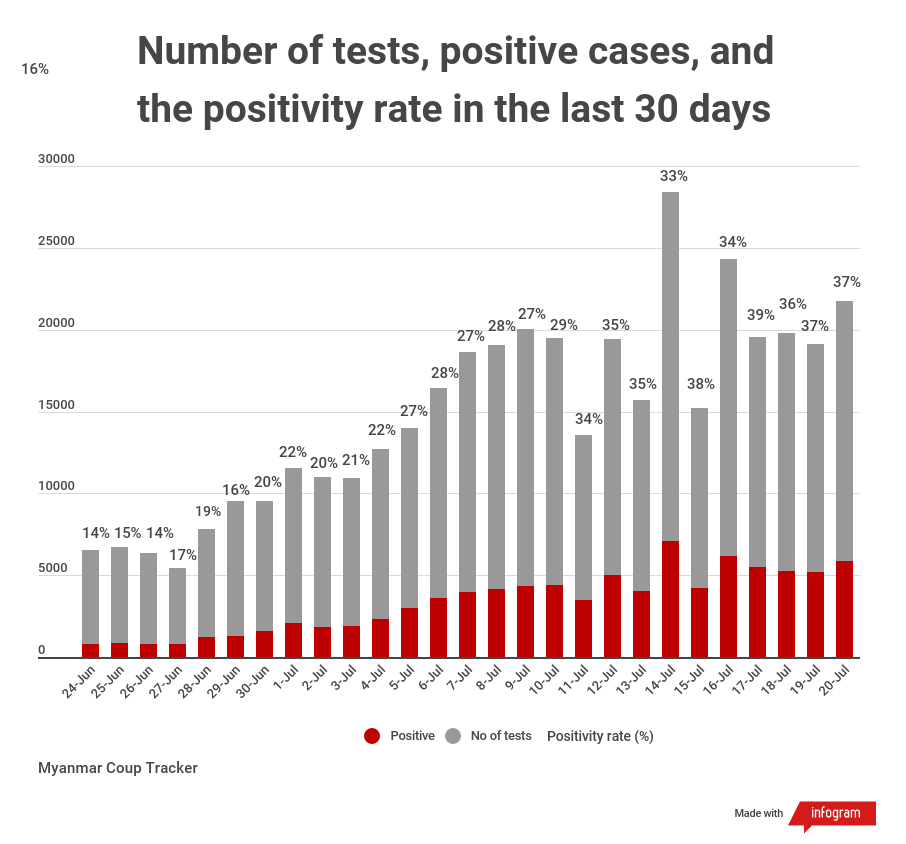 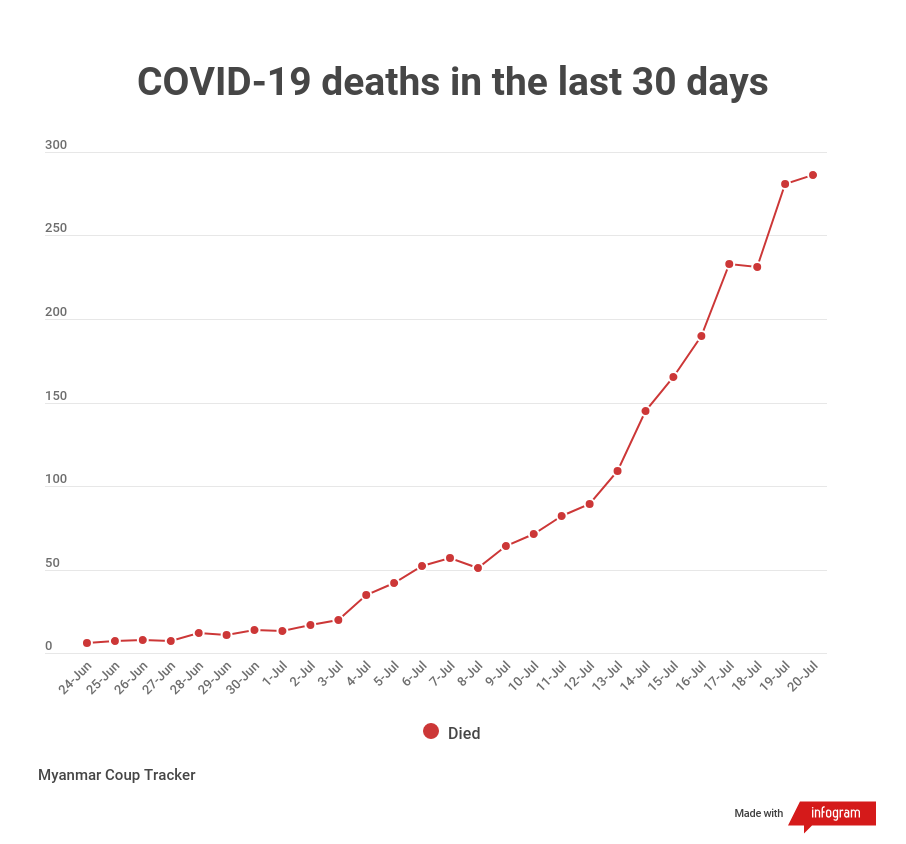 On 30 June, some 2000 people detained for participating in the anti-military protests were released from prisons nationwide. A piece of very positive news for the families of the unjustly detained, but soon some of the released started showing COVID-19 symptoms, essentially bringing the virus from the crowded prisons to their homes.

The inability to provide basic healthcare in overcrowded prisons caused COVID-19 infections in at least three country prisons. By mid-July, about 50 inmates, including high-profile political leaders from the ousted National League for Democracy (NLD) and foreign detainees – the economic advisor Sean Turnell and journalist Danny Fenster, contracted the virus in Yangon’s Insein prison and were not receiving treatment.

Despite most of the prisons being under lockdown and having suspended holding special trials inside Insein Prison, the state newspaper confirmed at least 6 deaths caused by COVID-19 to date, although the real death toll might be higher. 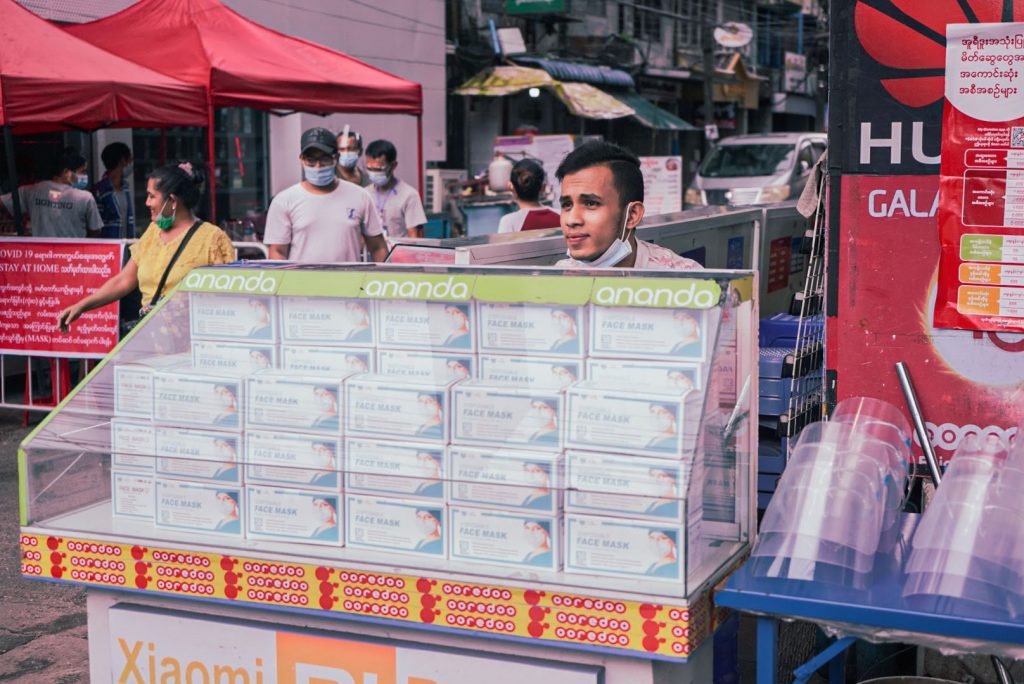 It didn’t take long to see the impact of the rapidly rising positive cases. The pharmacies ran out of the basic necessities: masks, disinfectants, hand sanitizers, but also thermometers, oxymeters, and general medicine for flu, cough, or even vitamins. If there was anything left, the price would be two-three times higher than usual.

In a course of few days, social media filled with requests from people searching for oxygen for themselves or their sick relatives whose O2 concentration in their blood suddenly dropped. The prices for oxygen doubled and factories and private oxygen plants faced surging demand, with people queuing to refill O2 cylinders from 4 am. Facebook posts about the availability of oxygen became scarce as the factories ran out of their supplies. Desperate pleas for oxygen cylinders for sick family members were later edited as the people passed away. Soon, some pharmacies and factories had to close as their own staff became infected.

After denying that the country was facing an oxygen shortage and ordering the oxygen factories to prioritize government hospitals and stop selling to individuals, the military news published a daily series of photos showing truck deliveries of oxygen supplies from neighboring countries to showcase their effort to increase the supply of oxygen. However, because of lack of beds and staff in public hospitals, most of the infected people are currently undergoing self-treatment at home. If the regime will keep regulating the oxygen, thousands are likely to die in their own homes because their families are unable to find the supplemental oxygen they desperately need.

Seeing the words ‘Dead Body Carrier’ on the windshield of a car parked in front of my neighbor’s house, I understood the grim reality: someone in our community just died. Almost everyone now has someone in their family who is sick. Many families have lost their family members because they could not admit them to the hospital or find oxygen for them. Even beds in private hospitals are full, with many people on waiting lists. Those experiencing mild symptoms are only examined but not tested and sent home to isolate.

The volunteers who carry the bodies of people who died at home to the burials often work long hours and have to move around during the curfew hours (4 am to 10 pm), risking arrest or harassment.

In the absence of proper management and instructions, the communities developed their own alert system – hanging a white piece of cloth from a window means a cry for help with food and basic necessities in a household affected by COVID-19; hanging a yellow flag means a COVID-19 health emergency – requesting a volunteer to come to check on the household and deliver medicine. 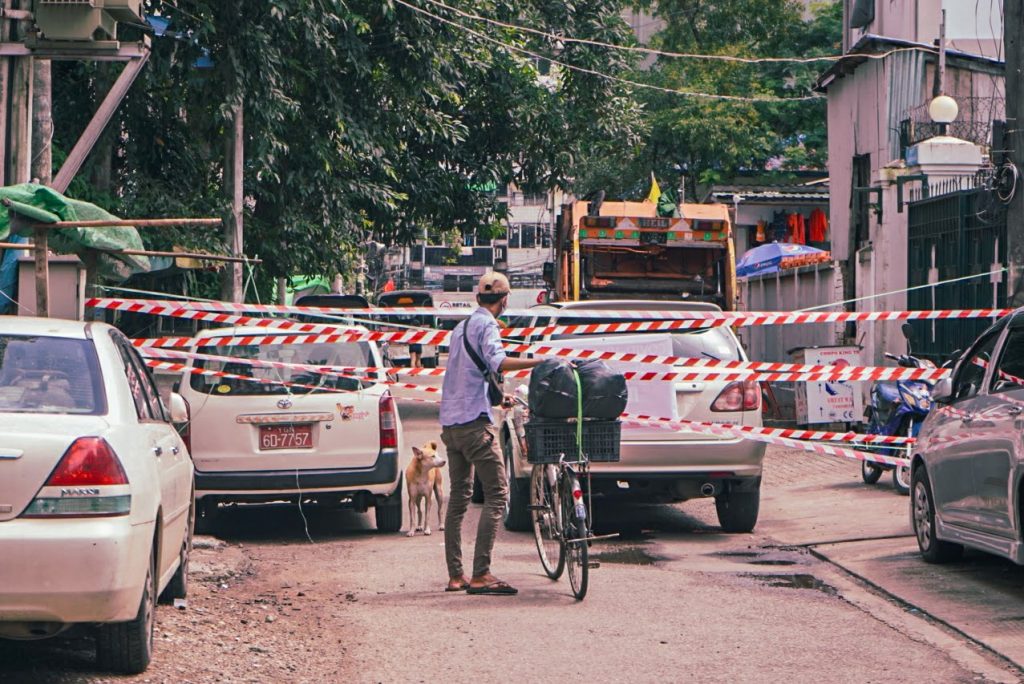 In January, every ward administrator collected names of people who wanted to get vaccinated so that the government could put together an order for the Oxford/AstraZeneca vaccines made by India’s Serum Institute (Covishield). It was essentially a people’s census as literally, everyone put their name down.

With the initial 1.5 million of 30 million secured doses arriving at the end of January, the frontline healthcare workers received their first dose. After the military took power and the healthcare professionals went on strike, they refused to get vaccinated in protest. The remainder of those vaccines went to the military personnel and for the public at military-managed health centers in the country. But again — many people didn’t trust the vaccines and refused to get vaccinated, showing their defiance, albeit self-destructive, to the military administration.

With the current rapid spike in COVID-19 cases, the military ordered 6 million vaccines from China and 2 million doses from Russia, aiming to vaccinate 50% of the population in Myanmar by the end of 2021. This is an ambitious plan given that only 1.75 million of the country’s population of about 55 million are fully vaccinated to date. With the lack of data about the Chinese and Russian vaccines’ efficacy against the more infectious variants and other Asian countries opting for other vaccines (after seeing their health workers becoming infected despite having been vaccinated with China-manufactured vaccines), it’s unlikely that people in Myanmar would want to get vaccinated.  A more likely alternative are the private providers who had been allowed to import vaccines and administer them. But that will come at a cost. One private hospital quoted a tentative price of 120 USD for two doses of an Indian-manufactured vaccine. In a country where that cost equals a monthly wage, many people will be left out.

Bringing the pandemic under control

In the first months following the coup, evidence of soldiers abusing, beating, and arresting health personnel circulated widely in the media. Emergency health workers, rescue professionals, and doctors treating the wounded in the protests were threatened, harassed, abducted, and arrested at gunpoint by the military to prevent helping the anti-military opposition. Rescue vehicles often drove with white flags to prevent being shot at. Besides breaking the Geneva convention’s medical neutrality that requests not to attack medical units under any circumstances, it shows that the military knows no limits.

180 medical professionals have been arrested, 13 health workers professionals have been killed and over 400 were issues warrants since the coup, according to the Assistance Association for Political Prisoners. Moreover, the junta’s lockdown restrictions interfere with medical care and medics and volunteers worry they will be shot at, arrested, or worse – killed when they go out to provide treatment.

In a recent incident, the soldiers made a fake call to one of the volunteer groups working with CDM doctors, only to arrest the doctors when they arrived. Such actions further complicate the COVID-19 emergency response and exasperate the deep distrust for the military among the public. Following this incident, many volunteer and charity organizations announced that they no longer would be providing their service in order to protect their staff. The SAC’s public calls for volunteers and health professionals to help them will most likely remain unanswered and the community volunteers, CDM doctors, and private groups will rather do their part, even if facing the risks.

Despite imposing ‘Stay at Home’ orders for 86 townships until now, the cases keep raising as the markets have not formally shut down and no proper lockdown measures have been introduced and enforced. The junta announced a public holiday from 17 July to 1 August, closing schools and repeating their instructions to stay at home during that time. Yangon looks a lot emptier, although there are still cars on the roads, many shops remain open, and street hawkers go around selling their products. The only notable difference is that now everybody wears masks outside – a lot of people wear two and those who don’t wear any get shouted at.

According to points 2 and 3 of the SAC’s five-point roadmap, the military aims to “prevent and manage the COVID-19 pandemic” and “ensure the speedy recovery of businesses from the impact of COVID-19”. However, the efforts have been limited to prioritizing medical care for their own personnel in the military health facilities and ordering oxygen for public hospitals that require patients to present a recommendation from a local military officer in order to be admitted. Even though the SAC took over the management of the health centers and quarantine facilities built by the private sector last year, they cannot count on the hundreds of volunteers and private businesses who helped manage the second wave, as many are in opposition to the military’s administration.

The lack of trust towards the SAC and the ineffective measures have left the people to work within their trusted networks only. A combination of undisturbed and unthreatened peoples’ efforts in their own communities and military cooperation with humanitarian organizations is needed to bring this situation under control. In times when the SAC government can’t manage the crisis the least, it could do is to step out of the way and allow other groups to reach the affected population. Even if they later claim the credit for it.