China and the Visegrad countries: Policies, goals and discrepancies 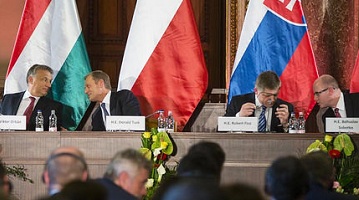 Among the 16 Central and Eastern European (CEE) countries which are members of the China-tailored ‘16+1 platform’, the Visegrad states (V4) comprising of Hungary, the Czech Republic, Poland and Slovakia have since the platforms inception, been measurably advanced of their neighbours. However, there may be signs that its position within the CEE16 is ebbing. After the initial high level 16+1 meetings in Budapest and Warsaw, last year’s summit took place in Bucharest and this year’s gathering has been recently called for December 2014 in Beograd, irrespective of attempts by both the Czech Republic and Slovakia to host the event. Similarly, Hungary did not achieve its strategic partnership with China, in contrast to Serbia’s and Albania’s success in this endeavour. All in all, the four Visegrad countries have seen only modest improvements in economic relations with China since the diplomatic offensive started with the formation of the 16+1 platform in 2012.

The V4 countries are among the most developed and economically important states in the CEE16. They constitute roughly 4/5 of China-CEE16 trade and receive the bulk of Chinese investments in the region. They score highest in terms of tourist destinations and have embarked on various dialogues with China on multiple governmental, business and policy making levels. Its potential has been acknowledged also in the recent reports by Beijing’s CASS Kong Tianping and Liu Zuokui, who mention its “special position” in trading with China. The report puts them in the top four places among the CEE16 as attractive destinations for Chinese investment.

In relations with China, the V4 basically seek to achieve the same goals – greater direct investments in their economies and increased exports to China. While their success/failure in these aspects remains roughly similar, they employ different strategies. Hungary went furthest when it seemingly believed China could provide an alternative solution to the Western institutions for its financial and developmental problems. Budapest’s gamble that good political relations with China would transfer into significant economic benefits has not materialised and it remains to be seen how sustainable the approach will be if a rapid increase of China oriented economic growth does not arrive.

Similarly Slovakia believed for some time that Chinese investments could solve the major economic issues in the country, such as poor or underdeveloped infrastructure. However, this initiative came to an end after the elections in 2010, when the new centre-right government preferred EU-funding and also took a more critical approach towards China. The failed case of Chinese highway construction in Poland led even the returning left-wing government in 2012 to abandon its considerations. Under the relatively stable, economic conditions in the country at present, it is not beneficial for the Slovakian government to enter into a risky Chinese deal. Public opinion which perceived China rather cautiously may also play some role in this policy change.

This is the case even more so for the Czech Republic which has framed it’s foreign policy as an increasingly outspoken critic of China’s human rights record. However, there is no consensus on this issue in the country. While many conservatives and liberals took critical stance towards China, left-wing politicians call for pragmatic economic relations. The divided public opinion means that every election can bring about adjustments in the country’s China-policy. While it is not clear whether the critical stances towards China actually affected the outcomes, it surely did not help either.

Finally, Poland has recently been able to conduct pragmatic diplomatic relations with China, which in 2012 were elevated to a strategic partnership. While not overtly pressing its “values” yet standing its ground on some issues, Poland has been able to push forward its economic interests with China. There has been an apparent continuity and general political consensus on this approach in recent years in Poland, which has proven useful for Chinese policymakers. This functional approach combined with its economic size and dynamic development makes Poland a front runner of not only the V4 but the whole CEE16 in the eyes of Beijing. However, similarly to its V4 partners, it has not achieved breakthrough economic success so far – with hard earned experience relating to a failed Chinese constructed highway in 2011

There may be two basic argumentations for this alleged ‘failure’ of the V4 countries to capitalise on the recent rapidly developing relations with China. On the one hand, China may just prefer to deal with the non-EU member countries among the CEE16 which are not subject to EU and OECD regulations that China finds unfavourable. Further economic reasons might be that China wants to secure these markets for its cheap products. Geo-economically, the countries in South-Eastern Europe may have useful position for China due to transport routes. On the political side of this line, China may be seeking to subvert the EU integration process and/or the unity of the EU by playing members off against one another and building rival partnerships with prospective members. This argument could be further supported by the fact that these countries and their public perceptions are less critical towards China than those in the V4as demonstrated by the Czech Republic. In this context, being non-EU members makes these states preferred partners for China.

On the other hand, while acknowledging some value in the above arguments, China is trying to move up the value-chain and for this to occur, relations with the developed world are vital. Furthermore, China would like to see a multipolar world order, which is hardly possible without a united or multilateral Europe playing a role. China may still seek to create a favourable position to influence the EU decision making process – something for which good relations with the EU members are useful. EU members and the economically advanced countries among the CEE16 should be preferred for partnership.

It may seem that the second line of argument is in conflict with evidence of the V4 states’ relative failures in dealing with China. However, it should be noted that these V4 “failures” are only failures when measured against very ambitious foreign policy goals. In fact, the majority of the V4 hopes vis-à-vis China come from expectations of the rapid increase of investments, mostly in the form of green field investments and/or investment and support for problematic companies, to a lesser extent increasing exports, and perhaps the unrivalled leading position within the CEE16. The alleged shift of Chinese attention away from the V4 can thus be interpreted as the Chinese policy of having good relations with as many countries as possible. Furthermore, Chinese investors may be really inexperienced and have little knowledge about the realities of the region and combined with the strict EU rules, regional inefficiencies and poor technology may significantly decrease the willingness of potential investors to enter the market.

The conclusion is that the V4 countries should have patience and realistic expectations of China and plan their China-policies accordingly. While stable and working diplomatic relations are useful for both political and economic reasons, they are not a recipe for the instant growth of financial inflows and exports. At the end of the day, Beijing has many goals, some of which may be contradictory, and want to have as many good relations as possible, including with the V4, the CEE16, and the whole EU.