Do the Central European media show caution towards China? 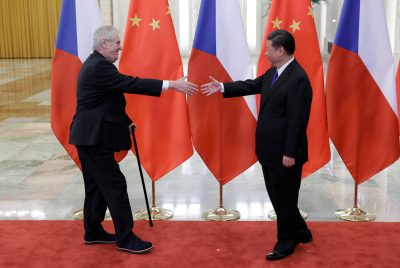 Article by Matej Šimalčík published at the East Asia Forum:

Since the announcement of Chinese President Xi Jinping’s Belt and Road Initiative, China has focussed more and more on Central and Eastern Europe, and what started as China’s ‘charm offensive’ has developed increasingly sharp spikes in regional media outlets.

Local media outlets play the important role of intermediary in communications between China and the region. There are stark differences in the perceptions of China among individual countries in the region — especially between Slovakia and the Czech Republic, which both play a transit role in the Belt and Road Initiative.

Unlike in Slovakia, there have been several Chinese investments in the Czech Republic that are unrelated to Belt and Road transit networks. These range from investments in media to infrastructure to the purchase of the Slavia Prague soccer team. Chinese investment in the Czech Republic increased after the latter’s dramatic and pragmatic shift of foreign policy towards China in 2013. In early 2017, Slovakia similarly moved towards a more active foreign and economic policy regarding China.

Despite Slovakia and the Czech Republic sharing a common history (including historic ties with China as part of the Communist bloc before the Chinese–Soviet split), they now hold very different views on China, which can be seen in the topics the media choose to cover.

Czech media outlets focus on the increasingly pragmatic Chinese–Czech relationship. Slovak outlets cover bilateral relations with China only marginally in favour of news regarding China’s economy and Chinese domestic affairs. As a case in point, Slovak media outlets published a greater volume of articles on China in 2012 and 2015 compared to previous years, which was driven by the change of the Chinese Communist Party’s leadership and turbulence on the Shanghai Stock Exchange respectively.

On average, Slovak media outlets tend to have negative perceptions of China: only one media outlet consistently reports positively on China, and this outlet is non-credible given its repeated publication of unverified and manipulated misinformation. Despite this, the Belt and Road Initiative has all of a sudden begun to receive favourable coverage. This was most prominent in two Slovak daily newspapers: the economically oriented Hospodarske noviny and the left-leaning Pravda.

In the Czech Republic, positive reporting on China was most dominant in the hardline leftist paper Halo novinyas well as in TV station Barrandov and in the weekly magazine Tyden. The latter two have changed their coverage of China to exclusively positive since they were purchased by CEFC China Energy, which is reported to have ties to Chinese military and intelligence agencies .

To further develop bilateral relations, China needs to take into account the public discourse of target countries. The importance of understanding other cultures and domestic settings is not a new concept in Chinese political philosophy and dates back to Sun Tzu’s Art of War. More recently, Zhao Lei, a professor at the Chinese Central Party School, recognised the need to use other countries’ domestic media outlets to spread a positive image of China.

Further expansion is planned in Central and Eastern Europe. CEFC China Energy now aims to buy other media outlets in both Slovakia and the Czech Republic, including the countries’ most popular TV stations (Markiza and Nova). If the sale goes through, Chinese influence in the region will grow. This could distort views on bilateral relations by downplaying the sensitivity of Chinese investments into critical infrastructure and media outlets, by overselling the benefits of certain political decisions or even by spreading Chinese narratives on contentious issues such as Tibet, the Uyghurs and the South China Sea. To prevent these risks, it appears prudent to consider media ownership rules that would prevent foreign ownership by persons from non-democratic countries.

This does not mean that any Chinese investment should be rejected as potentially threatening. Turning the Belt and Road Initiative into a security issue would be detrimental, as it would most likely lead to the rejection of projects and investments that could be beneficial for all the parties involved. Nevertheless, both Slovakia and the Czech Republic need to engage in a constructive public debate on the nature and goals of their relationship with China. Media analysis shows that this debate is non-existent in Slovakia and thoroughly politicised in the Czech Republic. Without this debate, two fundamental questions will go unanswered: what are the countries’ respective interests regarding China, and what are the acceptable costs for achieving these goals?

Matej Šimalčík is a research fellow at Institute of Asian Studies, an international relations think tank based in Bratislava, Slovakia. The article was produced as part of the ChinfluenCE project, and with the financial support of the National Endowment for Democracy.