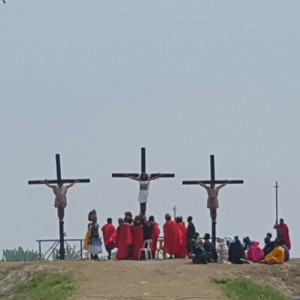 ines are the only predominantly Christian nation in Southeast Asia and each year on Good Friday attract thousands of tourists to witness the tradition of the passion of Christ in San Fernando, a town north of Manila. This event is not only about the crucifixion, self-flagellation, celebrating religion and faith, but also a good chance for big companies and small sellers to earn some money.

According to the historical documents, the flagellation as a form religious self-mortification was unknown in the pre-Spanish period. Yet only some 30 years after the arrival of the Spaniards, self-flagellation was already an established mass phenomenon, exercised in some parts of archipelago. Even though the Church forbade the exercise, it turned out to be ineffective and the ritual self-flagellation has been preserved as an uninterrupted tradition for more than 350 years up to the present day. Ritual crucifixions, however, were absolutely unknown in the Philippines until the second half of the 20th century.

The crucifixion event organized in San Fernando, Pampanga, is acted out according to the Passion of the Christ written by a local playwright in the 1950ʼs. The whole process of rituals of a crucifixion by nailing started in 1961 with a faith healer, Arsenio Añosa. His crucifixion was performed annually between 1961 and 1976, prior to his first crucifixion he was a flagellant who through crucifixion intended to get closer to Christ, closer than flagellation permitted, and acquire healing power. In the 1980s the Department of Tourism started to sponsor crucifixion financially. Meanwhile, the multinational corporations, Coke and Pepsi, discovered the place and since then have erected sponsorship banners and drink stalls at ʺCalvaryʺ where the crucifixions take place. The crucifixion is performed by volunteers, about 10-15 persons, exclusively males, even though in the past even some females participated and in 1994 a Belgian lady was crucified as the first foreigner in the history in the Philippines. During the day, self-flagellating volunteers make a procession down a streets, followed by children and fascinated spectators, others dragging heavy crosses. The whole play starts at midday, exactly according to the Bible. The volunteers dressed as Romans come to the ʺCalvaryʺ together with three “convicts”, one of them representing Jesus, later to be nail hammered to the cross. Devotees say they endure the suffering to get closer to God, to earn his favor and gain forgiveness for their sins.

Each year this event attracts about 25 thousand spectators including about 1500 westerners and has turned San Fernando into the most popular and best-known crucifixion site in the Philippines. On one hand there are volunteers seeking salvation but for vendors the Good Friday is about quick gains. 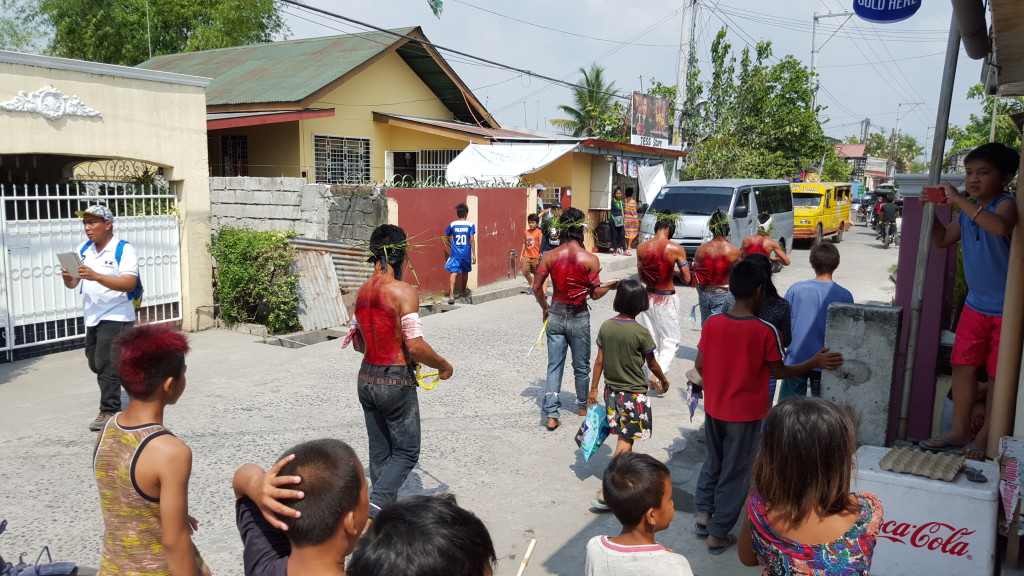 The Pepsi banners along the streets with details of the way of Jesus to the Calvary, vendors selling water, locals offering parking spaces in their backyards. The whole place seems more as a kind of a festival. At the entrance, you have to go through the security check. Right after passing, you find yourself surrounded by volunteers from Globe, the Philippines’ telecommunication company giving you a free sim card. Then you can continue to buy yourself something to eat or to drink, either from a local or from fast food chain McDonalds’. The place is well suited to handle large crowds, from VIP zone, ambulance, to chairs and portable toilets. There are vendors selling hats, umbrellas or scarfs, stalls with souvenirs so you can spend a pretty amount of money even before the ceremony starts.

Among the key sponsors of this event are two of the country’s largest mobile phone companies. In exchange for a place to promote its merchandise and free advertising one of them provided free Wi-Fi access on-site and live-streamed the event on the Internet. This enabled instant uploading of pictures and selfies taken with the bare-chest men whipping their backs bloody or with crucified devotees for background. Actually it was a huge success as you could as a subscriber buy a phone and some Internet data for the equivalent of $19.

Officially, the Church in the Philippines discourage these extreme forms of piety, fascinating many of the country’s over 80 million Catholics, as well as commercialism following the event. It is for sure that at its beginning, the tradition was more about the spiritual significance and devotion to God. Nowadays it has become a cultural activity attracting each year more and more curious tourists especially from nations with a shared Catholic heritage in Europe and Latin America who are willing to spend their money there. Sponsors and avid spectators with money to spend have become an inseparable part of this event. Like it or not, without the spectacle of crucifixion, San Fernando would be just another small town where nothing happened all year long and where people lived on the edge of poverty without a chance to change it.