China and the independence of Catalonia

Home Publications CEIAS Insights China and the independence of Catalonia 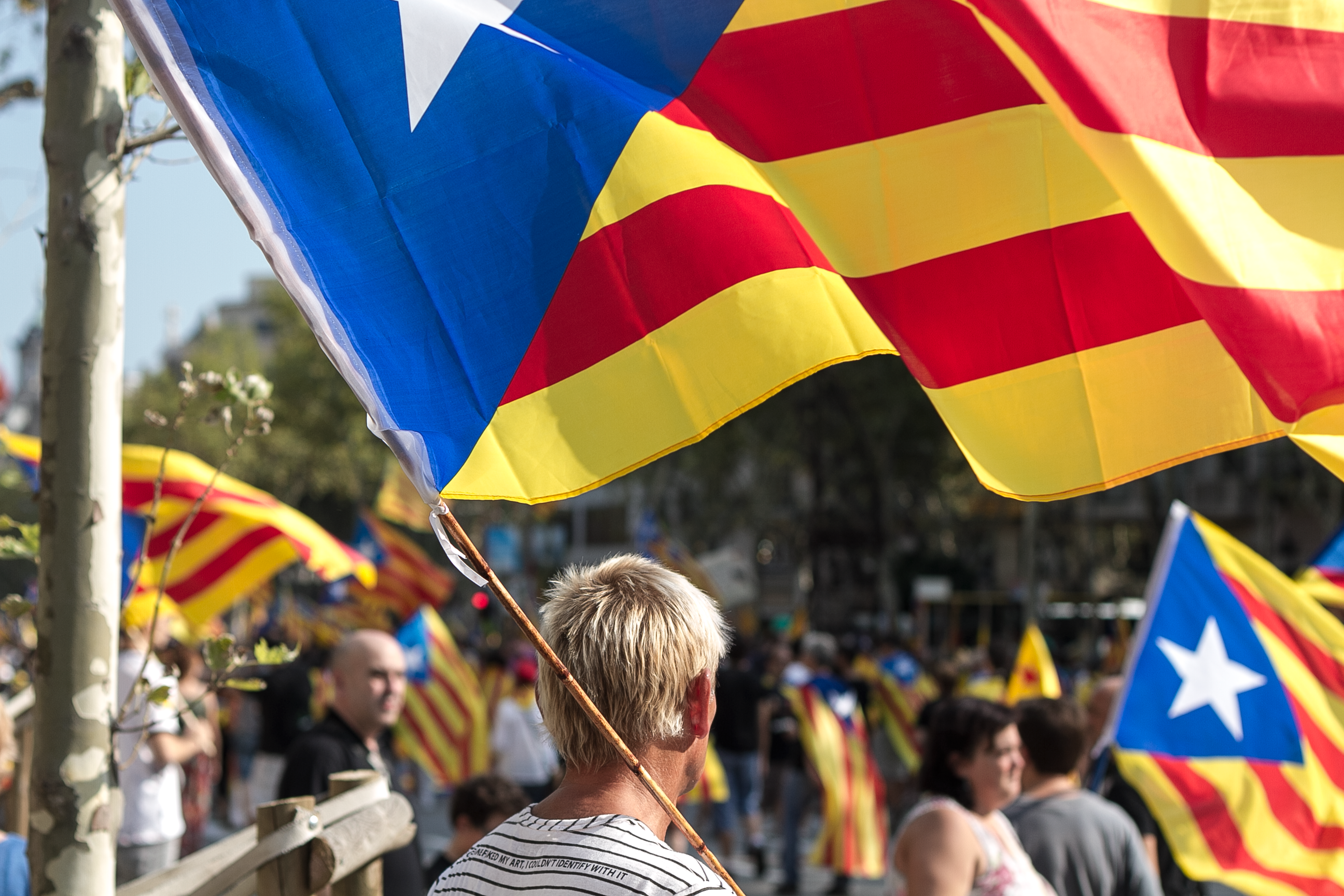 Since 2017, the political conflict in Catalonia has been a recurrent topic in European politics. Although Catalonia is located at the opposite end of Eurasia, China has also been paying attention to the independence movement, expressing support for Spain’s territorial integrity. At the same time, Catalan pro-independence parties have begun to be interested in China, although with different approaches.

China has progressively become part of daily European political discussions, even in topics where we would not have expected ten years ago. That is certainly also the case of the conflict between Catalonia and Spain, and the dramatic events of the Catalan self-determination referendum of 2017. China, although being a distant and peripheral actor, has sneaked into the discussions about Catalan self-determination.

China considers separatism, along with religious extremism and terrorism, as one of the three evils that should be combated globally. However, Great Powers can be flexible when it is other’s territorial integrity what is at stakes. The People’s Republic of China has a long history in supporting subversive or liberation movements around the world. In Mao’s time China sponsored revolutionary movements in Africa, being, for instance, a key supporter of the Algerian Liberation Front in its struggle for independence. After Mao’s era, China’s approach to foreign conflicts has been more moderate and discrete. However that does not mean that China has discarded having a say in other’s countries affairs. For example, in 2011, Beijing played a significant role underpinning South Sudan’s independence, when it rapidly accommodated to the new situation.

As China has been growing more interested in the region of Southern Europe, so did grow its interest in Catalonia as well. The relationship between the autonomous government of Catalonia and the People’s Republic of China can be traced back all the way to 1988 when the former Catalan president Jordi Pujol traveled to China. Paradoxically, during the 1990s and early 2000s, the Catalan government had a smother relation with China than Madrid, which was focused on Latin America and Europe.

Nowadays, Catalonia receives more Chinese attention than the rest of Spain. For instance, the port of Barcelona, one of Spain’s key infrastructure, is owned by Hong Kong-based Hutchison. In 2014, the company invested 100 EUR millions in building a new terminal of the port. However, the political situation of Catalonia, with an important movement advocating for self-determination, may be a challenge for Chinese interests.

The relation between Spain and China is sound to a certain extent. Both Beijing and Madrid share a common distaste for domestic separatist movements; both countries have stated their mutual support for their territorial integrity. Spain usually avoids engaging in critical stands against Chinese internal affairs. Moreover, in 2019, Spain extradited 94 Taiwanese citizens to Mainland China. Beijing requested the extradition because the crimes were committed against mainland Chinese citizens and based on its consideration of Taiwan as part of its territory. As Western countries are usually reluctant to extradite Taiwan citizens to the Mainland (especially because of the use of death penalty in China and lack of due process), Spain’s compliance with China’s request is all the more meaningful.

In terms of commerce with China, Spain is still behind other European countries. However, Chinese companies have an important influence on Spain’s port infrastructure. Spain and China are also connected by the train line from Madrid to Yiwu. Nevertheless, Madrid has refused to sign a memorandum of understanding on the Belt and Road Initiative. In his 2018 visit to Spain, Xi Jinping was unsuccessful in making the country formally joining the Belt and Road.

Overall, Madrid is far from being considered a close ally of Beijing. Spain has been, indeed, blocking China’s attempts to expand its influence in Southern Europe. If there is not a 6+1 (Portugal, Spain, Italy, Cyprus, Malta, and Greece + China), it is largely because of Madrid’s opposition to it. In this regard, Spain remains a stronghold of Germany’s and the EU’s interests in Southern Europe. With the campaign for repressing the Catalan pro-independence movement going on, Spain would not risk infuriating its European allies.

China and the Catalan declaration of independence of 2017

During 2017, China, as all major international actors, immediately opposed the referendum and the declaration of independence by the Catalan government. Beijing was supportive of the measures taken by the Spanish government to preserve its territorial integrity. In October of 2017, the Chinese official media paid attention to the situation in Catalonia. For instance, the Catalan uprising was highlighted prominently in Chinese media such as the nationalist Global Times, ranking only second to the 19th Chinese Communist Party Congress.

In November 2017, Chinese officials had their first meeting with members of the EU Parliament after the events in Catalonia. They asked to introduce the Catalan issue into the agenda of the meeting. That was done to use the EU’s acceptance of Spain’s use of force to crackdown the Catalan referendum as a precedent allowing Chinese actions in dealing with its homeland separatists. Besides, Ma Xiaoguang, the spokesperson of the Taiwan Affairs Office of the State Council, presented the failure of the Catalan pro-independence movement as a reminder of the futility of any Taiwanese independence attempt.

However, it is interesting to notice how, despite the prospects of political turmoil, Chinese economic activities in Catalonia kept increasing. In 2017, trade between Catalonia and China grew 17.7% reaching €1.5 billion, a historical maximum. Catalonia has received significant investments in the last years. For instance, in 2018 Chinese investors acquired 53% of the media group “Mediapro” for €1 billion. Besides, Barcelona will host the first Centre of Chinese Traditional Medicine outside Asia, with an investment value of €80 million. That could implicitly mean that for China Catalan independence was not perceived as a threat. Maybe because Beijing did not think that independence would happen.

On the other hand, there is an accusation made by the Spanish police, as part of the general investigation against Catalan pro-independence officials, which implicates China’s dealing with the Catalan separatists. According to police sources, Pere Aragonès – vice-president of the Catalan government and former Catalan Minister of Economy – supposedly visited China looking for financial aid to set up a Catalan central bank. The evidence provided does not conclude whether the Catalan officials reached an agreement with the Chinese counterpart. Nevertheless, such accusations have been categorically denied and until now have not yet been proved.

The pro-independence movement tends to be supportive of countries and political movements with which it considers to share values. It does not approach international relations with a realpolitik kind of thinking based on national interest. In general terms, the pro-independence movement still has an unmatured approach to international affairs, lacking deep geopolitical calculus.

In this fashion, there is a loose sense of solidarity towards different minorities in China struggling to preserve their culture and identity. Due to China’s authoritarian politics, it is commonly regarded by mainstream pro-independence opinion as an unfriendly country. Nevertheless, the Catalan self-determination movement is not monolithic and there is not a unitary position regarding China.

On the liberal and center-right edges, hostility towards China has increased along with the general trend in the West. The Catalan president in exile, Carles Puigdemont, has taken a strong critical position towards China. Puigdemont met with Ai Wei-Wei, the Chinese dissident artist, who also visited the Catalan independence leaders in prison. Both Puigdemont’s party and the Council of the Republic – which he presides, and acts as the so-called Catalan Republican government in the exile – have published a communiqué supporting Hong Kong’s protests and its right to self-determination. Besides, Ramon Tremosa, former Member of the European Parliament, met with the Dalai Lama in 2018 as part of a delegation of the liberal group ALDE.

Besides, Taiwan’s President Tsai-Ingwen has also paid attention to the Catalan conflict. In her international response to Xi Jinping’s speech about Taiwan unification, she used the Catalan language and the Catalan pro-independence flag. That gesture was answered with the attention and solidarity of President Puigdemont. Indeed, current Taiwan’s desperate diplomatic situation may open the possibility of further interactions with the Catalan pro-independence movement. On the other hand, Hong Kong’s singer and activist Denise Ho has expressed solidarity with the struggle in Catalonia.

As the opinions of Aleix Sarri – advisor to President Quim Torra in international affairs – and professor Josep Alay – advisor in international affairs at the Council for the Republic– regarding China show, their approach could be explained as an attempt to use the new conflictive dynamic between Western democracies and China to frame the Catalan cause within a global struggle between liberalism against authoritarianism. Their main goal would be to present in front of international opinion Spain’s attitude towards Catalonia as part of a new authoritarian wave represented by China – but also Turkey and Russia – in its management of internal dissidence and minorities.

However, on the left, the position towards China is friendlier. For instance, in 2018, one of the first acts of the new Catalan Ministry of Foreign affairs, in the hands of the Catalan Republican Left, was meeting with China’s Consul in Barcelona. The party also usually avoids harsh criticism on China and their youth organization even greeted the People’s Republic of China on their 70th anniversary on Twitter.

On the ranks of the radical left, Roger Castellanos, member of the standing committee of Free People – an internal current of the radical left-wing party Popular Unity Candidacy – has expressed his sympathies to the Chinese model, in terms of economic modernization as an alternative to Western neoliberalism for developing countries. He has regarded Hong Kong protests as “imperialist inference.” He also views with skepticism movements such as Tibetan separatism, considering it driven by conservative rationality. Nevertheless, these opinions are not necessarily shared by the whole of the Catalan radical left.

The positions of Catalan left-wing politicians are a mix of pragmatism and ideological sympathy. China is acknowledged as a major power of the contemporary world politics with which a hypothetically independent Catalonia should have good relations; regardless of China’s political regime. On the extremes of the political spectrum there is also a loose ideological sympathy with the People’s Republic anti-imperialist rhetoric and revolutionary history.

The future of the relation

The case of Catalonia’s independence struggle illustrates the extent to which China has become an essential part of European political discussions, even in cases that are not directly related to the Asian giant.

For the Catalan pro-independence movement, Europe remains its primary geopolitical space of interest. Nevertheless, in the view of some Catalans, in supporting the legal position of the government in Madrid the EU ignores what two million of Catalan people perceive as a violation of their essential rights. This may cause some groups in the pro-independence movement to search for allies beyond the continent. This could hypothetically make a case for a pragmatic move closer to China.

However, as seen throughout the article, there is not much sympathy from the Catalan side to the Chinese government. Neither Beijing has shown any sight of sympathy towards Catalan independence. The context in Catalonia is different from the one that China found in South Sudan, Catalan independence is not a reality. Only in an scenario, in which Catalan separatism is able to reach its goals, tacit agreements with Beijing might be reached on economic grounds. On the political dimension, Catalonia remains too far away from China’s main geographic area of interest, and independence is a too sensible issue for Beijing to expect any move from China that would imply diplomatic recognition.

Miquel Vila Moreno is an international relations analyst with focus on China geopolitics.  He is a contributor to different media in English, Catalan and Spanish language. He has lived in Beijing and has earned a MA in International Security from the University of Groningen and a master’s degree in Chinese Studies from Pompeu Fabra’s University.