China in the Middle East: A ‘Quiet Strategy’ of Balancing

Home Blog China in the Middle East: A ‘Quiet Strategy’ of Balancing

If China were to become a new active leader in the Middle East it would have to be willing to, first, bear the costs, and, second, adopt a more complex global leadership strategy. 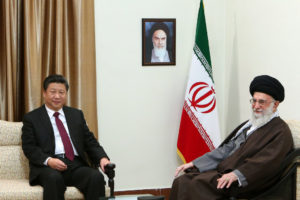 In January 2016, China issued its first official Arab policy paper outlining the guiding principles and development of China-Arab relations. This became a focal point of the discussion about China’s possible new strategy towards the Middle East, a region traditionally perceived to be under the influence of the United Sates (US). However, after the reduced presence of the US in the region and its effort to shift its economic power to the ‘Far East’ under Obama’s ‘Pivot to Asia’, the Middle East not only experienced a growing security vacuum, but a number of countries started to look eastwards, too, in search for stronger cooperation.

As the  aforementioned policy paper outlines, China’s approach in the Middle East focuses on the establishment of a new type of relations based on ‘win-win cooperation’[1] while upholding the Five Principles of Peaceful Coexistence:[2] respect for sovereignty and territorial integrity, non-aggression and non-interference into other’s internal affairs, equality and mutual benefits, and peaceful coexistence. The principle of non-interference, however, is the one that would cause China most problems if it were to play a stabilizing role in the region’s politics and security. Such predictions have been made for a number of years, and even though China’s presence in the region has been increasing (for example, China is deploying its special operation forces to Syria, as reported in late 2017, and established its first overseas military base in Djibouti in the same year), it has been successful in maintaining the appearance of a low-profile country.

If China were to become a new active leader in the Middle East it would have to be willing to, first, bear the costs, and, second, adopt a more complex global leadership strategy. It remains currently unclear whether China is considering this scenario. The complexity of the region would provide China with a number of challenges, most importantly, how to balance between maintaining its principle of non-interference and adopting a new principle capable of maintaining its legitimacy across the region. In this case, China would benefit more from continuing to play according to its traditional rules: remain neutral, promote stability and refrain from direct interference.

The role of the Middle East in China-Middle East relations has traditionally focused on its importance to China’s energy security. ‘‘China delicately maintains the balance between opposite states (Israel-Palestine, Iran-Saudi Arabia) and makes effort to develop its friendships with conflicting countries. In the Middle East, National Interests are more important than the so-called ideology and alignment.’’, Prof. Wang points out.

However, no major economic engagement comes without political considerations. Looking at the Middle East in light of recent conflicts, the region is again divided and in the state of a new ’Cold War’, words traditionally used to describe animosity between the region’s two biggest rivals: Iran and Saudi Arabia. Both Saudi Arabia ($44 billion) and Iran ($22.5 billion) are major partners when it comes to Chinese trade in the Gulf.[3] Nonetheless, if tensions between the two rivals continue to escalate, China will have to face an important decision. On one hand, it can continue on a path which is more akin to its ‘quiet presence’ in the Middle East and play its traditional role of balancer between the two countries, or, on the other hand, it can dedicate its resources and support for more defined goals while picking a side in the conflict. Given that China’s policy in the Arab world is based on defense, rather than aggression, it is very unlikely that China would pick a side in an open conflict. Despite Iran being a more valuable partner for China than KSA, (especially because of its hostile relations with the US) China has to, in the first place, maintain stability, and, second, to preserve security and favorable circumstances for the development of its Belt and Road Initiative (BRI). The massive investments and the importance of the Initiative to Beijing’s neighborhood diplomacy will mitigate any possibility of Chinese support for any kind of open conflict in the region. At the same time, there are the issues of Islamic extremism and Saudi-funded madrassas (Islamic schools), which in Chinese views have become a major threat to China’s territorial integrity, especially in its northwestern autonomous region of Xinjiang. While the issues are greatly important to Beijing, they push China to seek cooperation and consensus with Saudi Arabia, rather than to completely alienate itself from it.

Analyzing China’s current relationship with Middle Eastern countries, China appears to be willing to play the role of a balancing power, especially in terms of development and economic support, yet it refrains from stepping in the major ideological and historical conflicts between these countries. This is not only because of its strategic interest in the region (BRI, containment of Islamic extremism), but also because of its fundamental principles of peaceful diplomacy. In short, China is trying to be the good guy who is friend with everyone in the region, as long as they are willing to cooperate, to maintain stability, and to do business together. These multilateral friendships provide China with the possibility to play a balancing power, as in the case of Israel and Palestine, where President Xi pledges to make ’unremitting’ efforts[4] toward promoting peace. According to Prof. Wang, ‘‘China firmly supports the two-state solution and the peace process, at the same time, China also respects the US unique role on the Israeli-Palestinian peace talks, and has no intention to replace American position.’’ While it is clear that China seeks cooperation with the US to maintain stability in the region, ‘‘China has no appetite to end American dominance over the Middle East, that is why American key allies become close to China in the recent years’’, Prof. Wang expounds.

Nonetheless, even though for the time being everyone seems to benefit from China’s presence, problems can surge once China’s increasing military imprint in the Middle East starts to be perceived as a threat by any other major country in the region. In that case, China will have to come up with a new code of conduct — one that considers confrontation as a contingency. Until then, we can continue to observe China unfolding its current ‘quiet strategy’. Whether China will succeed in the world’s most tumultuous region of the 21st century is yet to be seen.

The author would like to express her sincere gratitude to Professor Wang Suolao for his gracious cooperation and insightful comments.