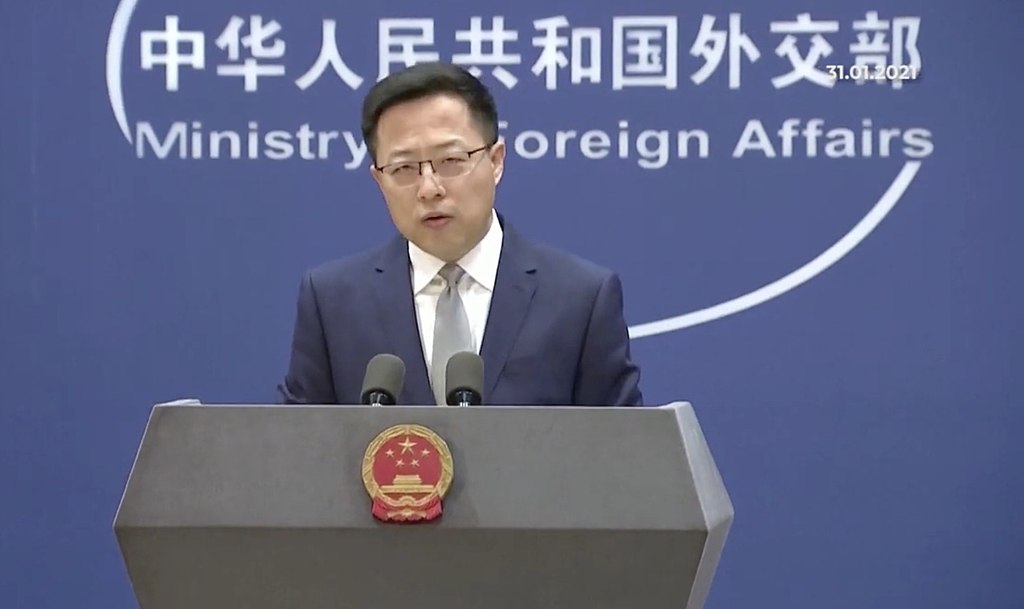 In July this year, Taiwan and Lithuania announced the decision to open diplomatic missions. Taiwan Foreign Minister Joseph Wu noted that the new representative office will be the country’s first in Europe to include ‘Taiwan’ in its official name. Following the announcement, a spokesperson of the Chinese Foreign Ministry commented that Lithuania’s decision to open a representative office under the name of Taiwan “brazenly violates the spirit of the communiqué on the establishment of diplomatic relations between China and Lithuania and severely undermines China’s sovereignty and territorial integrity.”

Indeed, in the CCP’s eyes, the representative office in Lithuania would break a very important ‘diplomatic rule’. It is related to the so-called ‘one China’ principle, according to which Taiwan is part of China’s territory. In line with the principle, if the host country has diplomatic relations with Beijing, Taiwan’s foreign missions’ names usually feature ‘Taipei’, likely to avoid sovereignty implications. This is also the standard case of Taiwan’s representative offices established with 17 EU member states.

Beijing warned Lithuania that “there is only one China in the world and the People’s Republic of China is the sole legal government representing the whole of China.” Next, China recalled its ambassador to Lithuania and called on the Baltic state to withdraw its own diplomatic counterpart. Lithuania’s decision that challenges the China-self-imposed diplomatic ‘norm’ alongside an overall shift away from China resulted in a diplomatic impasse between the two countries.

Global Times, an English-language daily tabloid newspaper under the auspices of the Chinese Communist Party known for its jingoistic editorials published on the topic several articles full of mockery and calls for retaliation. At a closer look, they follow a well-known pattern of a narrative used by China to justify the Party’s hurt ego.

What is behind Lithuania’s “reckless behavior”?

Global Times pointed out that the internal factor of Lithuania’s “anti-China crusade” is its ruling party transition. Lithuania’s center-right ruling coalition, the Homeland Union-Lithuanian Christian Democrats, came to power in October 2020 promoting a values-based foreign policy. Even though the ruling party orientation is an important element determining Lithuania’s geopolitical orientation, its foreign policy shift away from China has been a gradual process.

In 2019, Lithuanians held a rally for Hong Kong protesters, to which Beijing’s embassy to Lithuania gathered Chinese nationals in the country for a counter-demonstration. Negative sentiments evoked China in the Baltic country when a Chinese tourist removed a memorial to Hong Kong protesters at Lithuania’s Hill of Crosses, a national symbol of resistance to Soviet rule. China not only had conflicts with Lithuania on matters of political ideology, but it also acquired a bad reputation when it comes to security. In 2020, a data leak revealed a Chinese company had been gathering information on more than 500 prominent Lithuanian citizens.

Lithuania’s experience gradually reflected on the policy level of the country. In the past year, Lithuania pulled out of Beijing’s ‘17+1’ cooperation platform with Central and Eastern Europe, joined 13 countries to release a joint statement that questioned the WHO-convened COVID-19 origins study, accused China of not being transparent, and called for another investigation. As if it was not enough for Beijing, the Lithuanian parliament passed a motion condemning China for genocide against Uygur Muslims.

On the other hand, while distancing itself from China, Lithuania warmed up its relations with Taiwan. In 2020, about 200 Lithuanian politicians and public figures in an open letter to Lithuanian President Gitanas Nauseda called for support of Taiwan’s participation in the WHO. Although Nauseda did not act, the foreign minister openly supported Taiwan’s bid for observer status in the World Health Assembly.

“The role of Taiwan authorities cannot be neglected either. […] Politics must have been involved as Lithuania played anti-China tricks while at the same time strengthen anti-pandemic ‘cooperation’.” Chinese media refer to Lithuania’s intention to donate 20,000 COVID-19 vaccine doses to Taiwan announced in July this year. These are meant to return the favor of 100,000 surgical masks that Taiwan donated last year to the Baltic country to take on the pandemic. Finally, in March, Lithuania said it would open a trade representative office in Taiwan, and with the support of some pro-Taiwan politicians and scholars established the Lithuania-Taiwan Forum to promote relations with Taiwan.

Blindly following the U.S. does not solve domestic problems

Generally, a country’s behavior towards China is determined to a great extent by its domestic political situation, and typically, the countries having problems with China are Western democracies. When justifying their ‘wrongdoings’, Beijing uses the very same old discourse targeting these two characteristics — ‘Western values’ are considered by the CCP ideology ‘hostile and harmful’. Their main source is traditionally the U.S.

This narrative is used to explain Lithuania’s foreign policy divergence as seen in an article claiming that “the Biden administration has exerted influence on the small country. As a result, Lithuania has been capricious in its foreign policy.”

Given the geopolitical competition between China and the U.S. — representing authoritarian against liberal respectively, a democratic country’s action against China is easily interpreted by Beijing as proof of alliance with Washington. “Chinese experts pointed out that this small country’s strategy is to woo and follow the U.S. and be a ‘loyal puppet’ that barks the fiercest at the U.S.’ strategic rivals in exchange for protection.” Similar ideas are pushed in statements, such as “the strategy of this small country is to cling to the U.S. as tightly as possible. It is a U.S. running dog that barks most fiercely at the strategic rivals of the U.S. in exchange for its protection.”

Relying on the U.S. is always portrayed as a foolish decision, such as in an opinion article titled “Lithuania cannot count on the U.S. much when it comes to internal governance.” Washington only “tends to provide verbal support, security illusions and empty promises to rope in countries like Lithuania.” Similarly, its harmful influence results in an ineffective model of governance that can be easily proved by looking at Lithuania’s domestic turmoil. Such an example is the violent anti-vaccine protest in front of the Lithuanian parliament after the country announced its plan to impose a vaccine passport to access public places. “The chaos reflects the lack of governance ability and political stability of the Lithuanian government. […] The government of Lithuania is not dominated by any single political party. Under such a political structure, the government may not be efficient and determined enough to deal with protests or other social chaos.”

Since the liberal perspective is usually used to criticize China’s violation of human rights, Beijing often counterattacks employing the ‘double standards’ narrative. The use of tear gas during the protest after Lithuanian President Nausėda’s criticism of Russia’s violent riot suppression served this purpose well. “The Lithuanian government has followed the U.S. in political issues and ideology, which has led to the double standards in response to its own domestic challenges.” The article follows by questioning the ability of the Lithuanian government to deal with the situation that is portrayed as “a severe test for Lithuania”, and pushes the idea of the country’s over-reliance on Washington. “Considering that Washington may not offer any substantial help, how the messy situation will develop depends on whether the Lithuanian government will have enough ability to deal with it.”

In conclusion, the Global Times piece suggests Lithuania better focus on improving its own governance capabilities and stabilizing the domestic political situation, instead of provoking big countries. “Lithuania must realize that blindly following the U.S. will neither help calm the chaotic demonstrations in the country, nor help it gain a proper position in the international community.” Lecturing Lithuania, portraying it as a country in turmoil that needs to realize its mistake, and blaming the U.S. for being the main perpetrator is an effective way how to justify Vilnius’ cooling attitude.

Lithuania ought to be punished

Challenging China’s core interests and sovereignty is generally regarded with much gravity by Beijing authorities. CCP-backed Global Times published an opinion article with a headline that says: “Lithuania will pay the price for making radical moves on the Taiwan question”. The article authored by the editor-in-chief of the tabloid newspaper calls Lithuania “a crazy, tiny country full of geopolitical fears.” The op-ed also claims that the way Lithuania acts “is not the way to be a normal country,” and concludes with a very common Chinese narrative: “‘Good and evil will always be rewarded; it is only a matter of time.’ I believe that Lithuania will eventually pay the price for its evil deed of breaking international rules.”

One specific way of punishing Lithuania is suggested in another article by Global Times. The country is labeled as “the most anti-Russia country in Europe,” and for this reason “perhaps it has become used to a provocative foreign policy and turned its anti-Russia impulse to China.” For having touched “the most salient geopolitical redline in the entire western Pacific” the article suggests that “China and Russia should take proper opportunities to strike against a country that has lost its mind. This should be the new content and guidance for China-Russia strategic cooperation.”

So far, China’s countermeasure against the country has been the recall of its ambassador to Lithuania. Chinese media quoted experts that called it a “serious” and “rarely seen” move. The experts also warned that “the possibility of a ‘diplomatic relations cut-off’ cannot be ruled out if the Lithuanian government fails to correct its mistakes on the Taiwan question.”

This might prove difficult even though not impossible judging from past experiences of China’s interference in Taiwan’s relations. However, until now, Lithuania’s decision got enough international support. The EU spokesperson for Foreign Affairs and Security Policy, Nabila Massrali, commented that a Taiwan representative office in a member state isn’t regarded as a breach of the EU’s ‘one China’ policy. The U.S. Department of State spokesperson Ned Price on the other hand stated support to Lithuania by claiming that every country should be able to determine its own ‘one China’ policy. Meaningful is also a joint statement to condemn China’s political, diplomatic, and economic pressure on Lithuania that was issued by 13 chairs of foreign affairs committees from 11 European legislatures supported by Chairman of the U.S. Senate Foreign Relations Committee Bob Menendez. This follows the call of The Formosa Group to the EU and NATO to show solidarity with Lithuania and support its decision to expand its ties with Taiwan.

Given the overall changing atmosphere in the EU towards China, Beijing authorities know Lithuania’s case represents a serious challenge. Vilnius’ move is even regarded more seriously than the Czech Senate Speaker Miloš Vystrčil’s visit to Taiwan in August 2020. For this reason, the urgency in Beijing is not to let other countries follow Lithuania’s example, and warn Taiwan that ‘secessionist’ actions can trigger serious consequences. “The Taiwan question cannot be used as a bargaining chip. It is a high voltage line, even a watershed between peace and war.” But maybe Beijing oversaw two important details — that Lithuania seems not to be willing to bargain with China anymore, and that a diplomatic office representing ‘Taiwan’ does not claim any right to represent ‘China’.