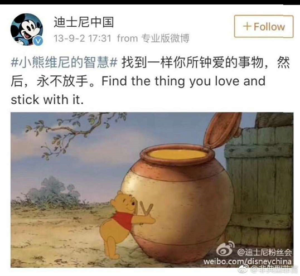 Even the mighty Chinese internet censorship apparatus is not all-powerful, so one could still get a picture of the Chinese netizens’ uncensored reactions. These reveal shock, disappointment, outright opposition, humorous takes but also sincere support for the constitutional changes that will potentially allow Xi Jinping to keep in power for the rest of his life.

After consolidating his power at the 19th CCP National Congress last autumn and authoring new addition to the Party canon that carries his name, Xi Jinping has not let the world guess too long about his political future. The recent announcement about proposed changes to China’s constitution includes removing the two term limit for President and Vice President. This proposal is virtually guaranteed to be passed next month by China’s rubber stamp parliament. Owing to his elimination of rivals and promotion of supporters throughout the party and military, iron hand control of the anti-corruption campaign and burnishing of his personal image, Xi has already become the most powerful leader in China since Deng Xiaoping and arguably Mao Zedong. For this reasons, many have expected that Xi would try to remain in reigns of Chinese politics even after his expected retirement in 2022/2023. This view was supported when Xi did not appoint any potential successor to the new Politburo Standing Committee at autumn’s Congress. Now, it is clear that Xi wants to stay on in an official position and not just as the power broker in the background as was the role of Deng. Still, the position of President is the weakest of the three roles that Xi concurrently holds so it will be interesting what power managements will be made in the following years to prepare for the new status quo after 2022. What is clear is that the upcoming constitutional change means direct break with the political arrangements that have been put in practice by Deng to limit the power of any individual within the system and ensure collective leadership after the disastrous experience of the Mao era.

The news of constitutional change have created a wave of public discussion. Internet censors have had to put in extra hours to manage the vivid discussion. Most of the comment sections under official news accounts were soon closed and Weibo posts about the constitutional change censored. The same happened on other social media like WeChat. The ever resourceful netizens have tried to find workarounds around the censorship by posting screenshots of the news rather than the sensitive words or using stand-ins. Nevertheless, most of these have eventually met the same fate. What discussions remained online were only a showcase of almost identical posts expressing support for the constitutional change. However, even the mighty Chinese internet censorship apparatus is not all-powerful, so one could still get a picture of the Chinese netizens’ uncensored reactions. These reveal shock, disappointment, outright opposition, humorous takes but also sincere support for the constitutional changes that will potentially allow Xi Jinping to keep in power for the rest of his life.

One of the most repeated comments on Weibo was that the change of constitution means witnessing history in real time. This shows that netizens are very well aware of the significance of the change. But as one user commented, this may not be witnessing history as much as repeating it. For many users, scrapping of constitutional limits is a step back for China, and deem it “scary”. One comment asked if China is again beginning with the cult of personality that has been shown as false by history. Others have quipped that the Qing dynasty has returned and China has a new emperor now. Ironically proving the point of this commentaries, all the search queries on Weibo containing “new emperor”, “new dynasty” and other related words were censored, citing “relevant laws”. Interestingly, searching for Yuan Shikai, the Chinese warlord who tried to declare himself a new emperor after the fall of the Qing Dynasty in 1916 were blocked as well. Looking at the bright side of the situation, one user asked if China will now have also royal celebration day (王庆节) on top of the current national celebration day (国庆节) so that he/she could enjoy more holidays.

Many users have expressed disapproval with the strict control of debate over the constitutional change. Some netizens posted notifications from Weibo about removal of their posts on the issue, complaining that their voice on such a major issue cannot be heard. There was an apparent sense of frustration with the inability of Chinese people to in any way affect big decisions that will change their future. This has of course been true for a long time, but a significant event like this has fully uncovered the insignificance of Chinese people’s voice. One of the comment complained that the media reports about universal popular support for the constitutional change apparently gloss over the dissenting Chinese. One poster compared China’s constitution to a toilet paper, with many others expressing disbelief over how easily the laws can be changed to accommodate the interests of those in power. Another user expressed his anger that the hardly learnt lessons about one man rule will be carelessly thrown aside. Yet another netizen observed that power really can get into people’s head. North Korea was often invoked, with comments about China becoming just as the country of “the fatty next door” （马上就跟隔壁胖一个样子）.Netizens also compared Xi’s action to the Putin-Medvedev situation in Russia.

Some of the commentary reveals that netizens see the proposed change as but a last in the string of worrying signs. One netizen argued that the party has been challenging the bottom line of the Chinese people so that they have slowly become numb to it and accepted it (接连发生的是感觉就是把我们的底线一再往后推，推着推着也就麻木了). This user said that she feels like as long as the Chinese people have their basic needs fulfilled, they don’t care about anything else. In a similar vein, another uses warned that with these incremental changes that people don’t some to care about, there may come a day where this will get too far and people will realize where it all started.

Naturally, not all the commentary was negative. For many netizens, changing the constitution does not matter as long as China is going on the right path and becoming strong and powerful and people’s livelihood is getting better.  As argued by some, having such a capable leader as Xi around for a longer time is actually not a bad thing. One user argued that giving more time for Xi’s policies to take effect is a good idea, pointing out that the current term limit might be too short to actually do something. Another user argued that there is still need for more reforms, continuing fight with corruption and Xi needs to stay in reign. Netizens recon that there must be some “big things” that Xi needs to finish and doesn’t want to leave for his successors unsolved. One such an issue according to the comments might be the “return”of Taiwan to China, which may be possible during the Xi’s now extended rule.  One last line of reasoning frequent among the users is not a novel one: the Party knows best and they resolutely support it.

As always, humor remains the best weapon when there are no other options. Some netizens complained that they have always been groomed by socialist education to “take  over the shift” of leading the country in the future but now their dreams have been shattered. The particularly popular, and accordingly heavily banned mentions, were that about Winnie the Pooh. This seemingly innocent cartoon character is used to stand for Xi Jinping himself. One of the reposted images depicts Winnie the Pooh’s coronation with a caption – In this golden era, if you want to take throne, the constitution does not exist. Another shows Winnie the Pooh with a huge jar of honey, which we can only assume, stands for the insatiable hunger for power. Still, most of the posters were aware that their posts will not stay on too long, with many jokingly expecting someone to come check their water meter- an euphemism for a police visit (查水表).