Digital crimes in South Korea and their effect on feminism 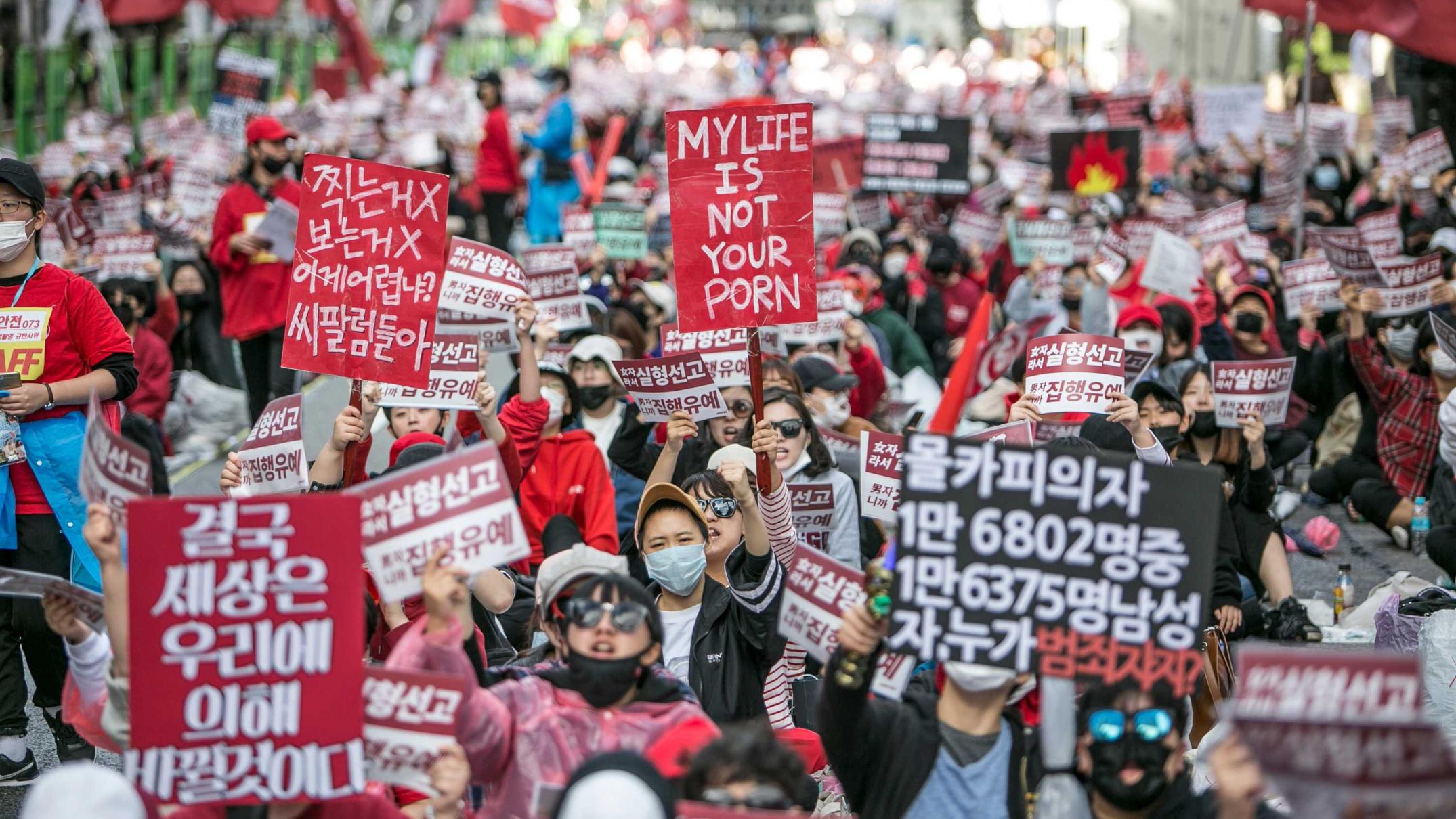 The rise in awareness of digital sex crimes in South Korea may be the much-needed spark that the already existing and rising South Korean feminist movement needs to make a significant difference in the safety of women in the country.

The digitalization of the world may have its benefits, but it also opens new ways for criminal offenses such as sex crimes. South Korea, which has become a technological powerhouse and key player in the technology sector, is no exception to this. For instance, some of the most recent scandals involving digital sex crimes there include an 11-year old girl who was blackmailed into taking sexually explicit pictures of her body. This was followed by controversial cases of chat rooms, in which men paid thousands of dollars to watch sexually explicit content of women and young girls who were pressured or abused to provide it.

In these cases, the number of victims has reached more than 100 women in various age groups including 26 teenagers. After the most recent case surfaced last year, more than 7000 group chats have been banned on account of sexual violence and abuse of minors, while at least 2500 people have been detained for participating in digital sex crimes, with around 220 people arrested solely in 2020.

Besides this, South Korea also has a history of persistent problems with spy cams, which are cameras hidden in various rooms ranging from hotel rooms to changing rooms in hospitals or other workplaces. This also includes leaked sex tapes either in private chat rooms or publicly on the internet.

All this shows an ongoing pandemic of digital sex crimes in the country. Indeed, the Korean Institute of Criminology confirmed that the illegal filming of victims has risen eleven-fold between 2008 and 2017. Moreover, according to the Human Rights Watch, a global advocacy group, such crimes in South Korea were not treated seriously meaning that 43.5% of digital sex crimes and 46.8% of sex crimes were dropped by prosecutors in 2019, compared with 27.7% of homicide cases or 19% of robbery cases.

Besides those in digital space, other types of sex crimes are also very prevalent in society but are not treated seriously enough, most likely due to issues around gender equality. Sexual harassment is still very present even after a strong #MeToo movement emerged in South Korea. Even though the movement has led to a rise in the number of reports of sexual harassment, 38 cases received “de facto remedy” out of a total of 173 complaint cases on sexual harassment in 2016. The reason why sex crimes against women are still not being treated seriously may be the fact that South Korea is still a Confucian and patriarchal society which creates a challenging environment for women to voice their opinions or complaints.

To illustrate this issue, in 2016, a man who attacked a woman in public toilets claimed that while the woman was indeed a stranger to him, he did it because he felt a “deep resentment” towards all women. Yet, the case was classified as driven only by mental illness rather than a misogynist hate crime. Such instances together with the lack of proper investigation and punishment of the perpetrators have in recent years sparked public unrest and digital protests which have resulted in heated debates over feminism.

Indeed feminism and surrounding activism in South Korea has intensified in recent years. Although South Korea was and still is low on the Global Gender Gap Index – specifically 102th out of 156 countries in 2021 and not moving above 100 for the past decade – the perception of women is slowly changing especially in the globalized young generation. Because South Korea was involved in military and political conflicts in the region for the majority of the 20th century, women’s rights did not get enough attention until the end of the 20th century after the democratization of the country. But despite the 1987 Equal Employment Act and 1989 Act on Equal Employment and Support for Work-Family Reconciliation, which focused on equal work opportunities, wages, and promotions, South Korea ranked  123th out of 153 countries in 2021, according to the Global Gender Gap index on economic participation and opportunity.

However, the #MeToo movement and a slight change in the portrayal of women in the media indicate that the perception of women may be slowly changing, and the space for discussion on women’s rights is opening. To support that, during the 2020 parliamentary elections, the first feminist political party Women´s Party (Yeiseong-uidang) was formed in South Korea while a record number of women were elected into the parliament.

Yet women still occupy only about 17% of seats, which is below the global average, and the Women´s Party was not able to get a seat despite gaining more than 200 000 votes. Moreover, 90% of women who won constituency seats were from the Seoul metropolitan area, which is suggesting even greater regional gender inequality with only 3 females winning seats outside of the metropolitan area. Even though both the ruling and opposition parties suggested that they would name 30% of their candidates for assembly constituencies women, it has never ended up happening. In addition, the members of the Women’s Party have received numerous death threats for being feminists. Therefore, despite some positive changes, significant improvements connected to the way women are treated in South Korea are needed. So how do digital sex crimes fit into this?

Digital sex crimes seem to be the last drop that sparked meaningful protests in the streets and generated legislative changes. After the surfacing of scandals around spycams in 2018, people went to the streets with slogans such as “my life is not your porn”, expressing their frustration over the increase of digital sex crimes as well as treatment of women. These protests were often referred to as another feminist movement joining the #MeToo. However, the difference between other feminist activities in South Korea and public reaction towards recent scandals is that the public outrage over digital sex crimes led to significant legislative changes which can increase the safety of women not only on the internet but also in public or private space.

One of the laws that have been changed had previously considered minors between the ages 13-16 as consenting parties to sexual abuse if they received some benefit, for instance, money. In this way, perpetrators could be not convinced of rape or sexual abuse. Simultaneously, the underage victims of sexual crimes could be sent to juveniles so they were also punished for the crime despite being the victim. But now, all minors are seen as victims, and the age of consent was changed to 16 years. Furthermore, even if the perpetrators were punished for the distribution and production of sexually explicit material of minors, the average sentence was only 2.6 years. But people behind the recent case of chat rooms were the first ones to receive heavy punishments in the form of 40 years in prison which is a significant change from the past. In addition, out of 1849 cases of digital sex crimes that went on trial, 1837 ended with a conviction.

This suggests that digital sex crimes are now taken more seriously, leading to stricter punishments as well as possibly changing-approach towards wider safety of women and their position in South Korea. However, whether are digital sex crimes treated reasonably enough is still questionable. According to Human Rights Watch, several steps need to be taken to decrease the digital sex crimes and the responsible authorities such as the Government, National Assembly, Ministry of Education, and National Police Agency, Supreme Prosecutor’s Office and Supreme Court should take appropriate measures. Still, the changes that have already happened are also a product of the activity of the South Korean feminist movement.