How Myanmar state-run media shaped public opinion on the ‎Rohingya‎ 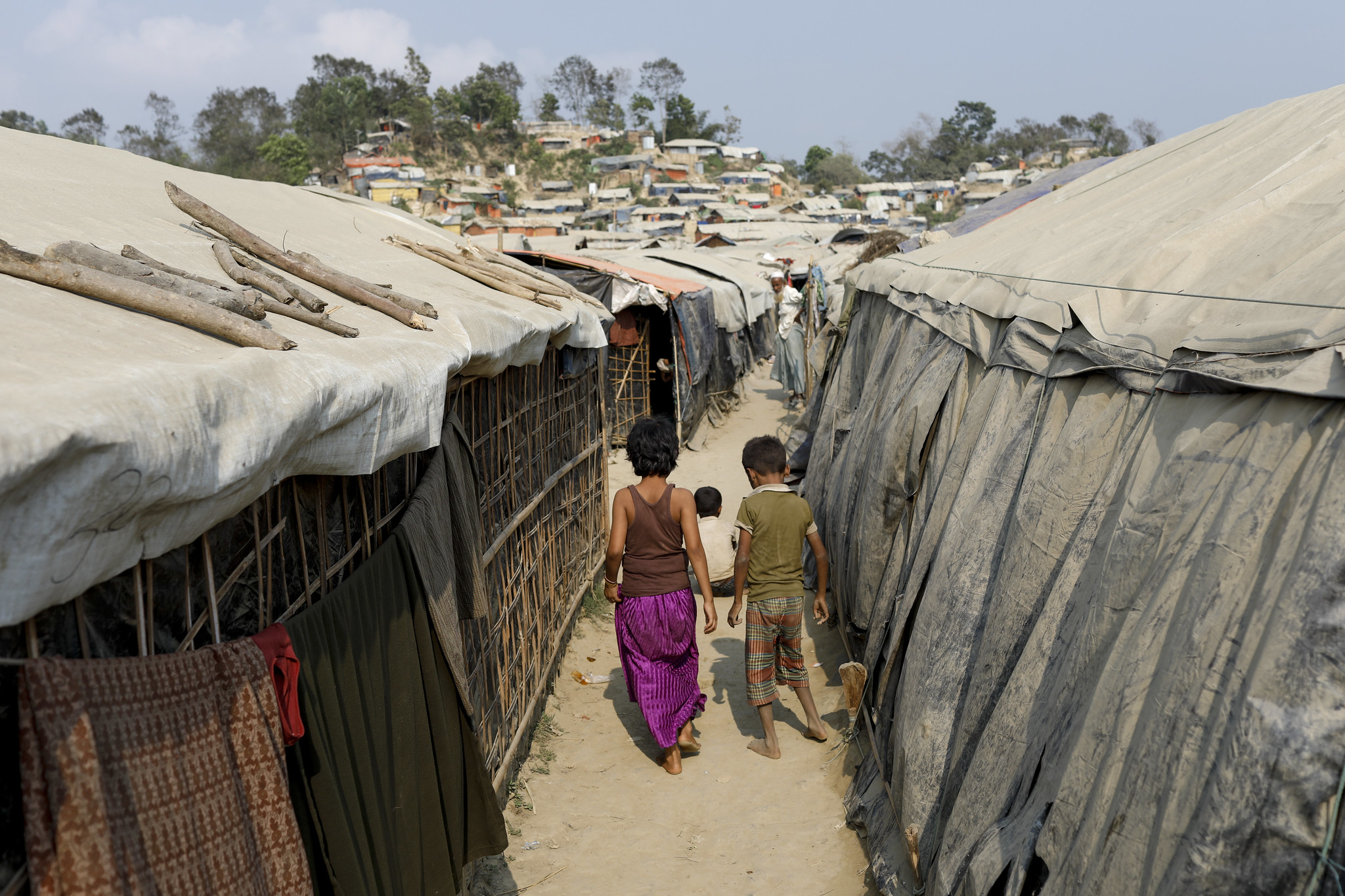 Under the authority of the Tatmadaw, Myanmar’s military, the Rohingya have long been subjected to discrimination and segregation in systemic attacks linked to their identity. The year 2017, however, went into Myanmar’s history as annus horribilis. The Myanmar security forces launched a series of attacks resulting in nearly a million Rohingya refugees fleeing to camps in Bangladesh.

Today, the Rohingya are still there, living in desperate conditions, and after the February military coup against the civilian government with even less hope of returning home. Although there is much evidence, there has so far been no accountability for the genocide committed on the Rohingya people; the Myanmar security forces benefitted from near-total impunity.

While the international community sees the Rohingya as innocent people who just want to call themselves a certain name and who are then abused for it, to most people in Myanmar, they are illegal immigrants from Bangladesh who are permanently residing in the Rakhine State.

How is it possible that the other people of Myanmar – people who for several decades endured hardship in a brutal dictatorship – are turning a blind eye towards the dire situation of the Rohingya?

People’s perceptions are heavily influenced by what they see, hear and read (especially if those are frequently repeated). Ideas and words produced by politicians, the media, religious leaders, and even friends and family members shape these perceptions.

Influential Myanmar monks and army officers were spreading hateful, exclusionary images and commentaries on social media representing Islam as a threat to Buddhism, ‘traditional values’ and national security. On top of that, in countries such as Myanmar, where the Internet penetration is not high, hate speech continues to be spread also via print media.

Aung San Suu Kyi, the de facto leader of the country, advised the Myanmar people to follow government-owned media for reporting on the military operations. With this, she contributed to the shaping of people’s (negative) perceptions of the Rohingya (thereby contradicting her government’s top priority, national reconciliation). Moreover, there has been a crackdown on media freedom and on journalists who seek to report on the Rohingya situation fairly. Courageous investigative journalists have been sent to prison or had to leave the country.

In Myanmar, there are five state-run daily newspapers, this article focuses on two of them. Myanma Alinn is the main government propaganda daily newspaper, also the longest-running newspaper in circulation in the country. It is read by people from the middle to upper classes, mostly older and educated people. The Global New Light of Myanmar (GNLM) is Myanmar’s English-language propaganda newspaper with many government announcements that caters mostly to the foreign staff working at the embassies, international organizations, and companies in Myanmar, but with very similar content to Myanma Alinn.

Comparing two of these newspapers, the English-language GNLM with the most popular Myanmar-language daily paper, Myanma Alinn, many similarities are found. Both depict the Rohingya as a homogenous, active group of perpetrators who are threatening national stability. For example, the GNLM has likened the Rohingya to ‘detestable human fleas’ (26 November 2016) and suggested as a solution that, ‘the thorn has to be removed as it pierces’ (31 October 2016). The same appeared also in Myanma Alinn newspaper (30 October 2016).

Analyzing these newspapers further, one can see that the GNLM limits the use of the ethnic group’s name Rohingya to a minimum, while the Myanmar Alinn does not use it at all for its Myanmar audiences. Instead, both newspapers refer to the Rakhine Muslim people as Bengali, or by using the abbreviation ARSA (explained below). While the term Bengali implies that the people migrated from Bangladesh into Rakhine State, Rohingya suggests that they have equal status as one of Myanmar’s ‘national races’.

In the context of Myanmar’s state-society relations, the term ‘ethnic group’ refers to any ethnic group living in Myanmar, including the so-called foreign ethnic groups like the Chinese, Indians, or Bengali. On the other hand, the term ‘national race’ only refers to the eight ethnic groups – Bamar, Chin, Kachin, Kayah, Kayin, Mon, Rakhine, and Shan – officially recognized to be indigenous to the territory of Myanmar.

As for ARSA, the Arakan Rohingya Salvation Army, despite its lack of capacity, the group has been designated a dangerous terrorist group, and, with that, Muslims are framed as terrorists. Myanma Alinn’s reports about the situation in the Rakhine State (in the first months after the start of the brutal military campaign in August 2017) presented the Rakhine government officials and local inhabitants (not including the Muslim population fleeing to Bangladesh) as victims of ‘ARSA extremist Bengali terrorists’. ARSA itself claims that it is only fighting for the rights of the Rohingya people and is not linked to any terrorist groups. Both newspapers, if Myanma Alinn not much more, used the word ‘terror’ (in its various forms, such as terrorism, terrorists, terrorist-attack, etc.) with a similarly high frequency. Here, language plays an important role, and the power of repetition to change readers’ thoughts should not be underestimated. It is one of the very effective propaganda techniques applied to manipulate the public mind through the use of symbols and emotional language. It is based on simple, slow, and constant impregnation. It creates convictions through imperceptible influencing that is effective only by continuous repetition.

Genocide or a ‘return to normalcy’?

The reports in the state-run newspapers about the situation in the Rakhine State focused mostly on three issues:

In the aftermath of the attacks, the newspaper reported almost exclusively only about the ‘Rakhine issue’, ‘extremist terrorists’, and the international attention they have acquired (as if this had all along been the goal of the Rohingya people), along with criticizing the foreign media for their biased reporting and UN officials for outright lying. In October and November, the second and third months after the brutal attacks on 27 August 2017, reports focused more on a return to normality and ‘the truth behind the issue’, and in December they focused almost entirely on the rebuilding of Rakhine state.

These reports also reveal how the Rohingya have been framed as culpable for the violence against them and as a threat to national security. International documentation of the mass atrocities in Rakhine State has been framed as ‘fake news’ and a threat to national sovereignty and the aftermath of the atrocities, including Rohingya repatriation, has been framed as a ‘return to normalcy’. It also shows how the Rohingya have been denied their identity in state discourses. The government and most of the society have denied the Rohingya their name, yet they have continually persecuted them because of their name.

The anti-Rohingya public opinion is a direct result of the military’s mass propaganda campaign helped by state-run media, depicting Rohingya as ‘Islamicists’ and ‘illegal Bengali invaders’. The analyzed articles from the first four months after the brutal campaign against the Rohingya people in two Myanmar state-run newspapers – incompatible with the narrative outside Myanmar’s borders – distorted reality by spreading propaganda, conspiracy theories, and disinformation that legitimized the military’s action in the region. It used an ‘us versus them’ classification for the Rohingya and considered them an existential threat. The constant, repetitive, and excessive mention of words such as terror, terrorism, and terrorists were used to instill fear in the readers.

What comes after the military coup?

Three and a half years later, the Rohingya remain in Bangladesh, and their future after the February coup is more uncertain than ever. As for Myanmar media, private local media have been canceled by the military while state-run ones continue operating, but their influence these days is questionable – people used social media for sharing news about the atrocities the military is inflicting on its people.

Paradoxically, the coup brings opportunities for ethnic reconciliation in the country as people work together against the Tatmadaw since they know that otherwise, their fate will resemble that of the Rohingya.

Banners apologizing for the way people have treated the Rohingya, or that they believed military propaganda about them not being Myanmar people, can be seen in the protests in the streets of Yangon. In turn, the Rohingya are hoping that standing in solidarity with the people of Myanmar will help to put an end to the discrimination they are facing.

The article is based on a research paper by Kristína Kironská and Ni-Ni Peng, which can be accessed here.