K-POP as a global phenomenon. Why China fails to achieve similar success? 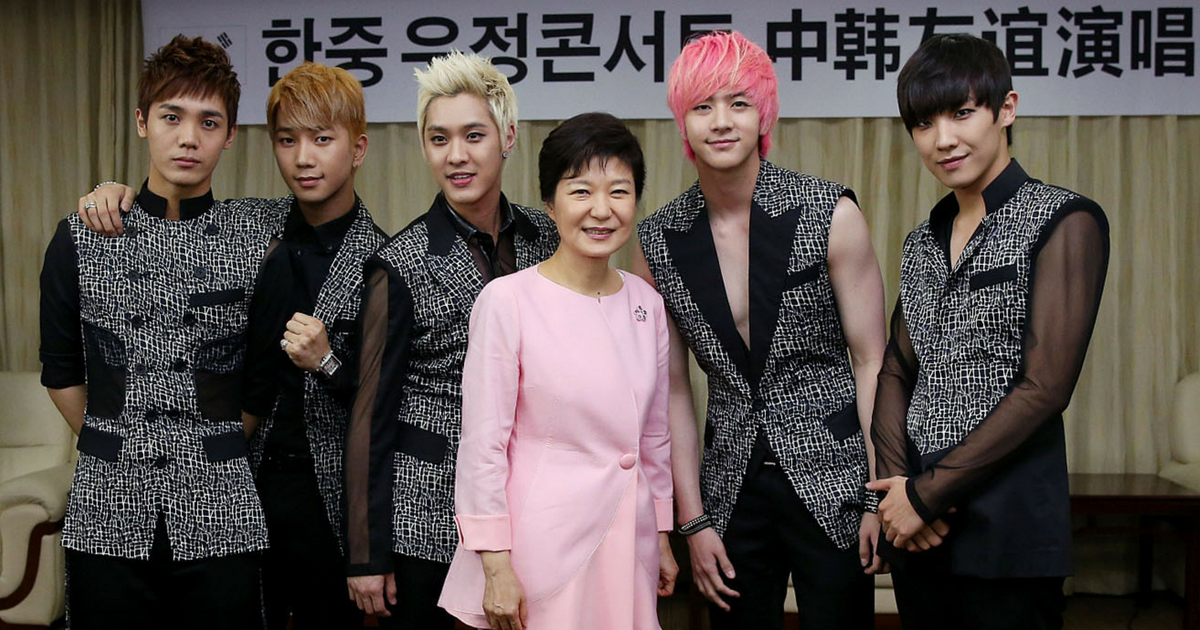 It has been six years since PSY’s hit Gangnam Style was released in 2012 and it almost immediately caught attention of the world, hitting one billion views on YouTube as the first video in history of the platform. Many other Korean artists were also gaining popularity outside of South Korea, including 2NE1, Super Junior, BigBang, SNSD (Girls’ Generation), BoA or HyunA, the star of PSY’s Gangnam Style music video and one of the most popular female solo artist in Korean Republic today. The global profiles of other South Korean groups like BTS, Wonder Girls or also BLACKPINK and TWICE, which belong among the youngest successful girl groups of contemporary K-pop, continue to rise. K-pop can be heard on the streets almost anywhere in South Korea and its success outside of Korean borders is quite a big deal.

The 1988 Summer Olympic Games in Seoul is often mentioned as the start of South Korea’s successful soft power push as it was followed by a rapid opening up of the country’s popular culture through K-pop, TV drama and film. Korean pop music began to gain popularity among Chinese during the 1990s when South Korean and China established diplomatic relations. Korean pop music and TV dramas were introduced via a radio program called Seoul Music Room broadcasted from Beijing. In 1997, over 150 million Chinese were watching Korean TV dramas and listening to Korean pop music through the program. Then, in 2000, a Korean boy band called H.O.T. held their concert in Beijing and from that moment, the K-pop fever started to spread across Asia. The so-called Hallyu (Korean Wave) soon landed in Japan and other East and Southeast Asian countries. The attractiveness of K-pop started to grow, reaching its highest point with the release of Gangnam Style, which swept the world in late 2012, and making it now, together with Korean dramas, movies, traditional culture, food as well as the Korean language or fashion, one of the most powerful tools of Seoul’s soft power.

The fact that South Korean soft power push has been quite successful can be proven by “Soft Power 30” ranking which has been released by Portland Communications since 2015. South Korea claimed its spot in the top 20 in 2015 and again in 2018. Contribution of the Hallyu phenomenon to that result has been considerable.

PSY’s success started the second Korean Wave and helped other South Korean artists with huge potential to catch attention of even wider audience. The rise of K-pop on the global stage after PSY’s tremendous comeback with Gangnam Style, which to this date reached over three billion views on YouTube, can be represented by other groups or solo artists as well, including SF9, Seventeen, K.A.R.D. or Korean female rapper CL, one of the ex-members of 2NE1. A good example is also a boyband called BTS which also performed their song Fake Love on The Ellen DeGeneres Show in May 2018 facing crowds of screaming (female) fans.

After BTS’ historic win at the Billboard Music Awards 2017, the group was engaged by the Korean Tourism Organisation to release a song to promote the South Korean capital city. It did not take too long and Seoul’s official website crashed under the weight of visitor traffic.

Tourism in South Korea also received a boost from the 2018 Pyeongchang Winter Olympics, which are also referred to as one of the better organised Olympic Games of recent times and perhaps South Korea’s greatest and most successful display of cultural and sport diplomacy. The world’s media has covered not only sporting stories but also many aspects of Korean culture, food and technology, leaving millions of people amazed. The South Korean government has vigorously promoted Korean popular culture, taking advantage of its growing popularity to enhance Korea’s international standing and national image, and it definitely paid off.

It is more than amazing for such a small country like South Korea, whose economic wealth in the 1960s was approximately on the same level as Ghana, that its music, cinematography or even traditional cultures attract so much attention outside of its borders and today, South Korea is one of the most successful culture and entrainment exporter in Asia. It does not look like the spreading Korean Wave should reach its end in the foreseeable future. Quite the opposite, the exportation of South Korean pop culture is very much supported by the government and it is more than well received abroad as the case of the United Arab Emirates, for instance, shows. Seoul has enticed greater relations via pop culture and economic ties between UAE and South Korea has been growing stronger.

Of course, the impact of South Korea’s culture industry depends on the place where it is received. Its popularity is growing in the Middle East as it is considered more conservative than Western pop-culture in the Arabic world. This is apparent in the language used as well as clothing and makeup styles. Even though K-pop fan bases are much larger and more noticeable in some Latin American countries and in East Asia than in Europe, where it still did not achieve mainstream status, we can expect that the Korean Wave won’t stop spreading and maybe we will be able to listen to K-pop in the European radio broadcasting in the future. After all, we could listen to Gangnam Style on many European radio stations for quite a long time in the past and it is just matter of time until Korean entraining industry seizes the attention of other European countries, not just France or the United Kingdom, where the European K-pop fanbase is concentrated.

What’s up with Chinese pop?

We can wonder if there will be any other Asian country which could achieve similar success in entertainment and culture exporting as South Korea or even Japan. Why Chinese entertainment industry is not as popular as Korean music or Japanese anime? Could China or maybe Taiwan make similar impact to that of South Korea?

Maybe “Chinese Wave” would be possible if the PRC changed its approach to creativity and freedom of expression. The huge potential of Chinese popular culture is suffering under tight one-party regime which keeps an eye on all the content produced. China’s infamous censorship and crackdowns on “inappropriate” content or taboo subjects can be one of the obstacles that the Chinese Communist Party needs to overcome to let Chinese pop music or TV dramas and films cross the borders of the state and spread across the globe similarly as K-pop. Censorship and deterioration in the creative quality are tightly linked. It could be beneficial for Chinese entertaining industry to let the artists express themselves freely and stop throttling the huge potential of Chinese language pop culture. It is known that South Korea and Japan are two of the few Asian countries that are classified as “full democracies”, so their media are not closely controlled, which leaves space for considerably higher amount of creativity.