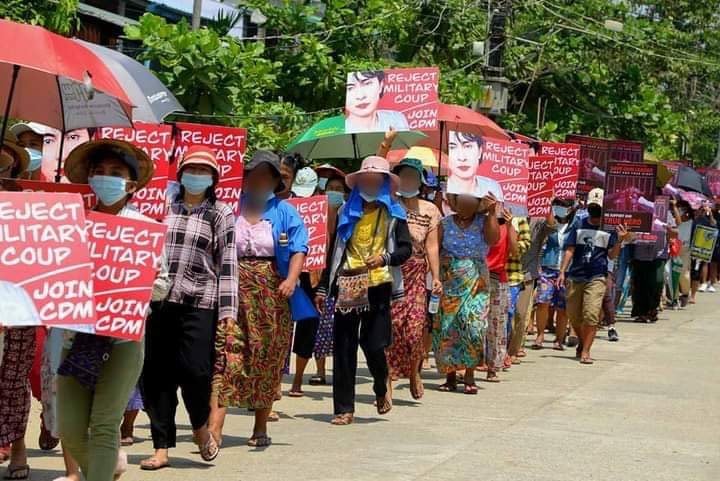 As the country’s crisis deepens, the lines between attack and defense are beginning to blur.

Observing the events unfolding in Myanmar on February 1 from my desk far away in Bratislava, I immediately texted a friend of mine in the country:

Since the military’s surprise seizure of power that morning in February, the extent of the protests and the sustained level of activism against the military junta have been unprecedented in the country’s modern history.

At first, the military’s response to the protests was restrained. But this has been followed by months of violence against (initially) peaceful protesters. These brutal crackdowns, starting in late February, have convinced many that only an armed response can topple the military. Initially, many hoped for foreign intervention that would help reverse the coup. This was never realistic, however, and it soon became clear to the Myanmar people that it wasn’t going to happen.

Myanmar’s people are perfectly capable of being the main actors of change themselves; they need support, not for foreigners to step in and save them. The best the outside world can do is to empower the protesters and use all available diplomatic tools to support their struggle.

Within a few days of the coup, health workers started what is now known as the Civil Disobedience Movement (CDM), which aimed to paralyze the machinery of state under the junta regime. They were soon joined by people working in the banking sector, transportation, education, and public administration, who refused to work under the military government and attempted to essentially make the country ungovernable.

Although largely leaderless, the CDM has proven to be very creative, borrowing from the past and inventing new ways of opposing the military: organizing traditional street demonstrations, staging silent protests, gluing pictures of the military chief onto the roads at night in order to slow the advance of tanks and armored personnel carriers; hanging women’s sarongs across streets to stop the advance of soldiers; and refusing to celebrate the Thingyan New Year. The CDM has also led boycotts of products that directly profit the military, including various brands of cigarettes, Myanmar Beer, and the mobile operator MyTel. There is even an app listing products and businesses for the people to boycott. For all these various efforts, the CDM as a whole has been nominated for this year’s Nobel Peace Prize.

At the same time, NLD lawmakers elected at the 2020 election formed a shadow parliament, the Committee Representing Pyidaungsu Hluttaw (CRPH), which subsequently constructed an interim cabinet, the National Unity Government (NUG). The NUG includes elected lawmakers, as well as members of ethnic minority organizations and other key figures from the anti-coup movement.

In early May, the NUG set up the People’s Defense Force, to protect civilians from the military and to form the nucleus of a future federal army, and is currently negotiating its unification with ethnic armed organizations and the many defense forces and civilian militias that have sprung up around the country since the coup. Building inter-ethnic solidarity and addressing grievances of non-Bamar minorities have become crucial components of opposition to the military regime.

Since the military’s takeover people have been calling for outside intervention, in the form of the Responsibility to Protect (R2P). However, a forceful intervention from the outside would cause Myanmar’s resistance movements to fragment or disintegrate entirely. In the current context, any external military intervention in Myanmar would greatly worsen the humanitarian crisis and is an option that should not be on the table.

That said, military intervention is only one of a host of tools that states can choose to deploy to halt ongoing atrocities under R2P. There are many other instruments that can and should be employed by  Myanmar’s neighbors, regional organizations, and major powers, as well as countries located farther away. These include, among other things, diplomatic rebukes by means of effective targeted financial sanctions on military officials and businesses, arms embargoes, diplomatic isolation, the invocation of universal jurisdiction, and the referral of the situation in Myanmar to the International Criminal Court in The Hague.

The CDM alone is unlikely to convince the military to give up power. The military’s proven ability to finance itself is unlikely to be hampered without concerted international action in the form of sanctions. Limiting the military’s access to foreign currency is a pressure point that could force a change to the junta’s political calculus.

In March and April, state-owned gemstone and timber companies, as well as the two giant military conglomerates, the Myanmar Economic Corporation (MEC) and Myanmar Economic Holdings Limited (MEHL), were sanctioned by the United States, the European Union, and a few other countries, but most governments are yet to follow suit.

Moreover, the list of potential sanctions targets has yet to be exhausted. There are much more profitable enterprises than the MEC and MEHL, chief among them the Myanma Oil and Gas Enterprise (MOGE), in which European and American companies hold shares, and which is directly controlled by the regime. By not imposing an embargo on MOGE and other companies linked to the military, European and American companies are practically co-financing the junta’s ongoing crimes against humanity.

International companies operating in Myanmar can also help to prevent money going into the hands of the military: They can withhold and refuse to pay tax and revenues to the generals on the grounds that these are perfectly illegitimate, being based on old agreements with the civilian regime. Freezing military-linked bank accounts and imposing an arms embargo could stop the generals from getting more weapons; the more money the military gets, the more people it is going to kill.

When it comes to diplomatic isolation, the Association of Southeast Asian Nations (ASEAN) has the potential to play a paramount role. Expelling Myanmar from its ranks, for instance, would have quite an impact on the generals. But the Southeast Asian bloc has made several mistakes from the onset of its hypocritical “peace facilitation effort” and can no longer be expected to bring a meaningful solution to the table.

The good news is that even countries that are geographically remote from Myanmar can play a significant role; every embargo and sanction counts. We live in a globalized world, one in which if Slovak people buy motor oil from French Total, which is working with MOGE, they are in a way sending money to the junta and increasing its ability to buy more arms.

The shadow parliament CRPH and interim NUG have been working fervently from their places of hiding to gain official recognition as the legitimate leaders of the country. So far, only the Czech government has sent a letter congratulating the NUG liaison officer for Czechia on his appointment and welcoming the formation of the NUG. The international community can and should extend a similar recognition to the NUG. At the very least, it should hold active negotiations with the NUG and build international coalitions in support of it.

Then there are legal tools. The principle of universal jurisdiction, for example, is available to any nation that might wish to invoke it. Under this principle, any national court can detain and prosecute individuals accused of war crimes and crimes against humanity. So far universal jurisdiction has been exercised by over 15 countries, mostly in regard to Rwanda. What this means in practice is that when the Myanmar generals travel abroad, they run the risk of being detained.

Regular people can contribute by donating funds to support the CDM inside Myanmar and show their support to those who continue risking their lives in their anti-coup resistance. Symbolic gestures, such as the global solidarity action with the people of Myanmar on June 12, are also of great importance.

In a perfect world, the above described internal and external actions would make the Tatmadaw crumble sooner rather than later. In the actually existing world, however, countries are not aligned in their interests and are not necessarily ready to act together for the good of one nation. For example, on April 1, the when the U.N. Security Council suggested sanctioning the junta, China and Russia blocked the attempt. We therefore need to be prepared for the fact that the lack of international consensus and support will lead to some ugly alternatives.

What Myanmar’s people are facing in the cities now is the same thing that the military has been doing in ethnic minority areas for decades, and they are starting to realize that. With the military unlikely to back down, increasing numbers of Myanmar protesters have begun to react to its violence with violence of their own.

While some still believe in non-violence as the most appropriate strategy for the pro-democracy movement, others have put their hopes in the formation of a federal army that can defeat, and eventually replace, the Tatmadaw. Regardless of whether armed struggle is the most effective strategy, it is a route that growing numbers of activists are taking.

Initially non-violent, the CDM has started to turn to violence as well. From using slingshots and other homemade devices to defend themselves against the security forces’ war weapons, people have gradually resorted to the use of more sophisticated weapons. By the end of May, the resistance was stepping up its assassinations of junta officials, especially in Yangon. Targeted assassinations of junta personnel (soldiers, police, and informants) via explosions and drive-by shootings are becoming more and more common. In a particularly gruesome incident, a bomb targeted a wedding party, killing four people, including the bride.

The radicalization of Myanmar’s protesters is feeding into the country’s cycle of violence. Following events from far away, it might seem hard to understand why people have chosen to suddenly take up arms. But the situation in Myanmar is one of the clearest examples of violence as the only remaining form of defense against brutal attacks from an illegitimate and despised military government.

If we have learned anything from history, it is that it proceeds by a series of steps and counter-steps. Many important historical changes have taken an unquiet and violent form, from the fall of feudalism and the struggle for equality of women to workers’ fight for the eight-hour day. Seen in historical perspective, it is unsurprising that people, in Myanmar and elsewhere, are willing to lay down their lives for their ideals.

Do the actions of Myanmar’s protesters constitute attack or defense? It may be hard to draw a clean line between them. If people rejecting dictatorship are raped and beaten at police stations or taken away in unmarked trucks to who-knows-where, the principle of non-violence may not achieve much.

People are ready to fight back. Recently, my Myanmar friend, the same one that I spoke to as the coup was unfolding on February 1, posted this message on his Facebook wall: “Am I happy in these days? No. I am not happy since the coup. No one is happy around me. Every single day, we people talk and think about what we could do. We are ready, if the fights come.”