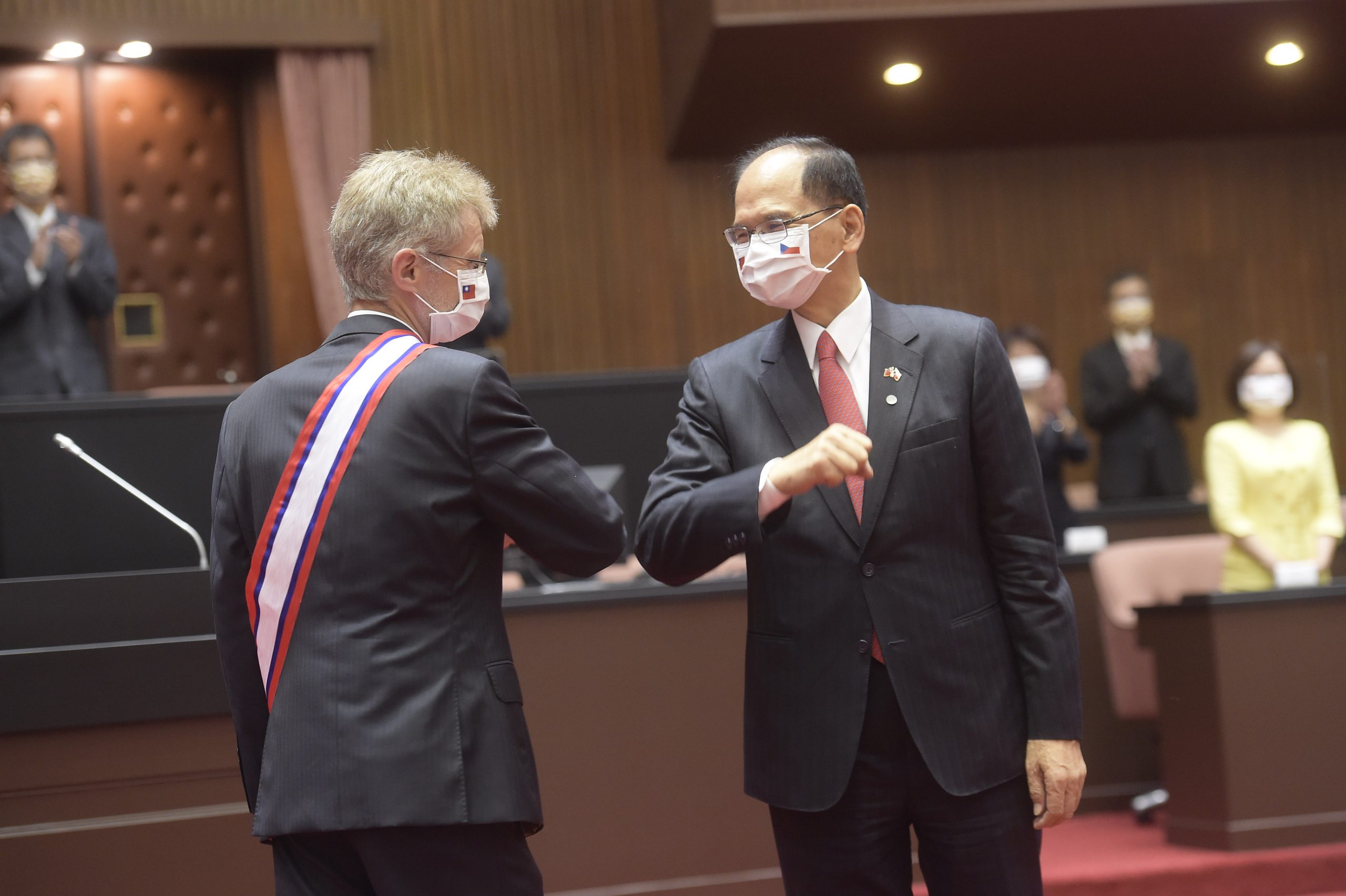 Chinese media see the U.S. pressure and alleged ‘flaws’ of the democratic system as the driving forces behind Czech Senate President Vystrčil’s visit to Taiwan.

Czech Senate President Vystrčil’s delegation to Taiwan was so far the highest-ranking official visit ever from the Czech Republic to the self-governing island in the Asia Pacific. The 89-member delegation went to Taiwan on a six-day visit (Aug. 30-Sept. 4) aimed at deepening economic and cultural cooperation between the two countries. As expected, Vystrčil’s visit to Taiwan touched the rawest of nerves in Beijing that engages in official diplomatic relations with Prague. When commenting on the visit, China did not refrain from intimidation, spreading conspiracies and misinformation.

The Czech Republic has been known for being one of the most vocal Central European countries when it comes to criticism of the Chinese regime’s poor human rights record, repression of religious minorities, or supporting Taiwan. However, recent development in their bilateral relations with Beijing only reinforces this image.

Miloš Vystrčil’s intent to visit Taiwan came amid a recently growing discussion and negative opinion on China in Czech society. Very few of the investment promises made by China and its staunch supporter Czech President Miloš Zeman have materialized. The absence of long-awaited economic incentives gradually led the public to reconsider the prospects of the Sino-Czech partnership and perhaps reminded some about the futility of kowtowing to the Communist regime. Diplomatic relations between the two countries started cooling down last year over support for Tibet from Prague city authorities as well as their revoking of the Prague-Beijing sister-city agreement. Nonetheless, this time, Senate President Vystrčil’s delegation to Taiwan seems to have flouted the conventional relationship between the two countries.

Beijing immediately reacted by claiming Prague had crossed the red line on Taiwan. During his trade mission to Germany, Chinese Foreign Minister Wang Yi pointed out the act was a serious interference in China’s internal affairs and reminded the Czech Republic as well as the rest of the world that there is only one China, and Taiwan is an inalienable part of it. “This is a general consensus of the international community. Adherence to the ‘One China’ principle is the political basis for China to establish diplomatic relations with other countries, including the Czech Republic, and it is also a political commitment made by the Czech Republic to China. The Czech government and those who hold public power in the Czech Republic should abide by this political commitment,” Wang commented.

Similarly, adherence to the official party line is what could be seen in Chinese media reporting about the Czech delegation to Taiwan. For instance, China Daily, which is directly owned by the Propaganda Department of the CCP, reported about Vystrčil’s visit borrowing lines from the official statement issued by the Chinese embassy in the Czech Republic on August 29.

China used intimidating language already early this year when Vystrčil’s predecessor Jaroslav Kubera planned to visit Taiwan. At that time, Chinese ambassador to the Czech Republic Zhang Jianmin had threatened in a letter that if Kubera went to Taiwan, China would retaliate against Czech businesses, such as automaker Škoda, lender Home Credit Group, and musical instrument maker Petrof Pianos. This time, following the Czech delegation to Taiwan, not only were these menaces reiterated, but Vystrčil himself was targeted as well. Probably the most discussed on the international level was Chinese Foreign Minister Wang Yi’s threat that reflects well China’s recent shift from low-key to a more aggressive diplomatic tone: “The Chinese government and people will never just sit and watch. Vystrčil must pay a heavy price for his short-sighted behavior and political speculation.”

Similarly, intimidating rhetoric was often part of media reports. Global Times in their English coverage about Vystrčil’s visit to Taiwan showed little restraint in using abusive, colloquial, and rather arrogant language. Some of the media coverage directly attacked Miloš Vystrčil by calling him not only a violator of rules but also a clown or political hooligan attempting to show off. Specific criticism addressed to the PRC by the Western world is often portrayed as being “anti-China” which implies being an affront to all Chinese people. It was thus common to see reports stressing the ire of the Chinese public at Vystrčil’s act demanding to make him pay a price for having violated China’s sovereignty. According to the article, many netizens suggested to impose sanctions, or even cut economic or diplomatic ties with the Czech Republic. So far, in protest of Vystrčil’s visit to Taiwan China canceled a 5 million CZK order from Petrof Pianos. Whether other businesses will be affected is yet to be seen. However, given the scant economic cooperation between the two countries, the estimated cost of standing up for fundamental values does not seem to be too high.

Reaffirming the official position of the Czech Republic

To assure the Chinese domestic audience that Vystrčil’s act is an isolated case and does not represent the norm, Chinese media widely emphasized the disapproval of the Czech government, the Czech business community, as well as the Czech citizens. Especially important was, however, to emphasize that despite Vystrčil’s high-ranking position, the majority of the Czech government stands unquestionably by China. President Zeman, who is deeply devoted to promoting relations with Beijing, was thus often quoted emphasizing the importance of the partnership as well as his intentions to attend the China-CEEC Leaders’ Summit once the pandemic will ease. Online portal Baijiahao quoted Zeman according to whom Vystrčil’s visit to Taiwan was a “naïve provocation”

The Czech position on the unconventional visit to Taiwan was additionally emphasized reporting that except the Czech President Miloš Zeman it was equally not recommended by Speaker of the Chamber of Deputies Radek Vondráček, Prime Minister Andrej Babiš and Minister of Foreign Affairs Tomáš Petříček. It further stated that the visit was labeled by the President’s Spokesperson as systematic damage to international interests. Covered was also the press release of the Minister of Foreign affairs of the Czech Republic, who declared that the foreign policy of the country is determined by the government and not by the President of the Senate. Similarly, President Zeman’s decision to not invite Vystrčil to any high official meetings on foreign policy in the future offered at least a partial consolation to the irked Chinese audience –  that domestically Vystrčil’s visit to Taiwan would not be left without any consequences.

Democracy is an enemy

It had been stressed multiple times that the motivation behind Vystrčil’s visit to Taiwan came from the need to stand up for freedom and democratic values that the Czech Republic and Taiwan long share in common. Being the fuel for Taiwan’s quest for independence and one of the main values the island’s government adopts to promote itself internationally, democracy represents a direct threat to China’s territorial integrity. One of the frequent strategies used by Beijing to defend itself against this kind of ‘threat’ is to bolster its own reputation and make its authoritarian system appear superior. Therefore, frequently occurring in several articles was a narrative reaffirming the strength of China and the willpower of its 14 hundred million people in contrast to the small and distant European country, whose senate president is a mere nobody. Similarly, the ideological language was used to remind that the ‘One China’ principle which has been violated by the Czech delegation is “carried out by the strong principles of China’s ‘anti-separatist law’ and by the big and powerful supervision of the PLA.”

One more method to counter perceived Western wrongdoings is to undermine the reputation of democracy for the Chinese domestic audience. As a consequence, this time Chinese media blamed the disunity of the Czech government over the delegation’s visit to the Pacific island on an inferior political system in the country. As an article in News Sina suggested, the president of the Czech Republic exerts only formal power and thus cannot handle opposition and prevent elements, such as Vystrčil acting against the government will and the public opinion.

Indeed, the existence of diverse and competing opinions is the basis for a democratic arrangement, and voices in support of Taiwan are closely connected to the liberal strand in Czech politics. The same report in News Sina properly traced the legacy of anti-China sentiments in the Czech politics back to Havel, who was well-known for his friendly attitude towards Taiwan and even publicly expressed support for it. Vystrčil, whose Civic Democratic Party (Občanská Demokratická Strana) originated from the disintegrated Havel’s Civic Forum (Občanské Fórum), thus according to the article unsurprisingly shares Havel’s ideology and political convincement.

Further labeled as a disturbing element in the Sino-Czech relations was Vystrčil’s predecessor Jaroslav Kubera, who “also played with fire on Taiwan’s question” by planning to visit Taiwan in his official capacity, as well as the Prague mayor Zdenek Hřib. The latter one’s anti-Chinese sentiments are according to the article the result of his previous studies and work in Taiwan. Hřib was a member of the delegation led by Vystrčil and was originally supposed to join Kubera’s delegation. According to an article, Beijing supposedly immediately canceled the sister city deal with Prague and temporarily suspended all the official visits due to Hřib’s plans to visit Taiwan alongside Kubera (and later Vystrčil). In reality, however, Beijing ended the partnership after Hřib approached Beijing about removing the ‘One China’ policy clause from the agreement as it was making the deal unnecessarily political. Nonetheless, after Beijing terminated the sister agreement, Prague established sister city ties with Taipei and thus further enraged China, which resulted in Shanghai canceling its own agreement with Prague. This was historically the first time a Chinese city canceled a sisterhood agreement over its partner establishing ties with a Taiwanese town.

The U.S. is to blame

The imperfect political arrangement in the Czech Republic is allegedly not for the only cause of anti-China sentiments in the country. Given the growing rivalry between China and the USA, the rhetoric stressing the leading role of the U.S. in luring Beijing’s allies to its ‘anti-China club’ is not rare in Chinese media. Americans have been recently widely depicted as the main orchestrators of the Hong Kong protests or spreading the new coronavirus in China. Adding to the negative propaganda targeting the U.S. are accusations of having instigated the so-called ‘New Cold War’ against China amid the European Union allies. Indeed, some countries in the EU have been gradually hardening their position towards China over crackdowns on pro-democracy protests in Hong Kong as well as China’s handling of the COVID-19 pandemic.

Several articles blamed the USA as responsible for these growing anti-China sentiments in Europe, particularly the U.S. Secretary of State Mike Pompeo. A point highlighted by the media was his recent visit to the Czech Republic this year when he delivered a speech in the Czech Senate declaring that China poses a greater threat to the Western world than the Soviet Union did during the Cold War. Pompeo’s hostile intentions were emphasized in relation to the main areas of his discussion with the Czechs, such as countering Russian and Chinese influence and checking the expansion of Chinese firms’ global role in 5G networks – topics especially sensitive to Chinese amid growing distrust of China in Europe and elsewhere.

In this regard, reports about Vystrčil did not miss the chance to claim that the force behind the Czech delegation’s trip to Taiwan came from the USA. To validate the discourse to the domestic audience, the Chinese media widely quoted experts, who argued that Vystrčil’s visit to Taiwan has a strong connection to the current China-US ‘decoupling. An article further quoted an alleged German report according to which Pompeo encouraged the delegation to visit Taiwan and supposedly claimed it was a good plan. Siding with the U.S. at the expense of relations with China is usually portrayed as an outrageous betrayal and so the gravity of the Czech visit of Taiwan was further elevated to another degree.