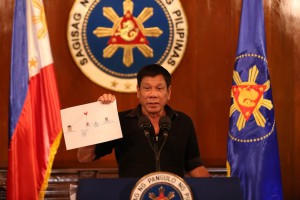 The President of the Philippines Rodrigo Duterte was a dark horse when he entered the presidential race a year ago. The powerful narrative of establishing order in the southern city of Davao over his two decades as mayor by smashing drug trade and crime with iron had, helped him gain a strong following. However, his victory in May shocked the international community and his actions continue to hit the headlines and, more strikingly, effectively influence regional politics.

Duterte is undoubtedly attractive for some audiences with his tongue-in-cheek speeches, using lot of slang and very direct language. More importantly, for many Filipinos he is a transformative figure who can bring order and justice back to Philippines. Yet his controversial comments and, much more seriously, disregard for human rights have been criticized worldwide. In April, Duterte said that an Australian missionary raped and killed in prison during his time as Davao’s mayor “was so beautiful” and that he thought “the mayor should have been first”. Later, he has told the European Union to go f**k itself for condemning his extrajudicial killing of suspected addicts and drug-pushers. This happened only few days after he expressed a regret about calling Barack Obama “a son of a whore”. Responding to international criticism, Duterte even threatened to leave the UN. Recently Duterte said he would kill as many addicts as Hitler did Jews in his crackdown on users and dealers. Apparently, there is no limit to Duterte’s “art” of plain speaking.

During the months leading to his election in May, Duterte promised a bloody campaign against crime, particularly against the illegal drugs trade. Perhaps most disturbing is that he is doing exactly what he promised. Since he came to power, over 3000 individuals have been killed in daily attacks. The police have been allegedly responsible for a significant number of those killings. There are “watch lists” with the names of politicians, policemen and civilians suspected of involvement in the drug trade. But the deaths are not limited only to these lists. Yet the Philippine Drug Enforcement Agency still can’t tell exactly how many Filipinos are suffering from drug addiction or are involved in the drug trade. Facing the brutal campaign of the state authorities, many drug addicts turn themselves in and seek medical help but the rehabilitation centers are already at full capacity. In the end, lots of addicts are left to battle addiction mostly on their own. What’s more, lots of those who surrender to authorities are arrested and sent to overcrowded prisons.

It seems that Duterte has fallen into a trap that many leaders have faced before. He thinks that drugs are a criminal issue that can be solved. Years of experience have shown that if there is demand, illegal narcotics will always find a way into the market. Until extreme poverty, unemployment, homelessness and other problems still exist in the Philippines, the demand for illegal drugs will not wane. For, Duterte highlighting the drug trade as the biggest issue masks the other structural problems facing the Filipino people. The Asian Development Bank estimates that now a quarter of Filipinos live below “poverty line”.

Despite the ongoing upheaval, Duterte continues to enjoy staggering rate of popular support, bordering on 90 percent. The growing death toll from the Duterte’s anti-drug campaign may have drawn criticism from abroad, but most Filipinos hope that his approach will bring the same boost in security and economic prosperity nationwide as in Davao.

Turning to the issue of foreign policy, Duterte also seems to fashion his own style. In the middle of October Duterte went for a four-day visit to Beijing “to warm up his country’s ice-cold ties with China”. The former Philippine president Benigno Aquino III challenged Beijing’s expansive territorial claims in the South China Sea before the International Court of Arbitration in The Hague. Even though the Philippines won the case, Duterte wants to start the dialogue on business and cooperation in wide spectrum of areas and is not interested in bringing up the ruling in the context of bilateral negotiations. In addition, he expressed his gratitude to China which offered explicit support for Manilla’s effort to fight against drugs, as also proved by the funding of a rehabilitation center to be opened in the Philippines.

Duterte lauds China as a country which is willing to extend a helping hand to developing nations, as illustrated by its devotion to helping Southeast Asian and African countries to sustain their development within their “no strings attached” approach, in contrast with Washington’s “habit” to interfere in domestic affairs of other countries. During the meeting with Chinese leaders and businessmen, Duterte with certain bravado announced the separation from the US – both in military and economics. Later on, it was explained by the country’s trade minister Ramon Lopez that the country is not stopping trade with the US and the president only mentioned his desire to strengthen the ties with China and the ASEAN region. Further adding to the enigmatic picture, during Duterte’s state visit in Japan which followed his stop in China, he called Japan “a special friend who is closer than a brother” and said the Philippines would continue to work closely with Tokyo. This puts Japan, another important ally of the US in Asia in the difficult position of trying to retain a balance in an increasingly tense region.

What really stands behind Duterte’s seemingly erratic behavior is not easy to uncover. However, he seems to be trying to have his cake and eat it, perhaps counting on Washington to tolerate his antics and maintain its support for Manilla while it accommodates China at the same time. So far this approach has proven successful and it remains to be seen what Philippines can get from burying the hatchet with Beijing. Some observers compare Duterte to Trump for his provocative rhetoric and unpredictability. Conversely, some see Trump’s remarks about American alliances during his campaign as leading to Asian leaders like Duterte feeling insecure about their ties with the US. In any case, Duterte’s controversial actions and rhetoric demonstrate the danger of loose cannons getting hold of executive power.