Why using the term ‘Chinese virus’ isn’t quite right. 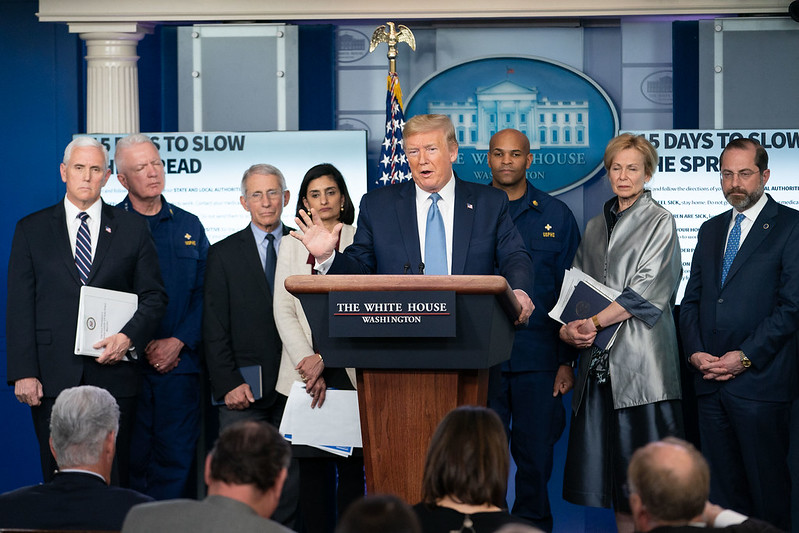 Being justly outraged over China’s spreading of conspiracy theories and hoaxes about the origin of coronavirus leads to some calling the virus ‘Chinese’ as a sign of resistance against Chinese propaganda. However, this is counterproductive as it only helps to spread harmful racist discourse.

Donald Trump used the term ‘Chinese virus’ for the first time on the 16th of March in his tweet. He later repeated this term on numerous occasions. He supposedly started calling coronavirus ‘Chinese’ in response to how the Chinese government is trying to cover up its initial source in China and started spreading conspiracy theories about the virus’s origin in the US army bringing it to Wuhan. While in Europe a large majority of politicians passed on the opportunity to work with this rhetoric, in Czechia major opposition political figures such as Miroslav Kalousek, the former PM Mirek Topolánek or Prague’s mayor Zdeněk Hříb adopted this language.

Trump and others are right to point out that the Chinese government is trying to scandalously cover up its share of responsibility, and that we should stand against it. However, there still exist multiple reasons why such language is not only unhelpful but also counterproductive.

Racism and incidents connected with virus

Usage of the term ‘Chinese virus’ has an obvious racist undertone and stigmatizes Chinese people and everything Chinese. Words have their own power and many crimes begin with statements which at first seem harmless. There should be no doubts about that, especially today.

We already have evidence proving that the epidemic, which spread from China, led to an increase of xenophobia on social media as well as in real life. The amount of documented racist incidents, which are connected with the virus has been increasing worldwide. This sadly includes physical attacks as well. These attacks are however not only aimed at people of Chinese heritage but at people of Asian heritage at large, such as Japanese, Korean, Taiwanese or Vietnamese, which the offenders often mistake because of their ‘Asian’ looks.

WHO and the EU

Because of reasons such as these the WHO has already established practices for naming diseases back in 2015. Upon the discovery of a new illness, terms that could stigmatize different groups of people should not be used to name it. “This may seem like a trivial issue to some, but disease names really do matter to the people who are directly affected. We’ve seen certain disease names provoke a backlash against members of particular religious or ethnic communities, create unjustified barriers to travel, commerce and trade, and trigger needless slaughtering of food animals. This can have serious consequences for peoples’ lives and livelihoods,” WHO explained.

In accordance with its own rules, on 11th February WHO agreed on naming the novel coronavirus SARS-CoV-2 and the illness which it causes COVID-19.

Opponents are pointing at the fact that illnesses such as the Spanish flu or the Middle Eastern Respiratory Syndrome (MERS) exist. However, this is due to these illnesses appearing before the new WHO practices, as well as their names being already commonly established. In addition, the negative effects of naming diseases after geographical locations were just the motivation for establishing the new naming practices.

The high Representative of the European Union for Foreign Affairs and Security Policy, Josep Borell has in the last few days explicitly stated his commitment towards the WHO naming practices and against Trump’s language. The creation of such names thus weakens and goes against the legitimate decision of a specialized UN agency and the position of the EU.

While the main excuse for using the term ‘Chinese virus’ is the opposition against the Chinese propaganda, the result is quite the opposite, as it just helps it. After the initial outbreak in China, it was obvious that many Chinese were quite unhappy about how the state reacted. Calls for more freedom of speech started popping up on social media, and state censors weren’t quick enough to delete all the critical comments. It was the largest crisis CCP had to endure in the last 30 years, and people were openly discussing whether this epidemic could end up being the ‘Chinese Chernobyl.’

However, as time went by, the public mood in China started to shift. Chinese public was surprised to see how slowly the governments of Western democracies were to react. Thus, the response of their own government became more acceptable. While it responded late and allowed the virus to spread, it eventually managed to get the outbreak under control, no matter the price.

Ever since the initial outbreak, the Chinese state media tried to sidetrack its own public by pointing out the supposed or real racist incidents in the world. The spread of the term ‘Chinese virus’ may just help the Chinese government convince its citizens that the West is ‘anti-Chinese’ and the Chinese people should support its own state-party, as it is the only thing working in their interest.

However, this whole debate should currently be off table anyways, as it just distracts from efforts to fight this outbreak. Although this may be the very reason, why Trump started with such rhetoric in the first place. According to the media, the U.S. intelligence informed him about the potential of a pandemic as early as January of this year. President however didn’t act, and even a few days ago was still downplaying the whole pandemic. Today, Trump likely realizes the extent of the whole issue, as well as the potential economic impact it may have. It is especially likely that in the context of the upcoming elections, he will try to cover up his many shortcomings. Escalating the conflict with China may just be the ideal opportunity.

Every single one of the aforementioned reasons should be enough by itself, but combined, they make up an argument which should persuade anyone, who is not indifferent about the normalization of racism, weakening the legitimacy of the UN and EU institutions and also doesn’t want to help politicians cover up their failures.

It is necessary to fight the Chinese propaganda and point out the serious failures of the Chinese authoritarian regime which vastly worsened the current situation. But calling the coronavirus ‘Chinese’ isn’t going to help this effort, it will just undermine it.