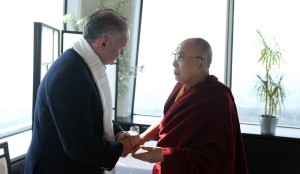 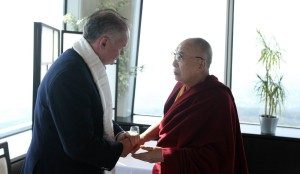 he consecutive meetings of Slovak president Andrej Kiska and Czech politicians with the Tibetan spiritual leader Dalai Lama have caused quite an upstir in both countries, and continue to reverberate through the political and media environment. In Slovakia, Prime Minister Róbert Fico has directly criticized the decision of president Kiska to meet with the Tibetan leader, pointing at the negative effects on the prospect of Chinese investment in the country. In Czech Republic, the four highest state representatives headed by President Miloš Zeman condemned the meeting in a highly unusual common statement and confirmed Prague’s robust pro-China policy course of the past few years.

In striking contrast, Chinese media have remained relatively silent on the issue, rarely venturing beyond the scope of the official response of the Chinese Ministry of Foreign Affairs, which has expressed condemnation and declared it will undertake corresponding response. The denouncement of the meetings by both Slovak and Czech officials was prominently reported on by the state media. Nevertheless, limited “opinionated coverage” may be attributed to the sensitive nature of the issue, and may also reveal something about how Beijing tries to frame it.

One of the few creative articles comes from the page Tibet.cn (西藏网) an official Chinese propaganda website dedicated to spreading the government message on the Tibet-related issues. The article still relies mainly on selected quotes from Hong Kong and foreign media to frame the subject. The reason for the Czech politicians’ meeting with Dalai Lama is said to be pragmatic, as a means to gain the support of the part of the electorate which is sympathetic to Tibetans (一些捷克政治人物不愿得罪同情藏人的那部分选民，会见达赖使他们能获得这些选民支持). It is also stressed that these politicians belong to the “right wing” Christian party. On the other hand a Tibetan expert is quoted saying that the leaders who have met with Dalai lama are not necessarily the voice of the electorate, and, consequently, that the criticism of the meeting by president Zeman and other highest state representatives may not offend the voters. It is pointed out that Czech Republic is an important economic partner in the region and the Czech people are also to gain from the relationship. (…但两个领头的副议长未必就是民意的喇叭筒，“总统和议长的表态也未必会得罪选民，毕竟捷克是中国在中东欧地区第二大贸易伙伴，在如今这个高度信息化的社会，选民也会从中捷贸易中获益). In all the articles on the issue, the background of the upward trajectory of the political and economic relationship with Prague is prominently highlighted.

Before visiting Central Europe, Dalai Lama has also been welcomed by the president of the European parliament Schultz in Strasbourg in September. The page Tibet.cn has carried an article, again citing the Hong Kong media and attacking Dalai Lama, whose influence is said to be gradually waning, and portraying the visit to the EU HQ as nothing but his dying flash that cannot redeem the tragic fate of his utter failure. (…达赖的国际影响力也越来越小，他能到欧洲议会访问，充其量只是回光返照，但却无法挽回达赖将彻底失败的悲剧命运).

The politicians who are willing to meet with Dalai Lama are said not to be truly interested in helping in his cause or offer assistance. What they want is to use this to put pressure on China and challenge its national interests while also expressing their own unconventionality and independence. ( 欧洲议会议员接触达赖，并不是支持他的政治主张，也不是想要给予援助，而是希望借此机会向中国施加压力，挑战中国的国家利益，同时表明自己特立独行). As several European leaders have shunned Dalai Lama in past few years owing to the increasing Chinese pressure, Beijing can now successfully paint those who meet him as outliers who want to politically differentiate themselves (展示自己的与众不同). For example, during his visit to France, president François Hollande did not receive the Tibetan leader, neither has the former British Prime Minister David Cameron a year ago.

Coming to the reaction of netizens on the matter, the opinions tend to be much more colourful. Several participants of internet discussions criticize the Chinese government for being too weak and only speaking of retributions, yet doing nothing. In Slovak and Czech case, netizens call for breaking up relations and applying sanctions to make these countries aware of Chinese might (适当制裁一下这些小国家，让他知道中国的实力). The Chinese government is seen as impotent, creating an image of China as a pushover (中国在国际上的形象，就是一个人人可捏的软柿子) and, due to its incompetence, giving birth to two-faced nations (中国政府的无能造就了一大批两面派国家) that show a friendly face to China but conspire behind its back. Czech Republic is one of these countries, with netizens wondering how could Zeman, who attended the last year’s military parade (as one of the few western leaders) and visited China, claiming Czech Republic has the best relationship with China in EU, suddenly turn against it.( 捷克总统又是出席抗日阅兵又是访华的，号称关系最好的欧盟国家 ，这么快就翻脸了？…) Many of the Chinese netizens seem to be lost on the intricacies of the democratic system and view Prague as a monolith.

Undoubtedly, the views expressed by netizens may not necessarily be representative of the moods of the general populace and may give prominence to more extreme views. Yet, their very nature may explain why very few media articles would express other than officially sanctioned opinion on the Dalai Lama visit. This, of course, is the case not just in this issue, but is very commonplace as a tool to guide the popular opinion. Beijing had to strictly condemn the reception of Dalai Lama but tries to keep the discourse within desirable bounds. Individuals who met the Tibetan leaders were thus presented as strictly following their own particular political interest and Dalai Lama himself as a persona whose global influence is clearly fading. Lastly, the condemnation of “unofficial meetings” by the governments in both Slovakia and Czech Republic significantly helped the Chinese official reporting to portray it as a mere deviation.