Chinese Media Watch: The changing focus on NATO as the primary instigator of “evil” 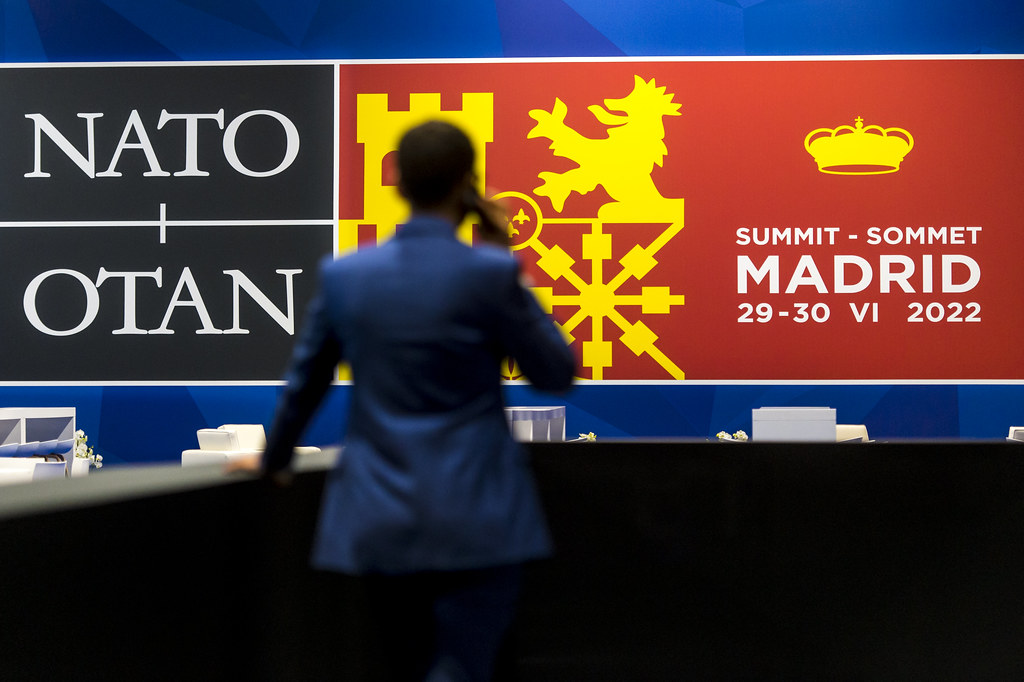 A relic of the Cold War era thinking and a hostility tool used by the US – that is how NATO could be described based on just a few articles in the Chinese media. The Alliance is routinely blamed for various aspects of the current global situation. Unsurprisingly, in response to the Madrid summit’s list of participants last month and Beijing’s label as a “systemic challenge,” it once again made headlines in the Chinese media, being given several more attributes, such as “aggressive,” “formidable,” and also explicitly “anti-Chinese.”

The Chinese media, including the People’s Daily (Renmin Ribao), which stands on the top of the Chinese party-state media hierarchy, has not been holding back on criticism of NATO since the Russian aggression against Ukraine. With the latest NATO summit and the first-ever attendance by four Asia-Pacific partners – Australia, Japan, New Zealand, and South Korea – the Alliance has once again become a subject of a blame campaign and propaganda that, among other things, aims to depict China as a peace-loving victim of “Western antagonism.” Besides calling NATO a “brainwashing” tool and an “aggressive” architect of numerous regional conflicts, the articles published in the People’s Daily described the organization as a “threat to world peace and development.” They identify the newly approved Madrid Strategic Concept as NATO’s plan to “accelerate the pace of eastward expansion” and “stoke anti-Chinese sentiments” beyond Europe and America, claiming that it manifests NATO’s adherence to the Cold War mentality as opposed to efforts to push for international cooperation.

Some articles go so far as to describe NATO as a “militant group.” An editor’s note published in the Global Times, representing a more nationalistic stance within the Chinese state media outlets, puts forward exactly this sort of picture. Apart from aiming to provide an in-depth overview of the Alliance’s origins and growth, linking them with the “inherent hostility of Western capitalist nations,” namely the US, the outlet also portrays the ongoing conflict in Ukraine as a provocation from NATO. It associates the presence of the Asia-Pacific leaders at the Madrid summit with NATO’s presumed efforts to “interfere in Asia” in the name of the US hegemony.

Unsurprisingly, the ongoing conflict in Ukraine is portrayed very differently in Chinese media compared to European and American coverage. Chinese media describe it in the context of NATO’s expansion toward Russia rather than as a result of the Russian-backed separatist movement and a premeditated full-scale attack. The invasion of Ukraine is understood as a consequence of the “long-term hostility of NATO” and its “looming squeeze” of Russia. It has been added to the list of “many more interventions” of the “militant NATO’s dark hand,” alongside Yugoslavia, Afghanistan, and Syria. Painting NATO as the architect of the majority of post-WWII military conflicts further reinforces the Alliance’s perception as a “turmoil-creating war machine,” a sentiment echoed by the spokesperson of the Chinese Foreign Ministry, Zhao Lijian. NATO’s enlargement and partnership with Japan and South Korea are portrayed as a real danger to Asia and the stability of the global order. The People’s Daily even refers to it as a “systemic challenge” to the world, warning of NATO’s alleged efforts to throw Asia-Pacific, “an anchor of peace and stability,” into disarray.

To back up the information provided in the articles, the People’s Daily drew upon remarks by the North Korean Foreign Ministry spokesperson about the “NATOization” of the Asia-Pacific region, Russian and Belarusian experts and journalists speaking about the “brutality” of NATO, and far-left Western newspapers such as Spanish alternative website Rebelión, manifesting it does not stand alone criticizing NATO. Chinese media not only show sympathy for Russia in the war in Ukraine but also aim at portraying the West as a hypocritic usurper of sovereignty and disrupter of peace that other countries – mainly Asian ones – should be alerted of.

However, the focus is not solely on NATO as opinion pieces and articles republished from various media and academic institutions repeatedly assert the US’ purported firm control over the Alliance. Washington is said to manipulate global security and expand its sphere of influence, with articles summarizing the history and development of NATO while stressing the key role of the US within its structure. The association between “NATO’s intention to extend its tentacles to the Asia-Pacific” and the US interest in “tying” other countries “to its war chariot” and “suppressing competitors and promoting its values under the guise of democracy, freedom, and human rights protection” drawn by the media is difficult to miss. South Korea, Japan, Australia, and New Zealand’s participation in the summit and their rising incentives to cooperate with the Alliance and increase military spending are explicitly described as a reflection of the US’ “strategic thinking of seeking hegemony by force.” Such actions have fed growing concerns in China over NATO’s future role as a tool to secure American interests and maintain its global hegemony.

Asia in the crosshairs…

The Madrid summit, especially the inclusion of China in the new Strategic Concept, has turned attention back to Beijing as another “competitor” of the West. Rejecting this label, Chinese media call it “exaggerated,” “false,” and “unjustifiable,” portraying it as a means of provoking confrontation and destabilizing regional and global security.

According to the People’s Daily, the US takes advantage of its position within NATO and coerces other countries to “choose sides” while attempting to “provoke a new cold war” under the “excuse of promoting prosperity.” Special attention is paid to Japan in one of the opinion pieces in the Global Times. The author explains the “real reason” behind its attendance at the Madrid summit and the government’s proposal to increase military spending: “Japan wants to strengthen its weak point in military through more frequent interaction with NATO and thus realize its great-power ambition.” At the same time, the article calls on other Asian countries to watch how Japan and NATO have been “changing the security conditions” and “exacerbating conflict” in the region. More and more countries are pressured to participate in multilateral mechanisms that portray Russia and China as targets, the Global Times claims, resulting in deteriorating relations between major powers and possibly threatening the international security order and peace.

The China Internet Information Center, a state-run web portal, sees it similarly, depicting NATO’s attention on the Asia-Pacific as an American push for Chinese containment in an attempt to secure its position in the international system and stir “another” war. Again, NATO is viewed as a “puppet” of the US, whose perceptions of the world are so tightly intertwined that the former’s policies cannot be formulated without the latter.

Xinhua also highlights the “de facto leading” position of the US within NATO and claims that the new 2022 Strategic Concept was “clearly designed” with American “self-serving hegemonic interests” in mind. More specifically, the document is supposed to prove that the “Western Cold War mentality” is not limited to Europe but is increasingly turning toward Asia as it beocmes a new target of the US “divisive strategy and anti-China agenda.” The American “bloc politics” is contrasted with the image of China as a peace-loving “contributor to global development and guardian of international order.” Identical narratives are repeated in official statements and government websites, such as those of the Mission of the People’s Republic of China to the European Union. Their remarks on NATO’s Strategic Concept highlighted the expansion of NATO beyond the North Atlantic and its intentions to “stir up bloc confrontation in Asia as it has done in Europe.”

The Chinese media outlets not only depict NATO as a “war-hungry” pact of Western states but also try to support their own narratives using the arguments of Western pro-Russian or pro-Chinese politicians and other personalities. This serves to play up the supposed divisions within Europe on NATO. For example, Global Times mentions that even its member states, mainly Spain, which hosted the latest summit, characterize NATO as a “criminal organization.” They describe Spain as “internally anti-NATO,” referring to statements of “some important political parties” in the country and protests organized in Madrid by the World Federation of Democratic Youth before the NATO summit took place. Similar protests were also highlighted by the Sina online news portal. Such claims are, nevertheless, largely at odds with the results of a recent survey showing support for NATO by 83% of the Spanish population, including those on the left of the political spectrum. Prior to the NATO summit, the Global Times also misrepresented the protests and strikes in Belgium over rising living costs, claiming that “tens of thousands of protesters” were expressing anger with NATO’s support for Ukraine. However, it is not the only outlet that relies upon distorted information to uphold its message. The People’s Daily also tries to invoke a growing sense of opposition toward NATO in Spain with reference to the Rebelión website, which is boldly presented as a regular newspaper providing objective information about current events rather than an anti-capitalist alternative news source.

Chinese social media such as Weibo implement a similar strategy where media accounts post statements on NATO and the war in Ukraine made by European politicians, including Irish MEP Mick Wallace, frequently featured in authoritarian state media. Chinese netizens usually view pro-Chinese and anti-US statements favorably as is evident in the comment section below a China Daily post citing Wallace asking: “What good is it for us to have bad relations with China?” Similarly, Zhao Lijian’s Weibo account stirred a wave of comments opposing “NATO’s expansion into the Asia-Pacific” as he reposted an article warning against NATO’s efforts to replicate “group confrontation” in Asia. On the other hand, the account of the US embassy in Beijing attracted Chinese netizens from both ends of the spectrum. While some believed NATO poses a threat to China and compared it to Nazi Germany, others perceived it as a defender of universal values and openly ridiculed other users of the platform for taking the news concerning China being a systemic challenge too seriously. The debates on WeChat appear far more homogenous regarding opinions on NATO, as many users called for its dissolution while others suggested China should unite forces with Russia and face NATO together. Although the representativeness of social media comments should always be associated with some degree of uncertainty, the March public opinion survey report published by Sinophone Borderlands and CEIAS supports the assumption that there is a strong sense of hostility among the Chinese toward the West. Results show predominantly anti-Western and pro-Russian sentiments in China, with Russia currently being the most positively perceived country among the Chinese.

It seems that the era of Chinese official narratives paying little attention to NATO has gone. The Alliance is likely to become another mainstay topic of Chinese propaganda and anti-western rhetoric, helping to strengthen nationalist sentiments among the Chinese population.