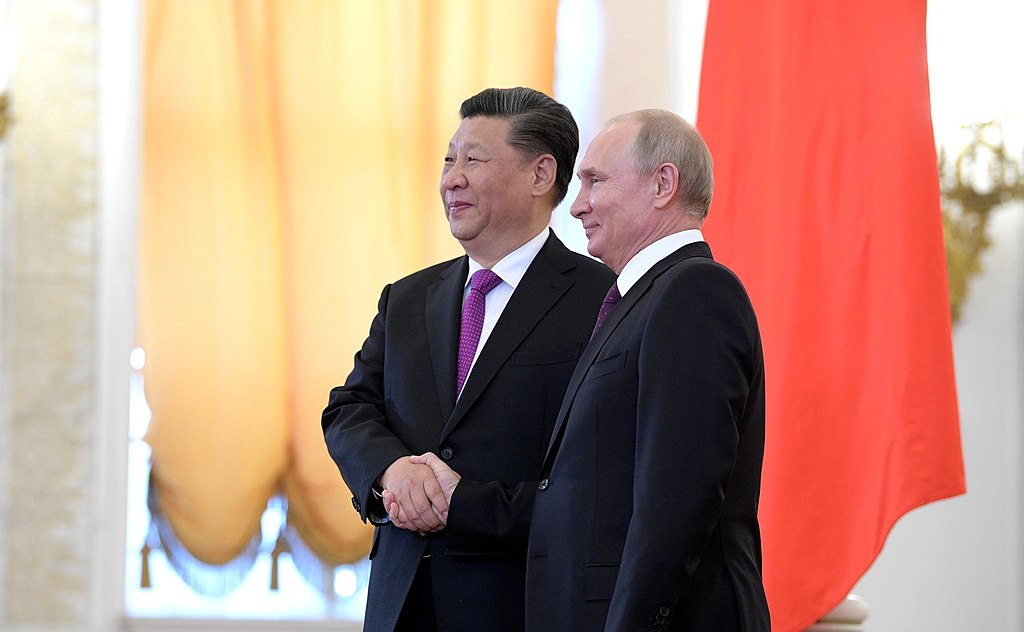 Pro-Russia sentiments on the Chinese internet reflect growing solidarity between both nations that culminated in an official form when Vladimir Putin and Xi Jinping signed a joint statement on February 4 on the side-lines of the Winter Olympics. Chinese netizens praise and admire Putin while they have nothing but scorn for Ukrainian President Zelenskyy, facing no dilemma deciding which side to take in the conflict in Ukraine. For the government officials, on the other hand, handling the situation they found themselves in poses quite a challenge.

Shortly before the opening ceremony of the Beijing Olympics on February 4, China’s leader Xi Jinping and Russia’s President Vladimir Putin met in Beijing, with the countries releasing a joint statement shortly after. The two leaders declared “no limits” to friendship and cooperation between their countries, while standing side by side in their opposition to further enlargement of NATO and formation of security blocs in the Asia Pacific.

Even though the joint statement did not mention Ukraine by name, it included an implicit reference to the crisis on the borders with Russia at that time, as the document condemned “attempts by external forces to undermine security and stability in China’s and Russia’s adjacent regions.” Furthermore, both states confirmed their opposition to Taiwanese independence and manifested their commitment to deepen cooperation and safeguard “international fairness and justice” together.

Just a few weeks after the historic meeting, Ukraine is facing a full-scale Russian invasion, in a largest conflict in Europe since WWII. While the European Union states, the US, and their allies strongly condemned Russia’s act of aggression and implemented severe sanctions in a united fashion as Russian tanks edged towards Ukraine’s capital Kyiv, China has tried to appear neutral. Beijing has refused to condemn the Russian invasion, shifted the blame for the whole situation to the west and abstained in key UN votes condemning the aggression.

Looking at the Chinese media space, the semblance of Chinese neutrality quickly vanishes under the onslaught of anti-Western propaganda and official Russian narratives. China has refused to call the Russian attack on Ukraine an “invasion” and referred to it as a “special military operation,” in line with Russia’s framing. Instead of calling out Russia for the unprovoked aggression, the Chinese media blame the West for the escalation of the situation to where it is today. The media refer to “relentless eastward expansion of NATO and continuous efforts to destabilize the countries of Russia’s ’Near Abroad’”, which was a legitimate security concern of Russia “that must be respected” as also stated by Chinese Ministry of Foreign Affairs.

The United States is the initiator of the current tension in Ukraine.

Global Times dismissed the notion that the situation in Ukraine could be described as a full-scale invasion, citing both Russian and Chinese scholars claiming that the military operations are “completely legal” and what is more, they are “a reaction by Moscow to Western countries’ exertion of pressure on Russia for a long time.“ Even more specifically, according to China Daily, “it is those who stubbornly view the world through the prism of [the Cold War era] and who approach today’s state-to-state relations with yesterday’s tools and mindset who are the architects of the present crisis.” Likewise, an article in People’s Daily pointed to the United States as the “initiator of the current tension in Ukraine (美国是当前乌克兰紧张局势的始作俑者),” describing the situation in Ukraine as the “the tip of the iceberg of America’s throwing the world into disarray (美国祸乱世界的冰山一角).” It is claimed that Washington has frequently provoked turmoil on a global scale to maintain its hegemony, and this scenario is now playing out in Ukraine again. According to the author, the US-led alliances have for a long time incited colour revolution (referring to the Euromaidan protests in 2014) and anti-Russia sentiments in Ukraine, sending weapons to Ukraine, and thus “deliberately hyping the risk of a conflict.”

Chinese media present the Russian actions as essentially defensive and reactive. The media adopted Putin’s “no other option for defence” statement and suggest that Russian security concerns have been compromised and Moscow had no other option but to act. Therefore, even though the support for Russian invasion is not expressed explicitly, it is the West and the US that are accused of orchestrating it. “Washington bears ‘special responsibility’ for Russia-Ukraine situation” reads a headline of another article published in the English version of the Global Times, referring to the remark by German Foreign Minister Annalena Baerbock who emphasized China’s responsibility with regard to Ukraine after its abstention on the UN Security Council resolution deploring Moscow’s invasion of Ukraine. The author further claims that it is “way too obvious that the US has been creating the crisis, and profiting from it” and suggests that the solution to the conflict might be “easy”, saying that a guarantee that Ukraine will not join NATO could be enough.

The Global Times also published an article by a Russian expert that is basically just a rehash of the official Russian narrative, as it states that “Russia is ending the 8-year war triggered by the pro-Western Ukrainian regime” which could be seen, according to the author, as “an integral and predictable part of Washington’s global strategy towards the world hegemony.” Besides the pro-Russian commentary in the Chinese media, there is also a notable sympathy for Russia on the Chinese social media.

Under the translated speech by Vladimir Putin, in which he provided the rationale behind the decision to send troops to Ukraine, Chinese netizens seem to be largely inspired by his reasoning and in awe of Putin’s “greatness” and  ability to stand against the “Western oppression and imperialism.” On Weibo, some users called the speech a “masterpiece (堪称文学名著的语言)” while describing Putin as “a real strategist and national hero of Russia and even the Slavs of Eastern Europe (普金真[…]战略家，俄罗斯乃至东欧斯拉夫人的民族英雄)” or “Putin the Great (普京大帝).” For some, the Russian President’s speech was so touching that they “almost burst into tears (声泪俱下)”. Volodymyr Zelenskyy, to the contrary, is often mocked for his former occupation as an actor and perceived as “politically incompetent.” In general, the sympathy comes from the echoes of China’s perceived treatment by the West – being bullied and oppressed.

If it was not for the instigation and advocacy of those fascists, Ukraine would not have reached this point.

The narrative where the Ukraine is presented as led by fascists also finds a receptive audience in China. On Twitter-like platform Weibo, many netizens expressed their support for Russia while pointing out to the “neo-Nazi government” of Ukraine that also criticizes China (纳粹政府还反中) as the culprit. “If it was not for the instigation and advocacy of those fascists, Ukraine would not have reached this point (如果没那些法西斯的挑唆和鼓吹，也不会置乌克兰到这种地步),” claims one of the posts while another reads “Ukraine is being fascized, the entire Western world is returning to fascism, and this time, the Russians are the new ‘Jews’ (乌克兰在法西斯化，是整个西方世界都在重返法西斯化，而这次，俄罗斯人就是新的“犹太人”).” Chinese social media users also search for tips on how to support Russia, be at via buying Russian products or actively seeking ways to make donations. Many such comments appeared directly below a video titled Ukraine seeks help from China in a critical situation and appeals to Chinese people to donate money (乌克兰形势危急对华求助，呼吁中国民众捐款，却因一个举动引争议) shared on Bilibili – an online video platform.

Nevertheless, while the pro-Russian narratives definitely dominate, support for Ukraine can also be found on social media. General anti-war sentiment and expressions of horror about the tragic impact of the war on Ukraine’s civilian population also colours some of the discussions, even if many netizens seem to revel in the spectacle of war. However, it is often only a couple of minutes before pro-Ukrainian sentiments might be reported and consequently blocked or deleted. Other netizens also do not react very well to such posts, often attacking the commenters as “American dogs (美国狗)” or “morally bankrupt (道德沦丧).” As such, the echo chamber of pro-Russian narratives can also be a result of internet control, as shown by the censorship of anti-war statement made by prominent Chinese academics or the leaked censorship instructions from one media outlet that called for no anti-Russian and no pro-Western content.

While Chinese netizens tend to express their pro-Russian stance and admiration for Vladimir Putin when it comes to the conflict in Ukraine, for China, it is a major challenge to take a clear-cut position. On one hand, Chinese officials repeatedly stress the equality of all countries and the respect for sovereignty and territorial integrity in their statements, including in reference to Ukraine. On the other hand, however, China has avoided condemning Russia for its invasion of Ukraine and acknowledged the legitimacy in Russia’s security concerns and thus a certain level of understanding for Putin’s actions.

Such a complicated pose is unavoidable for China, since the respect for territorial integrity and strict adherence to principles of non-interference is one of the most crucial pillars of China’s foreign policy and a tool for prevention of external meddling in its own domestic affairs, chiefly on the issue of Taiwan. Beijing therefore cannot afford to abandon those principles and simply side with Kremlin. Moreover, China also aims to maintain friendly relations with the West, including the EU.

At the same time, it has been only a few weeks since the Chinese and Russian leaders declared a “no limits” partnership, backing each other over standoffs on Ukraine as well as Taiwan. To dismantle good relations with Russia is not desirable for China, despite the difficulties of its current position. It thus seems Beijing will have to continue its diplomatic dance for a while. It will be interesting to see, though, how long it can last.