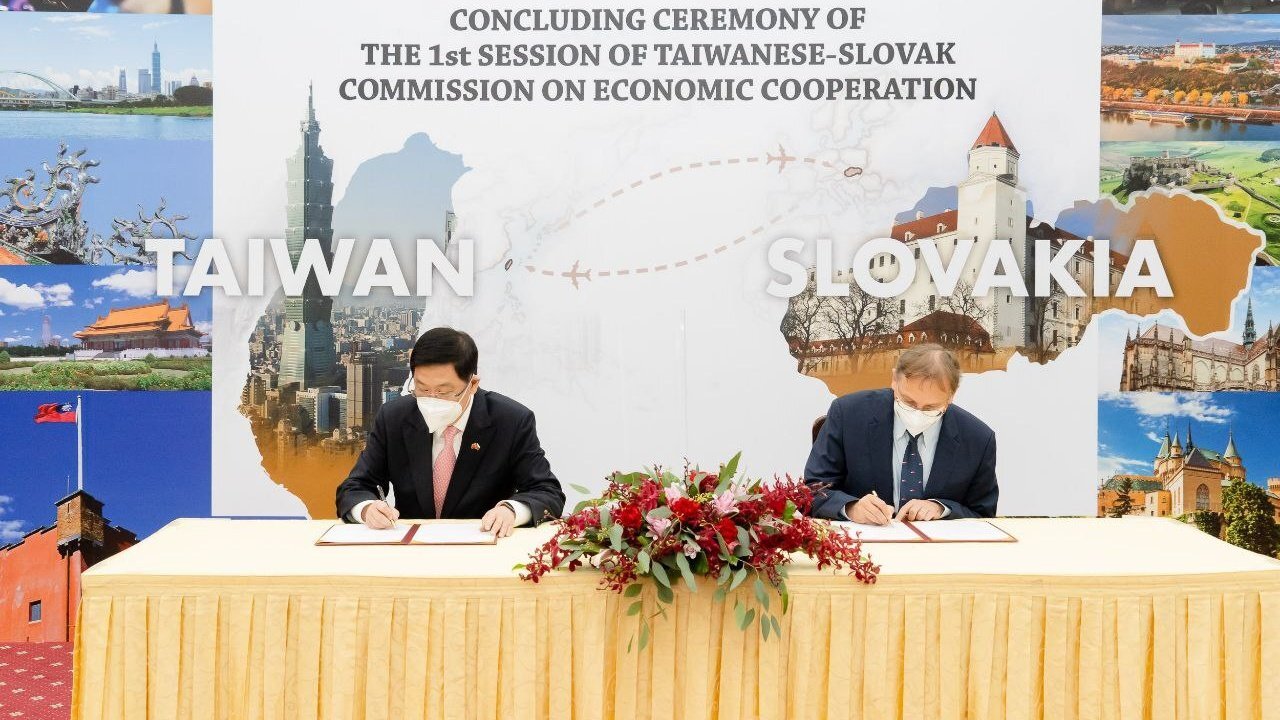 As tensions over Taiwan grow between China and Lithuania, Slovakia adds fuel to the fire by having sent to the island its highest-rank economic delegation ever. Should Slovakia expect similar retaliation measures as Lithuania? What did the Chinese media write about the visit?

On 5 December 2021, a Slovak delegation consisting of 43 members, including entrepreneurs and high-ranking officials from economic and foreign ministries led by the Deputy Economic Minister Karol Galek arrived in Taiwan. During the six-day visit, the delegation met with Taiwanese authorities and toured key research institutions to deepen the economic and trade relations between Taiwan and Slovakia. The visit resulted in the signing of nine memoranda of understanding (MOUs), primarily focused on trade and high-tech collaboration.

Chinese authorities commented that “the delegation to Taiwan violated the One China Principle, contributed to the arrogance of Taiwanese separatist forces, and severely undermined mutual political trust between China and Slovakia. Slovakia should abide by its commitment resulting from establishing diplomatic relations with Beijing, stop any form of official exchanges with Taiwanese authorities, stop supporting Taiwanese independence separatist forces, and should avoid further damage to China-Slovakia relations.” In the statement, Beijing also conveyed a message to the Taiwan authorities that “no matter what the guise or tricks they play, Taiwan independence is a dead end.”

The official website of the Chinese Embassy in Slovakia re-posted the statement and additionally accused Slovakia of breaking the 2003 Joint Communique. In the document, Slovakia promised to adhere to the One China Principle and not to establish official relations of any form or engage in official contacts of any form with Taiwan, as well as to only enter into private sector-led trade and economic relations with Taiwan.

Deepening of the Slovak-Taiwanese relations

What exactly angered Beijing? In past, Slovakia only sent visits from the opposition that were always kept a low profile. This visit, however, marks Slovakia’s highest delegation to Taiwan ever since 2003, when it established representative offices with Taiwan. The high-ranking delegation arrived in an airplane displaying Slovakia’s national symbols.

In Taiwan, this was interpreted very positively. Taiwanese experts were quoted asserting that “although Taiwan does not have diplomatic relations with Slovakia, the official government plane is an ‘indirect message’ that Taiwan and Slovakia have quasi-official relations.” The case was compared to the second visit by a U.S. congressional delegation in November this year that arrived on an aircraft with the words ‘United States of America’ and a U.S. flag, which also had political implications.

On the other side of the Strait the message was perceived as a provocation: “On one hand, they frequently provoke China, and on the other hand, they want to cooperate with China.”

It is clear to the Chinese side, that Slovakia intends to deepen its ties with Taiwan and follow the trend of other small European countries, particularly in Central and Eastern Europe (CEE). Among them, Lithuania is the one most under fire from Beijing for having agreed with the Taiwanese authorities that their representative office will bear the name Taiwan rather than Taipei as is the custom in order not to offend China. This is also the case of the Taiwanese mission in Slovakia, established in 2003, going under the name of the Taipei Representative Office.

Since then, the Slovak-Taiwanese relations have followed a rather standard pattern of development that is typical for relations between Taiwan and other European countries. As a member of the EU, Slovakia follows the EU’s One China Policy. This means that Slovakia maintains relations with Taiwan only through non-governmental bodies, recognizes Taiwan only as an economic and business entity. In fact, after the opening of the representative offices between Slovakia and Taiwan, the Slovak Ministry of Foreign Affairs described its plans to engage with Taiwan in a bifurcating statement, “In relation to the Taiwan issue, Slovakia will continue to abide by the One China Principle, however at the same time will engage with Taiwan in areas of ​​economy and culture that are acceptable to the PRC. ”

By standard, the representative offices opened between Taiwan and other countries primarily promote economic and cultural relations as often indicated in their names. After all, it is also the case of the Slovak Economic and Cultural Office, Taipei. However, recently China has been reacting to any kind of interactions with Taiwan with growing suspicion and irritation. This is the result of both Taiwan’s domestic politics that since 2016 keep distancing the island from the mainland as well as an overall shift in the Western perception of China in recent years. While China has been labeled a systemic rival by the EU, on the other hand, Taiwan has been perceived as a like-minded partner. Thus Chinese media place the Slovak delegation to Taiwan in the context: “Relationship between China and European countries changed dramatically. In a short period of time, the intensive anti-China performance of many European countries is really worth pondering.”

A profit-motivated enemy of China

As Chinese media pointed out, Slovakia’s interest to deepen relations with Taiwan has been observed already in 2020. “After the 2020 parliamentary elections, the domestic political situation in Slovakia has undergone great changes, and certain politicians claim to be ‘pro-Taiwan’. This is exactly the same as the actions of anti-China politicians in Lithuania and the Czech Republic.”

China observed this shift in Slovakia’s attitude towards the island when the Slovak President Zuzana Čaputová reaffirmed her support for the ever-highest-level diplomatic visit to Taiwan from the Czech Republic by openly criticizing threats addressed from Chinese Foreign Minister Wang Yi to Miloš Vystrčil, who led the Czech delegation.  At the time, Beijing called for a heavy price to be paid by the Czech delegation visiting Taiwan and the media produced a series of articles mocking and attacking Vystrčil. This time, intimidation and abusive language addressed to particular members of the Slovak delegation is missing in the Chinese media. This milder rhetoric almost certainly reflects the overall character of the Sino-Slovak relations that have not experienced so far any major crisis unlike the relations China has with the Czech Republic.

Yet It did not go unnoticed to Beijing that relations between Taiwan and Slovakia have been quite fruitful for the past months. Although labeled as masks diplomacy by Beijing, donating masks during the pandemic secured Taiwan enough support from several Central and Eastern European countries. Among them, Slovakia reciprocated the 700,000 received medical masks by donating 160,000 vaccines at a time when there was a shortage in Taiwan.

The most recent visit of the Taiwanese Foreign Minister Joseph Wu and the delegation led by the National Development Council Minister Kung Ming-Hsin to Slovakia in October 2021 testifies the interest of both countries to further intensify the relations. Harsh criticism from the Chinese side targeted mostly Minister Wu for advocating ‘Taiwan independence’ among Beijing’s allies.

As a result of the delegation to Taiwan, according to an article in Chinese media, Slovakia has become “an enemy of China for profit” for wanting to engage with Taiwan in the area of semiconductors, which is an important component in Slovakia’s dominant industry – automotive manufacturing. “Slovakia has openly opposed China for its benefit. However, as China develops, the Chinese market has huge potential. Only by maintaining a good relationship with China can the country’s development and progress be promoted. Otherwise, the country’s development will be caught in a difficult situation.”

The U.S. shadow cannot be missing

“The U.S. is acting behind small European countries that deepen ties with Taiwan” was one of the headlines covering the Slovak delegation to Taiwan. Various Chinese experts have been quoted to give legitimacy to the rhetoric: “Although the United States is currently unwilling to engage in strong conflict with China, they ​​believe they can suppress China by using other forces, especially small countries.” Wang Jianmin, a senior researcher at the Institute of Taiwan Studies of the Chinese Academy of Social Sciences pointed out that small countries like the Czech Republic and Slovakia will to a certain extent do what the United States asks them to do.

The motivation for them to act this way has been explained as “the hope to please the U.S.” In particular the American President Joe Biden, who has repeatedly stated that he wants to reshape relations with European allies damaged during the Trump administration. “The countries wish to behave in order to strengthen the confidence of the Biden administration. […]  It is a kind of political performance that some politicians will use to highlight their importance.”

According to the media, the biggest incentive is to imitate Lithuania that is believed to be sponsored by the U.S. “After Lithuania, especially many small countries are easily tempted and seduced by large forces like the U.S. These small countries believe that playing the ‘Taiwan card’ is cost-effective and will greatly increase the chances of their country being perceived internationally.” But at the same time, China is confident that these countries are optimistic about China’s future development potential and dare not to switch diplomatic relations. “Slovakia still lacked the courage to directly recognize Taiwan and sever diplomatic relations with mainland China at the diplomatic level, leaving enough room for China and Slovakia to play and mediate.”

Although China has been in a diplomatic war with Taiwan ever since 1949 and does not compromise on the Taiwan issue, recent developments in Europe show that some countries are willing to engage both with China and Taiwan. In past, Slovakia had attached too much importance to a partnership with China, especially in the context of the Chinese Belt and Road Initiative or the 17 + 1 cooperation (now 16 + 1), and avoided engaging with Taiwan for fear of angering Beijing. However, with more emphasis on democratic values ​​and human rights from the side of Slovakia’s current government as well as the evident potential of economic cooperation, the country’s approach to Taiwan has been gradually reconsidered.

Slovakia similarly to Lithuania realized that the promises of Chinese investments will not materialize to the extent they had been communicated. This is, after all, the reason why Lithuania has left the 17 + 1 cooperation. Unfortunately, giving up on a deal with China and engaging with Taiwan instead is always perceived as an act of betrayal to Beijing. Lithuania has been already facing China’s countermeasures. But in the case of Slovakia, China is still observing and it all depends on the strategy Bratislava will adopt to further engage with Taiwan. Yet Beijing should also realize that its uncompromising stance on the Taiwan question only further contributes to the deterioration of public and expert opinion on China in the West.