Ideology and geopolitics: Chinese reaction to the 1968 invasion of Czechoslovakia 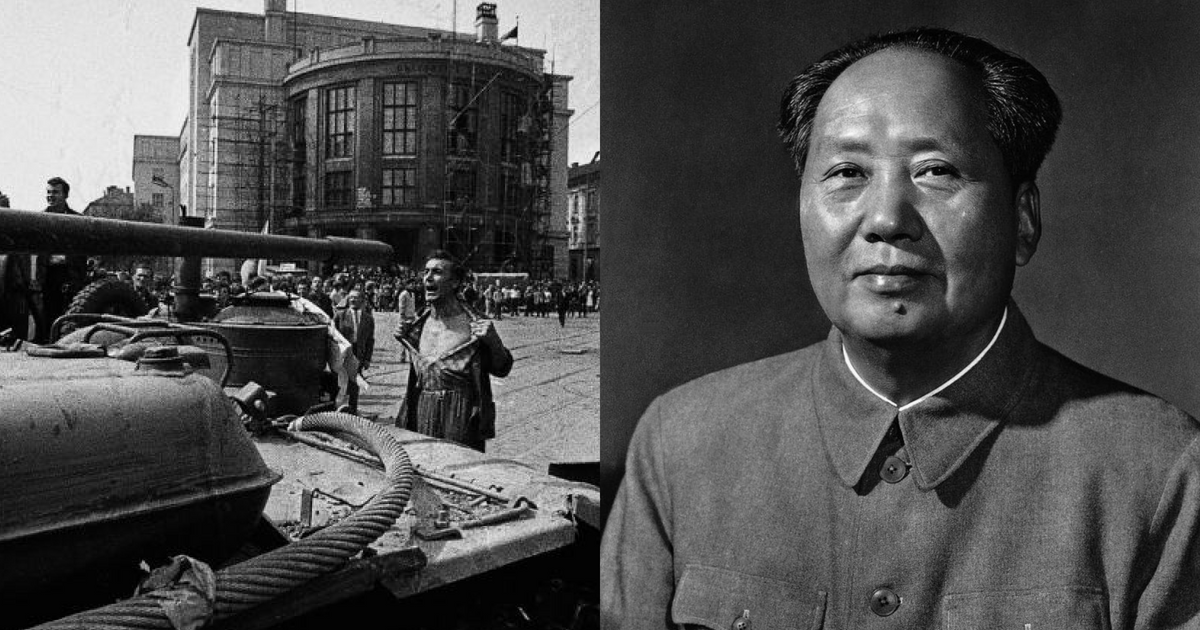 When tanks of the Warsaw Pact countries rolled into Czechoslovakia in the early hours of August 21, 1968, the hopes for building „communism with a human face“ were mercilessly crashed. After the suppression of the Hungarian uprising more than ten years before, the Soviet Union once again proved determination to counter any centrifugal forces within its camp. The invasion deepened the enmity between the Soviet Union and China, former allies that were now on the verge of a full-scale war. For China, the developments in Czechoslovakia were important both for their ideological value and impact they had on the Chinese strategic orientation.

The Chinese reaction to the suppression of the Prague Spring cannot be understood without looking at the internal situation that China was in at the time. In 1966, Mao Zedong unleashed the Cultural Revolution, seeking to root out his rivals within the party and following his vision of continuous revolution. The revolutionary fervour also affected the Chinese foreign policy.

The Soviet Union, now viewed as a revisionist power that betrayed the communist cause, was to be opposed with the same force as the “capitalist roaders” within China. Within the communist camp, China and Moscow grappled for the position of the leader of the world revolution. As the East Bloc countries, including Czechoslovakia, stood on the side of the Soviet Union in the Sino-Soviet fray, their relations with China also saw a virtual freeze.

The August 1968 invasion was a gift for the Chinese propaganda, whose accusations of the Soviet Union of portraying “big power chauvinism” turned into reality with the suppression of the Prague Spring. Beijing’s propaganda machine started to churn out indignations of Soviet actions two days after the invasion waiting to use the opportunity of Zhou Enlai’s speech at the Romanian Embassy in Beijing.[1] Zhou’s speech was carefully prepared and contained elements that would be repeated in all the propaganda channels.

In its reaction, China used the strongest language of condemnations in its repertoire, accusing the Soviet Union of a “monstrous crime”, linking the invasion to Hitler’s annexation of Czechoslovakia. What is more, China claimed support for the struggle of the Czechoslovak people against the occupation. The Soviet action was dubbed as a sign of Soviet socialist imperialism, socialist fascism and colonialism. The Chinese propaganda also mockingly deconstructed the alleged reasons for the invasion as put forward by the Soviets – defending the achievements of socialism, upholding peace in Europe and protecting the security interests of the countries of the socialist family.[2]

Owing to the ideological tone of the foreign policy at the time, the Chinese propaganda contained interesting contradictions. From the Chinese view there were revisionists on both sides and the invasion was a result of “internal contradictions within the revisionist camp”. “The Dubček clique” was just as revisionist as the Soviet leaders in Moscow, both successors of the corruption started by Khrushchev. The Chinese view was that the reason for the Soviet invasion was to prevent Czechoslovakia from turning towards the capitalist West led by the US. At the same time, Chinese propaganda claimed that the invasion was quietly acquiesced by Johnson’s administration in Washington and manifested that the US and the Soviet Union were now ganging up in order to divide the world between themselves, both behaving as hegemonic powers.[3] Chinese propaganda argued that for getting a free hand in Czechoslovakia the Soviet Union would let the US act unhindered in Vietnam.

Furthermore, the Dubcek revisionist clique was condemned for asking the Czechoslovak people not to fight the occupation and (after being forcefully taken to Moscow for “negotiations”) agreeing to Moscow’s demands, thus “shamelessly selling off national sovereignty and interests of the people”.[4] Interestingly, it was argued at the time that by agreeing to Soviet occupation, “the Dubček clique” would be allowed to stay in power and continue with its revision of capitalism. On the contrary, China voiced support for the „heroic struggle“ of the Czechoslovak people – the proletariat that was to be fought against the Soviet and „domestic“ revisionists.

The linkage to China’s domestic situation was obvious. There were to be no concessions in fighting the revisionists – they had to be defeated if the revolution was to succeed. With its statements, China was basically supporting a guerrilla warfare against the occupying forces – again a mirror of Mao Zedong’s stress on “people’s war”. In spite of the apparent contradictions involved, the Czechoslovak case was presented as a danger of revisionists getting in power and thus a warning aimed at the domestic audience. This ideologically based messaging was evident when, remarkably, a mere week after the invasion, the People’s Daily published an article titled “Czechoslovak people love Mao Zedong” without any reference to the invasion.[5]

Lessons from the invasion for China

Except for an exercise in propaganda, the invasion had important impacts on Chinese foreign policy. As for immediate influence, it had been argued that the Czechoslovak invasion had heightened Chinese fear of potential Moscow’s military action against China. Indeed, in a protest note again alleged intrusion of a Soviet aircraft into Chinese airspace on September 15, 1968, Beijing claimed that “the intrusions happening around the time of invasion of Czechoslovakia was not incidental”. Finally, the frictions at the border led to bloody skirmishes in 1969 that almost ignited a full-scale war of the two nuclear powers.

As for a long-term impact, Beijing has changed its reading of the world situation, with the Soviet Union replacing the US as the main enemy of China and the world revolution – looking from the prism of both ideology and security. Although the Soviet Union and the US were both seen as imperialist powers, allying with Washington – that purportedly presented a less of a threat – was now imaginable. Although the road to rapprochement with the US was long, it was after the invasion of Czechoslovakia that it started to take form.

[1] Romania did not participate in the invasion.