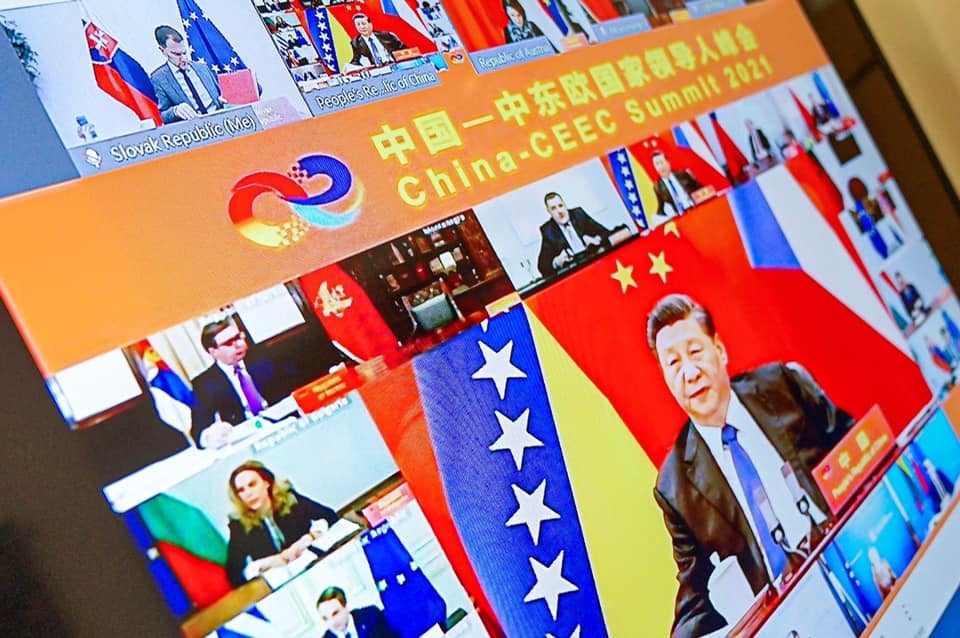 Following the 17+1 summit that was held this February, Chinese media fostered narratives about supposedly lively cooperation between China and the CEE countries.

The timing of this year’s 17+1 summit (held online on February 9, 2021) was especially important in the context of the global challenges represented by the COVID-19 pandemic, the EU’s growing dilemma over China as well as the uncertainty resulting from the transfer of power in the U.S. As quoted by an expert in Global Times it was “held against the backdrop of Biden trying to befriend Europe.” While the world is awaiting the new U.S. foreign policy to be implemented and some of the old strategic partnerships re-established, it was essential for Beijing to “send a signal to the U.S. that the cooperation between China and the CEE countries will be consistent and won’t be affected by political changes in the U.S.”

Although this statement might sound reassuring to the Chinese domestic audience, the reality shows signs of growing caution and perhaps the reluctance of the region towards the Chinese cooperation mechanism. One particular example to suggest this could be the fact that despite Xi Jinping’s obvious attempts to elevate the summit to a ‘head of states level’ by personally attending it, only five CEE countries were represented by their presidents and six demoted their participation by sending in ministers only. However, Beijing does not admit setbacks, and thus Chinese media set on hard work to domestically promote the 17+1 mechanism’s successful story and Xi Jinping’s claims that 17+1>18.

When the platform was established in 2012, the then 16+1 was received with a lot of enthusiasm and hope. Prospects of investments and local infrastructure projects made the CEE countries compete for China’s favor to gain the most of benefits coming from the ‘lucrative’ cooperation. Yet, nowadays in the CEE region, it is more or less clear that most of the Chinese promises remain hollow and never materialized, Chinese media claim that the platform has set a new model of China’s cooperation with the CEE countries. They assure that the platform “has maintained a good momentum of development. Although the epidemic and other factors are disturbing the cooperation from time to time, the work under the 17+1 framework has been progressing in an orderly manner.”

As for the prospects of the mechanism, China projects similar confidence: “The cooperation mechanism between China and Central and Eastern European countries […] is becoming more and more perfect and has become a new growth point for China-EU economic and trade cooperation. It is foreseeable that in the future, while this mechanism will inject new momentum into the development of relations between China and Central and Eastern European countries, it will also continue to become an important engine for deepening China-EU comprehensive strategic partnership.” To back up this rhetoric, several outlets produced articles analyzing the possible areas of further cooperation in line with the 2021 Beijing Action Plan. Promising news was published on imports of agricultural products and e-commerce as well as sensational reports about “quality products coming from the CEE countries lighting up China’s New Year.”

Finally, to further promote the idea of the platform’s success, the media reported about the eagerness of the few exceptions in the region to strengthen the partnership, such as the Hungarian Prime Minister Orbán or the Czech President Zeman who was quoted saying “Facts have proved that China is our true friend.” The same article also referred to the former Polish Vice Prime Minister Kovodko whose optimism and enthusiasm over the future cooperation “represents the general expectations of the CEE countries to deepen cooperation with China.”

While in Europe the narrative after the summit tends to focus on the fading enthusiasm over the platform, Chinese media consistently emphasize the achievements of the mechanism either in numbers or by actually listing the impressive projects completed in the region. Among these, for instance, the Port of Piraeus in Greece, the Smederevo Steel Plant in Serbia, and the Peljesac Bridge in Croatia.

Interestingly, reports covering news related to the withdrawal from Chinese investment projects in the region, such as in the case of the Romanian Cernavoda Nuclear Power Plant do not focus as much on the real cause of the failure as on blaming the U.S. for conspiring against China and luring its partners away. “The U.S. is launching ‘subversive actions’ against Chinese enterprise projects.”

To save Beijing’s face, the rhetoric of Chinese media, in this case, pushes the idea that the countries are ignorant of their mistake and that the law of markets will eventually show them the superiority of Chinese abilities in carrying out the projects.

An arrogant and taunting language is used especially when targeting America, such as “the U.S., which is good at sabotage, is not willing to do tiring and hard construction work. Those little minions who blindly follow the United States will sooner or later sink into regret after discovering that the gains are not worth the losses.”

In Europe, which has been seeking to adopt a more coherent approach towards China, concerns still exist about the 17+1 mechanism’s disruptive effect. Growing dependency on China’s economy of some member states as a result of their own China policies is perceived as a risk undermining the European unity. On the other hand, the rhetoric of Chinese media in this case again shows the effort of highlighting the platform’s importance in contributing to the region’s development and integration.

Some reports, therefore, addressed the issue as an unfunded concern of the EU resulting from lack of confidence and internal struggle with growing nationalism in many of its member states. The ‘successful results’ of the sub-regional cooperation are even elevated to the point of having “gradually eliminated the EU’s worries about the mechanism’s effect on dividing Europe.” And contrary to the EU’s worries, the mechanism “strongly promotes the integration of a troubled Europe in order to foster an overall balance of China-EU relations.”

Contrary to the claims about the unity and balanced relations with the EU member states seem to be the actions behind China’s so-called ‘vaccine diplomacy’. As part of the 17+1 cooperation in the area of public health and the fight against the COVID-19 pandemic, China offered its vaccines to the CEE countries. While Serbia and Hungary have obtained the first doses, Poland and the Czech Republic just made their requests. Immediately after Chinese media produced titles, such as ‘Two anti-China countries, asking to forgive and forget past grievances, call to China in need of vaccines.”

Xi Jinping stressed out that the 17+1 cooperation has “no political strings attached.” And yet, Chinese outlets reminded promptly of the turbulent development of the bilateral relations with the Czech Republic in recent years. An article claimed that “in order to re-establish cooperation channels between the two countries, the Czech government must urge certain politicians to stop the wrongdoings that damage the feelings of Chinese people and effectively protect Chinese companies and individuals. Only in this way can the two sides be able to carry out normal cooperation in the field of anti-epidemic.” This would suggest that contrary to Xi Jinping’s claims, Chinese vaccine aid is in reality attached to certain political preconditions. It could appear so as well in the case of Serbia, that could have gotten vaccines as a result of Vučić’s courting goodwill from China. At least that is the way media make it sound by claiming that “the facts have proved that Serbia’s efforts to improve its relations with China have been rewarded. The best proof is that the country’s vaccination rate is far ahead of other countries.”

Beijing’s attempts to promote the image of a reliable ally in fighting the COVID-19 on the international scene go as far as to question the effectiveness of the EU and the U.S. in distributing the vaccines. In this context, unsurprisingly the effort is put on emphasizing the superiority of Chinese vaccines and on propagating it as a better alternative. “In the international community, more and more countries have begun noticing China, and voices in Germany have also begun to urge the government to import Chinese and Russian vaccines. This situation gives an affirmation to China’s vaccines, and it once again proves that China’s trustworthiness is more than just empty words.”

Behind Beijing’s vaccine diplomacy is thus possible to identify China’s growing assertiveness in trying to enhance its footprint in the region, where it competes with the U.S. for influence. Noted should be the rhetoric in some articles, that shows clearly how China aims to secure partnerships even at the cost of the EU’s unity. Especially at the time when the EU’s late order and approval of vaccines as well as the U.S. ban on vaccine exports leave some countries seriously affected by the virus with little choice. “The EU, which facing the COVID-19 epidemic once claimed to be unanimous, has now its members acting on their own. Obviously, it is meaningless for the Czech Republic, Poland and other countries to continue to follow the EU to contain China. After all, it is a country’s primary task to protect its people’s lives. No one can guarantee that the EU will turn hostile again in the future. Instead of charging forward for the United States and Europe, the Czech Republic and Poland might as well embark on an independent diplomatic route.”

Purchase of uncertified vaccines by some EU members or applying member states has been stirring concerns over the unity of the EU in a situation of crisis. In fighting the pandemic, China promised to “work with the CEE countries through solidarity, coordination and cooperation.” However, it is important to keep in mind that these principles should not apply bilaterally between individual states and Beijing at the cost of the EU’s foreign policy coherence towards China. This should equally matter in economic relations, where China projects determination in boosting the confidence in the economic recovery of the CEE countries by deepening the 17+1 partnership in the post-epidemic era. Whether there are going to be any substantial improvements in so far rather stagnating economic cooperation within the platform is yet to be seen. At least Chinese media did a good job at convincing its domestic audience that the platform’s development is remarkable and its role in the CEE region is essential in a “world [that] is currently in deep recession, and mankind is facing multiple crises rarely seen in history.”