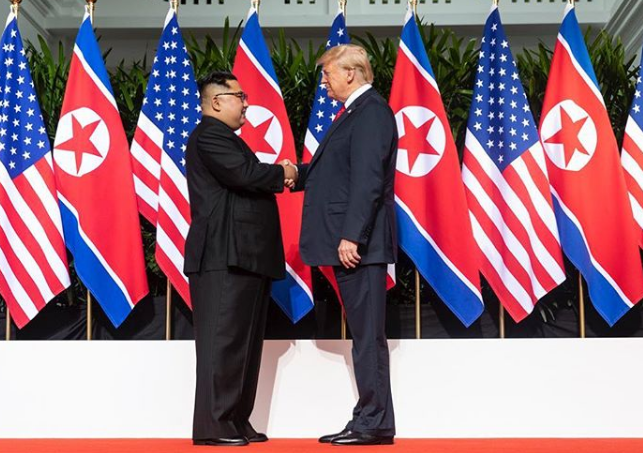 Kim Jong-un said: With our reliable and effective self-defensive nuclear deterrent, there will be no more war on this earth, and our country’s safety and future will be secured forever.

How much is this pompous statement a usual reminder that North Korea is not going to get rid of its nuclear weapons (probably) no matter what, and what does it mean for the future of nuclear negotiations?

Andrej Matišák has asked several experts about their opinion on the matter.

North Korea’s nuclear weapons are the North Korean regime’s most important international strategic asset and an important domestic one as well.It is very unlikely that North Korea would give them up in the foreseeable future.

Kim Jong Un wants to make it clear to the international community that North Korea has little intention of abandoning its nuclear weapons. Kim made the deterrent feature of nuclear weapons explicitly clear in his speech. Moreover, by highlighting how nuclear weapons would prevent the DPRK from engaging in conflict, Kim has left the door to negotiations with the US slightly ajar. North Korea’s openness towards a peace treaty to end the Korean War, has not diminished. Yet, Kim did not mention sanctions in his speech, highlighting how the DPRK may be focussing on three key goals: international recognition as a nuclear-armed power; domestic economic development; status quo regime survival.

The North Koreans have been saying for years that they are now safe because they have nuclear weapons, so there is nothing new in this assertion. Saying it has not ruled out continued negotiations in the past, and I do not think that it will do so now. Their nuclear arsenal is tiny and no match for China, Russia, or the US. Just another way of saying we do not need to talk to you – unless you make the right offer.

Kim Jong Un’s statement was directed at veterans of the Korean War, his nation, and the United States and made on the occasion of the 67th anniversary of “Victory Day,” otherwise known as Korean War Armistice Day (July 27, 1953). It’s a loaded statement, simultaneously as a reminder of the pains of the past, present, and the unfinished business of completing the revolution, that is, dominating the South and reunifying the Korean peninsula. It’s also an implicit threat at the US on the eve of the upcoming presidential election. Kim is trying to goad Trump into returning to “denuclearization of the Korean peninsula” negotiations before the Nov 3 election and resuscitate his floundering North Korea policy.

Kim has stated several times before that his “treasure sword,” nukes, are not for sale. Hence, the statement itself is not a new or newly ominous. At the same time, the timing of it, now, with fewer than 100 days to go before the US election does put psychological pressure on Team Trump. So, it’s quite clever.

Yes, Kim’s statement is pompous, but when isn’t North Korea’s messaging to the outside world no innately vainglorious?  I don’t think Kim’s statement has any bearing whatsoever on denuclearisation negotiations because denuclearisation has long been a dead letter (even prior to the summit frenzy of 2018-19).  As I’ve argued many times previously, US-DPRK diplomatic interactions may happen in the future, but if US negotiators think that the nuclear program is on the table then the talks will collapse, as they have done repeatedly in the past. The United States under Trump is the weakest it has ever been during its hegemonic cycle.  That some in the US think that CVID is still a possibility says more about their out-dated hegemonic blinkers and misunderstanding of Washington’s leverage in Korea, than it does about the actual likelihood that carrots and sticks could bring North Korea to nuclear relinquishment.  The window for CVID is closed.

On Kim’s ‘pompous’ remarks on the DPRK’s nuclear forces, I think this has been their preferred public policy line for some years. The reason I can say this is that I prepare an annual regional security outlook for the Council on Security Cooperation in the Asia Pacific (CSCAP). The DPRK is a member of CSCAP and its officials occasionally attend our conferences and study groups. Each year, I commission assessments from analysts from around the CSCAP space to provide the foundation for my own overall assessment of how the region is traveling. The only time I succeeded in attracting a contribution from the DPRK it was in 2016 and the topic was the DPRK’s nuclear program. That paper was obviously officially sanctioned and the thrust of the argument was precisely the huge favor the DPRK had done for peace on the Korean peninsula, in greater Asia, and indeed the world by creating a reliable nuclear deterrent. This paper was published in CSCAP Regional Security Outlook 2017 and it can be found at www.cscap.org.