Multilateralism as a tool in Slovak China policy: The case of 16+1, V4+China, and EU+China

Home Publikácie CEIAS Papers sk Multilateralism as a tool in Slovak China policy: The case of 16+1, V4+China, and EU+China 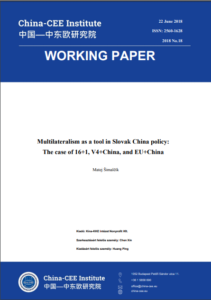 The policy paper by Matej Šimalčík analyzes Slovak policy towards China. With the passing of the Conception of developing the economic relations between Slovak Republic and People’s Republic of China 2017-2020, Slovakia aims to improve its relations with China. At the same time, Slovakia did not pay such high attention to the 16 + 1 forum in the past as some of its neighbors, even though the 16 + 1 is viewed often as the most important tool for China to deal with Central and Eastern European countries. This paper is examining the question of how Slovakia is using various multilateral fora to further its relations with China. Specifically, the paper looks into what use do formats such as 16 + 1, V4 + China and EU + China have for achieving Slovak foreign and economic policy goals vis-à-vis China. To this end, the paper will examine the major policy documents of Slovakia (both general and China-specific) as well as declarations by key political stakeholders and their actions. This allows to get a comprehensive picture of what role the various fora play in pursuing the national interests and successful execution of Slovak China policy.

You can read the full paper here.