Public Opinion Can Make or Break the U.S.-EU Alliance on China 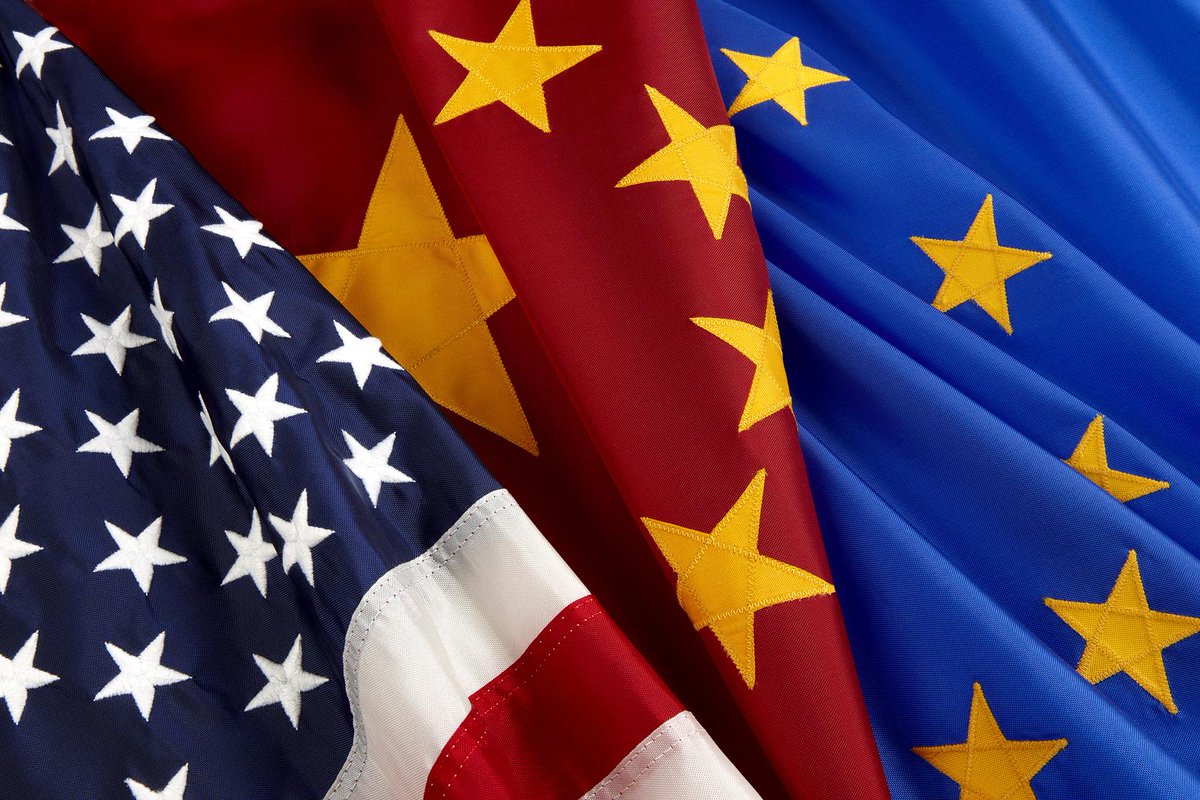 To effectively coordinate with the EU on China policy, the U.S. needs to consider European public opinion.

Since the Biden administration took office in January, debates on the possibility and extent of policy coordination on China between the EU and the U.S. have been reinvigorated. The deteriorating human rights situation in China, as well as the recent imposition of asymmetric counter-sanctions by China on EU officials and members of European civil society — in response to the EU’s targeted sanctions on Chinese officials for human rights abuses in Xinjiang — may act as a catalyst for transatlantic policy coordination.

However, insights from recent public opinion polling among Europeans by the Central European Institute of Asian Studies (CEIAS) and Sinophone Borderlands project at Palacky University show that if the U.S. seeks a lasting alliance with the EU, it needs to pay closer attention to its own image in Europe, as well as the aspirations of the broader European public.

Prospects of policy coordination are affected not only by changing perceptions of China, but also of the U.S.

According to our survey, EU nationals’ view of China has significantly deteriorated in the past three years. In nine out of 10 EU member states included in the survey, more respondents see China negatively rather than positively (Latvia being the exception). The most negative views can be found in western and northern Europe — more than 60% of German, Swedish and French respondents have either very negative or negative views of China. Even though those from southern and central European member states are slightly warmer towards China, negative opinions still prevail. 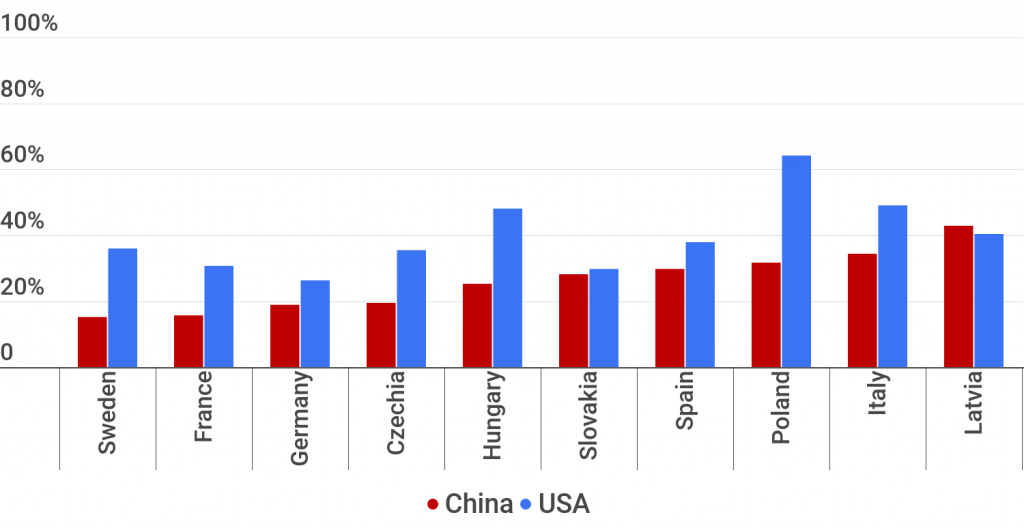 Even though there is a generally negative trend for Europeans’ view of China among Europeans, the U.S. does not fare much better. Although perceptions of the U.S. are more positive, overall confidence in the U.S. is not high. In Latvia, more people see China positively than the U.S. In Slovakia, the U.S. and China record similar levels of positive views (with Russia outperforming both), while more people see the U.S. negatively than China. In Germany and France, both key EU member states, the U.S. does not fare much better — only 26% of Germans and 31% of the French people see the U.S. positively (in the case of China, it is 19% and 16% respectively). In the case of France, the U.S. is also seen more negatively than China, thus it is a more polarizing actor than China. 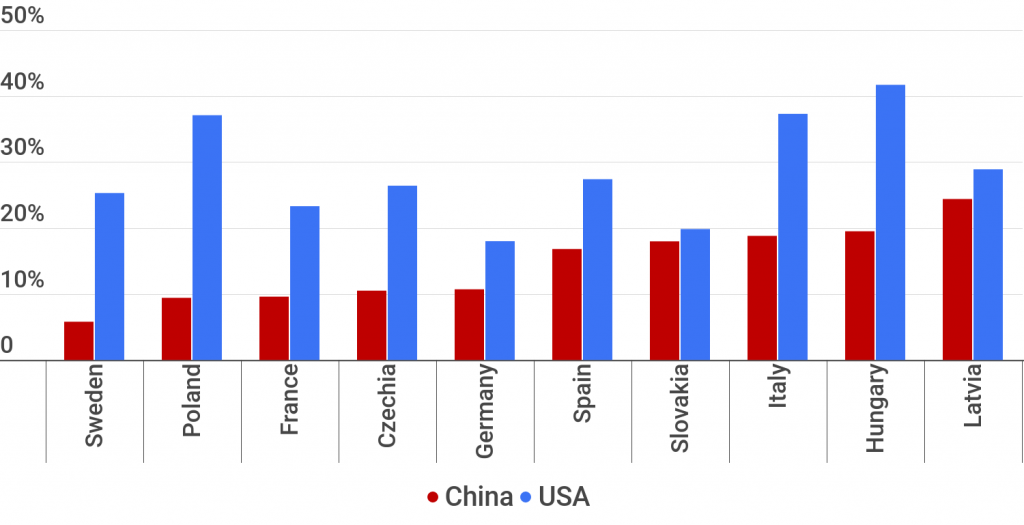 Addressing China, but what to address?

This growing negative sentiment toward China contributes to the increasing demand for a confident European policy on China.

Foreign policy preferences of the European public echo the EU’s policy trifecta of seeing China simultaneously as a partner, a competitor, and a strategic rival. 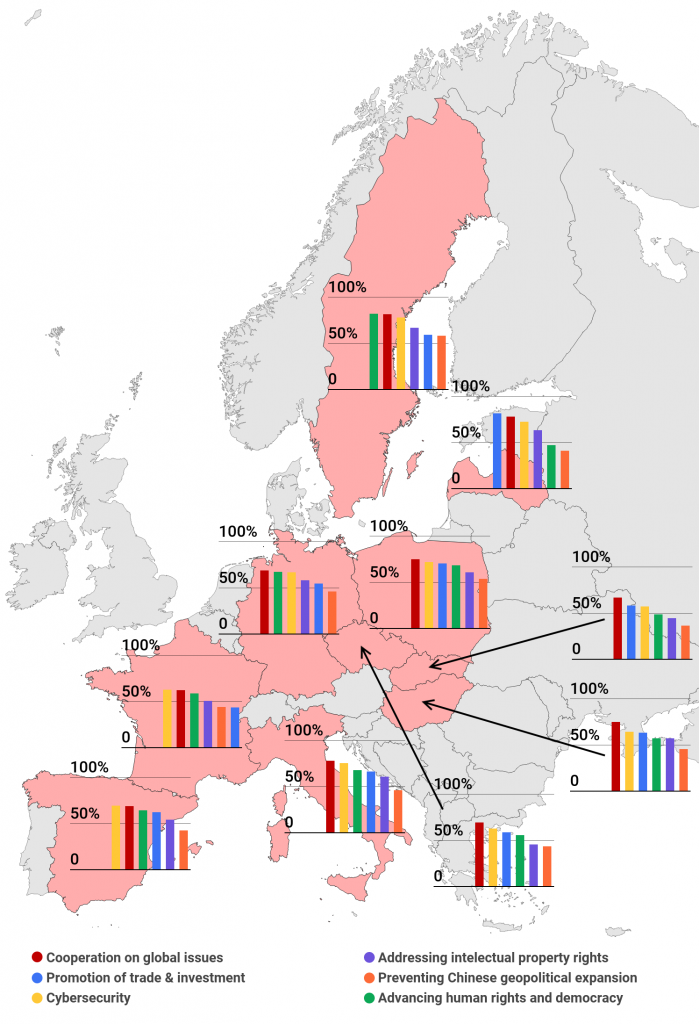 Countering China’s geopolitical expansion is the least favored policy option among respondents. This attracts majority support in just two of the 10 polled EU member states — Sweden and Poland. Even there, it is the least popular option of the six.

On human rights, Germany is a case worth examining. The promotion of human rights is the second most-favored policy option among respondents and almost half the population thinks that Germany should pursue this policy even if it causes economic damage.

Where does this leave the U.S.?

There are two implications from this survey for the U.S. and its quest for deeper coordination with the EU on China.

To improve the likelihood of the Europeans accepting a more coordinated approach with the U.S. vis-à-vis China, the Biden administration needs to invest in building goodwill among Europeans.

Second, European convictions about the appropriate approach to deal with China further constrains the U.S. in achieving broad policy coordination with the EU and its member states. Since there is very little European desire to challenge China’s geopolitical expansion, a fully-fledged alliance between the EU and U.S. is unlikely. However, a constructive relationship in some areas is possible. Agreeing to joint policies toward China on climate-related issues, joint cybersecurity (e.g. on 5G), or jointly confronting human rights abuses in China are all areas where coordination should be not only possible, but also welcomed by European public opinion.

The Biden administration can achieve success with careful and targeted policy proposals which reflect European as well as U.S. interests. Failure to do so risks further alienating European public sentiment from the U.S., putting future policy coordination on China (as well as other issues) in peril.

This article was originally published by The Center for European Policy Analysis (CEPA).